The fes­tival will include three student-directed one-act plays: “Hello Out There!,” “The Bear,” and “Wanda’s Visit.” In between these per­for­mances will be two 10-minute plays: “Take to the Moun­tains!” written by senior Brooke Benson, and “The Life and Death of George Wash­ington,” by junior Austin Benson. All five one-act plays will be per­formed at 8 p.m. Thursday and Sat­urday, and at 2 p.m. Sunday in the Sage Center for the Arts. Ticket reser­va­tions are required.

Though the plays are mostly comedies, “Hello Out There!” by play­wright William Saroyan and directed by junior Katherine Buursma deals with more serious themes. Rel­a­tively simple staging con­trasts the psy­cho­logical com­plexity of the show in which a jail care­taker falls for an accused rapist.

“She starts talking to this young man, and he’s this suave kind of bad boy, and they hit it off,” Buursma said. “It’s a question of if he’s being sincere and really wants to marry her and take her to San Fran­cisco like he says, or is he just trying to get out? So is he sincere or just being a slime ball trying to escape from prison? And is he right­fully accused or wrongly accused?”

In “Wanda’s Visit,” written by play­wright Christopher Durang and directed by junior Jessica Mac­Farlane, life for a sub­urban couple in their 40s is tem­porarily dis­rupted when the husband’s ex-girl­friend from high school stops by to visit.

While the show is a comedy first and foremost, Mac­Farlane said it also deals with the more serious themes of mar­riage and long-term part­nership — an aspect she said she wanted to balance with the humor as the play’s director.

“I’m trying to walk the line between having that come through and having people still laugh at it,” she said. “The script is great.”

The third of the longer one-act plays, “The Bear” by Anton Chekhov, will be directed by senior Nikolai Dignoti. It tells the story of a boorish man who comes to collect money from a recently widowed woman whose late husband owed the man a debt.

The two student-written one-act plays will be directed by Pro­fessor of Theatre George Angell. Both were written last spring for a seminar in play­writing. “Take to the Moun­tains!” shows what happens when two Mormons knock on the door of a man who thinks he’s Han­nibal Barca about to take over Rome. “The Life and Death of George Wash­ington,” another comedy, tells the story of three high-school stu­dents who travel back in time to interview George Wash­ington for a history paper. Both Brooke and Austin said they enjoyed seeing some of their favorite pieces that they’ve written come to life onstage.

“My hook when I’m telling people about the show is that George Wash­ington dies twice in ten minutes,” Austin Benson said.

The plays span a variety of times and themes, and both Buursma and Mac­Farlane said they have enjoyed the chal­lenge of directing a play and are proud of the effort the actors have put into the show. Buursma added that “Hello Out There!” has a lasting quality.

“Art is sub­jective, so regardless of your training, there will be some­thing you can appre­ciate,” Buursma said. “There will always be a critic and always be a fan. It might not be everyone’s favorite play, but it’s stuck around since the 1940s, so there’s some­thing to be learned from it. So that’s what we’re setting out to do — to make great art.” 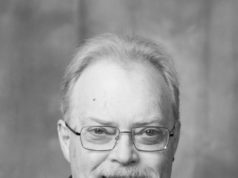 Farewell to Angell: Director of Theatre retiring at end of season 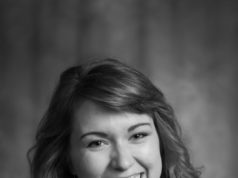 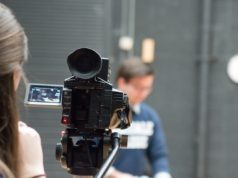 Students face the camera: Western Michigan University professor comes to campus to teach course in acting for film and television