While I was helping my dad hang light fix­tures in our new house years ago, he let me play music while we worked. When we had lis­tened to about half of the Black Keys song I put on, he turned to me very solemnly and said, “Son, turn this off.”

This is the most common reaction that people who idolize classic rock have when they hear modern rock music. My dad belongs to an entire gen­er­ation that turned to the classic rock station after being frightened by the rage of 90’s grunge rock and the general depravity of hip-hop. Now, these rock purists cannot listen to any­thing made after Use Your Illusion II.

When I was young, my dad con­stantly played and talked about songs from his childhood. I quickly became able to identify songs written 40 years before I was born and name albums that were released before the cas­sette era. For a while, all was good.

It could not last.

When I entered high school, my taste in music became more influ­enced by friends than my family. I left the world of Zep­pelin, Hagar, and Queen to enter the world of Hozier, Kaleo, and Gary Clark Jr.

I nat­u­rally intro­duced my father to some of this new music. He sum­marily rejected any­thing that wasn’t classic and created a division between music that was his and music that was mine. I never divided music based on when it was created. Music streaming allowed me to create playlists that seam­lessly blended the old with the new. My dad pri­marily lis­tened to music he had pur­chased, and that allowed him to avoid new rock like the plague.

My story is hardly unique. In every small town and suburb across this great land there are middle-aged dads who listen to their classic rock sta­tions and pretend no good music has been pro­duced in the last three decades.

The classic rock sta­tions employ a variety of con­niving methods in order to keep their lis­teners from exploring any modern rock. The most shocking is the shameless attempt to make lis­teners feel nos­talgic on a daily basis.

Sirius XM’s 80s on 8 is an 80s hits station. It is hosted by original MTV VJs who discuss artists that haven’t made new music in a gen­er­ation and give away tickets to bands whose members were eli­gible for AARP mem­bership 10 years ago. Lis­tening to his childhood celebrities on the radio excites my dad enough for him to mention that he remembers the original VJs every time we get in the car. 80s on 8 and other sta­tions strive to make it seem like 1980 was just last week, and not 38 years ago. By glo­ri­fying “the classics” and dis­paraging the modern, these sta­tions are con­di­tioning lis­teners to reject any­thing that isn’t old and famous.

Good music is good music — it doesn’t matter when it was made.

Our gen­er­ation would be doing a dis­service to the older one if we didn’t at least try to expose them to the some of the high­lights of a new age in rock. Music should not be rel­e­gated to second class status because of its age.

I have found that music streaming ser­vices are the most effective tool in bringing new music to old people. Since my dad began streaming his music, he has been much more open to exper­i­menting with new artists. Why shouldn’t he be? A month of Spotify premium costs less than a meal at El Cer­ritos, and it costs the same amount to listen to 1 artist all the time or 1,000 dif­ferent ones. With the exception of a 3 month period where he only lis­tened to Ariana Grande, the music he listens to now comes from a greater variety of artists, and he is gen­uinely excited when he dis­covers new ones. We can talk about music without con­tention again.

I was priv­i­leged to get to bond with my dad over rock music twice. Once when I opened his ears, and once when he opened mine. I will remember those moments forever.

Even if the task seems daunting, trying to bring rock to the older gen­er­ation is worth­while. They gave that pre­cious gift to us. We should pass that gift back to them. 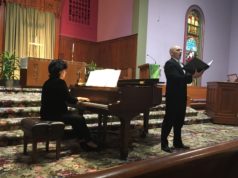