She is a lover of art, a divorcee, a bleeding heart, a sojourner in Rome. He is an Italian, a kindred spirit, a lover of ancient art and aged wine. They fall in love — with each other and with the timeless beauty of the ancient city that brought them together.

This is a novel pub­lished by a Christian press, and one that richly depicts a story of redemption and hope.

Unfor­tu­nately, you’ve heard it before.

It is also the bare outline of “Unveiling,” a reissue of Suzanne M. Wolfe’s first novel, pub­lished under the same title thirteen years ago by Par­a­clete Press, an ecu­menical Christian pub­lishing house founded by members of the Bene­dictine order. It is the sort of art most trou­bling to me as a Christian and an aspiring artist: the deflated artwork whose lofty goals of Christian uplift are not sus­tained by its lit­erary merit. “Unveiling” is a deeply felt novel, but not an impressive or even con­vincing one. Its trite plot, its flat char­ac­ter­i­zation, and its over­wrought prose prompts that sad con­so­lation, for both reader and writer, that its “heart is in the right place.”

The novel follows Dr. Rachel Piers, recently divorced and worn thin by her career as a prominent art his­torian and restorer, to a cathedral in Rome where she restores a long-revered and blackened triptych — and her soul. The paper-thin plot flutters around a hot-stuff museum director who wants to steal the trea­sured object of worship for a big nasty museum. But mostly, the story is about the restoring of Rachel’s heart, through art, through love, to the stir­rings (we don’t want to get ahead of our­selves here) of faith. Like Rome itself, “Unveiling” is a “tableau of faith renewed, reaf­firmed, reen­acted again and again, ad infinitum,” Wolfe writes.

Blessedly, the tableau of Wolfe’s work is much broader than her fiction: Wolfe has pub­lished one other novel since the original “Unveiling,” but she has spent much of her career in posi­tions that support the nar­rative art that she loves: she teaches at Seattle Pacific Uni­versity. She co-writes books with her husband, Greg, on prayer. She’s an Anglophile; she studied in Oxford (she’s the co-founder of the C.S. Lewis Society) and is drafting a trilogy of novels set in Eliz­a­bethan London.

How does an outfit like little Seattle-based Image, far from the New York pub­lishing pow­er­houses, hook big fish like that? Because the Wolfes under­stand how faith-based art works, as their mission statement claims: “the great art that has emerged from these faith tra­di­tions is dra­matic, not didactic — incar­na­tional, not abstract.”

Wolfe, then, is the picture of a pow­erful pro­moter of art, and the best kind: the art that inspires faith — in itself, in humanity, and at its height, in the divine.

But all this only makes “Unveiling” more dis­tressing: Wolfe writes with motherly and writerly love about her pro­tag­onist, who over­comes rape, mis­car­riage, divorce, abortion to redis­cover love with Donati, her fellow art his­torian. Through her descriptive prose, Wolfe intends that her readers fall in love with Rome, as well. A res­ur­rection story, in full color. Who could resist it?

Well, anyone who believes Rachel’s med­i­ta­tions are out of char­acter for an as-yet agnostic, or for anyone outside Wolfe’s ser­mo­nizing reflec­tions. Too fre­quently, Wolfe’s novel re-enacts the perennial fall of overtly Christian lit­er­ature; it slips into didac­ticism in pre­cisely the way the journal she co-founded tries to avoid.

Unless, of course, the rar­efied ground of “Christian novel” jus­tifies Rachel’s rise to the spir­itual soapbox. On this inter­pre­tation of Christian art, readers are for­bidden to turn a deaf (or critical) ear to the rum­blings of a human turn toward the divine. Art be damned; a few extra adjec­tives can be chalked up to enthu­siasm. A tin ear for speech never stopped the Spirit. And let’s be honest: Rap­turous reawak­enings of faith are refreshing. They’re some­thing you don’t see anymore in the “lit­er­ature” of these gray and latter days.

I wish I could be so pious in my book-browsing. But I’m a fallen woman and a par­ticular one, and I can’t see past my own artistic stan­dards. The test for Christian art, for me, is the way the writer’s Chris­tianity relates to its artistry, and it appears in the mission state­ments of the two pub­lishers, Image and Par­a­clete. As a “pub­lisher of essential Christian wisdom,” Par­a­clete takes seri­ously the work of its namesake, none other than the Holy Ghost himself, since its name means “advocate” or “coun­selor.”

Par­a­clete, an ecu­men­tical monastic com­munity of around 300 members, pub­lishes books like “Be Still and Listen: Expe­rience the Presence of God in your Life,” “Catholic Wisdom for a Mother’s Heart,” and “Horses Speak of God.” Vis­itors to their website can self-seg­regate by clicking tabs for “Catholic resources” and “Protestant resources.”

Paraclete’s work is devo­tional, and the devo­tional nature of Wolfe’s work bleeds through, as well: “This was the grace the triptych bestowed, the sig­nif­i­cance of the com­passion in the face of the Mother as she held her Son, that somehow, mys­te­ri­ously, she was not merely a passive observer but a par­tic­ipant in the drama of sal­vation, a drama Adrianna [the triptych’s artist] not only shared but passed on, like a gift, to the viewer,” Wolfe’s Rachel exhorts in a par­tic­u­larly min­is­terly mood.

The mature Christian faith of the author is on full display here. I respect it. But when it poses as art, it over­shadows its subject, and that is a trans­gression that, to me, borders on sin.

Yet Wolfe’s res­ur­rection and restoration nar­rative is pow­erful enough to con­vince the ven­erable Annie Dillard: “Unveiling,” she blurbed, “Probes the myriad layers of meaning in art, the human soul, and ulti­mately the world itself.”

Listen to what Dillard writes, not what she blurbs. For art, read Annie. Follow Henry James or Ernest Hem­ingway or, hell, Livy himself, to Rome. For the same good you’d get from “Unveiling,” just grab your devotional. 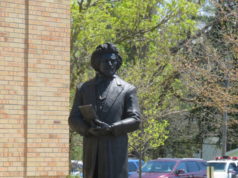