While some stu­dents headed to Florida for spring break in search of good weather, the Hillsdale golf team headed to North Car­olina to play at one of the most his­toric golf courses in the country. Founded in 1895, Pine­hurst Resort is home to nine golf courses; most famous among them is No. 2, the three-time host of the US Open and one-time host of the PGA Cham­pi­onship.

The team spent five days playing the dif­ferent courses of Pine­hurst and nearby Mid Pines Golf Club to gear up for the season. Junior Andrew Grayson noticed good things from the team during the week.

“Everyone improved throughout the week and I think there are signs of a promising spring ahead of us,” Grayson said.

Under the Car­olina sun, the team found great oppor­tu­nities to improve by playing one of golf’s best and hardest courses: Pine­hurst No. 2. The course was designed by leg­endary course architect Donald Ross who also designed the other player-favorite, Mid Pines, and fea­tures the local terrain of the Sand­hills region of North Car­olina from tee to green.

“The course is very rugged and full of sand and scrub grass once you’re off of the fairways,” head coach Nathan Gilchrist said.

As far as playa­bility, the unique rough posed less than half of the chal­lenge to the players according to sophomore Sutton Dun­woodie. Approach shots would roll right off of the green just like they did during the 2014 US Open, the last year the course hosted the event.

“Tee to green, it isn’t really that chal­lenging, but then it gets brutal around the greens,” Dun­woodie said,

“When you hit a green and it rolls off, it was tough to get mad because you think, ‘Wow. That’s what’s sup­posed to happen at Pine­hurst.’”

This aspect demanded  pre­cision from the golfers both with approaches and chips onto the green, according to Gilchrist.

“The most dif­ficult part of the golf course is the green com­plexes,” Gilchrist said, “The demand for No. 2 is getting and keeping the ball on the putting surface.”

By playing demanding courses like Pine­hurst No. 2 and Mid Pines, the players were able to sharpen important aspects of their games in prepa­ration for their most recent tour­nament in Ken­tucky last weekend and the rest of the tour­na­ments this spring. Even more, the team was able to have fun while they were at it.

“Pine­hurst is the ultimate buddies trip des­ti­nation, allowing us to play a new course every day and get in as many rounds as we can before the season begins,” Dun­woodie said. 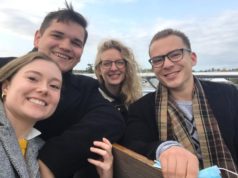