A man with absurd ’90s glasses sits in a living room. He responds to an inter­viewer: “Everyone remembers The Incident dif­fer­ently and that’s a fact. Some people honest-to-god remember Tonya whacking Nancy herself.”

The scene flashes to a woman in a pink figure-skating costume bringing down a baseball bat on a fallen figure.

The woman in pink is Olympic figure skater Tonya Harding. The woman under the baseball bat is her com­petitor Nancy Ker­rigan. This is The Incident: the attack on Ker­rigan in 1994 and the subject of the film “I, Tonya.”

Con­flicting accounts define the 1994 scandal, accounts the movie’s film editor Tatiana S. Riegel and its leading lady Margot Robbie — both nom­i­nated for Oscars — must wade through in their under­taking of Tonya’s story. They must untangle con­fusion and con­tra­diction in an attempt to create a nar­rative. And they do, flaw­lessly and hilar­i­ously.

The above version of The Incident — “Tonya whacking Nancy herself” — is only one version. And it’s just plain sen­sa­tion­alized. The facts are not as easy as Tonya Harding at the Ice Rink with the Baseball Bat. The only fact is that nobody agrees. Memory con­fuses fact. Sen­sa­tion­alism replaces memory. This is the movie’s chal­lenge.

But here’s the verdict most sober people accept: In 1994, less than two months before the Winter Olympics in Lille­hammer, Norway, Ker­rigan left her practice rink in Detroit and was clubbed on the knee with a retractable police baton by a hit-man, whom the FBI later con­nected to Harding and her ex-husband, Jeff Gillooly (the ’90s glasses guy).

It’s spec­u­lation over the extent of Harding’s knowledge of and involvement in the attack that mad­dened the America of the 1990s.

“I, Tonya” under­takes the chal­lenge to capture and com­prehend the dis­parate events leading up to The Incident and its sub­se­quent fallout by re-enacting and fitting together — as the opening text frame spec­ifies — “irony free, wildly con­tra­dictory, totally true inter­views with Tonya Harding and Jeff Gillooly.”

A film with so many nar­rators can look like a Picasso por­trait in its variety and dis­array: a face with two noses and three eyes. But this isn’t a horror flick, so the movie shouldn’t look like Victor Frankenstein’s Creature. The final product is com­pre­hensive, if not cohesive — and in exe­cution, a really charming Picasso por­trait.

While tackling her master-artist job of stitching together a nar­rative through film frames, Riegel does not merely recognise diver­gences between inter­views’ accounts, but cel­e­brates — even flaunts — them.

But not every scene is as dra­matic as the one I describe above. Some of her cuts are more subtle.

After Tonya first hears about Nancy’s attack, she gets in the car with Jeff and his friend Shawn Eck­hardt (Paul Walter Hauser), to hear, with puz­zlement, their frag­mented squabble about their guilt in the attack of Ker­rigan. As the con­ver­sation goes on and the two men speak more explicitly about The Incident, Tonya becomes less and less vocal, until the camera fails to even show her face.

In the next scene with Tonya and Jeff in a hotel room, Tonya acts ignorant, as though she had never wit­nessed Jeff and Shawn’s sus­pi­cious exchange. How can she be present yet not hear what is said? Riegel presents us with a glaring silence. At this point in the nar­rative, accounts fail to line up, nar­ra­tives clash, and Tonya silently bows out.

Riegel’s isn’t the only Oscar-worthy skill. As the trailers and adver­tise­ments promised, Robbie’s per­for­mance proved a mas­ter­piece. She pouted, fought back, and skated and spun and fell till she bruised.

Yet when I first heard of the casting, Robbie struck me as an unusual — almost ide­al­istic — choice for the role of Harding; her tall stature, imposing cheek­bones, and wide-set almond eyes differ from Harding’s small yet pow­erful body, soft face, and eyes that strive toward the bridge of her upturned nose à la Amy Adams.

Soon after I learned of the ’90s scandal (through the Sufjan Stevens’ song “Tonya Harding”), I asked my mom, who saw all unfold as it played across tele­vi­sions every­where, what she thought of Harding.

When I com­pared Harding’s cute fea­tures to those of Amy Adams, my mom scoffed: How could I compare such a fem­inine actress with the figure skater she remem­bered as “hard”?

With her model body and her past role as Harley Quinn, the DC Comics dia­bolical darling, Robbie cer­tainly brings sex-appeal to Harding’s story. But the casting choice also lines up with public-memory: Robbie’s razor-blade cheek­bones cut ice and knees.

Baseball bat or no baseball bat, Harding stands, as Stevens says, “America’s sweet­heart with a dark twist.” She rises, rags to riches, in her triple-axel marvel to the American Dream, only to fall again in scandal. Robbie cap­tures this grotesque tragedy per­fectly:

Tonya sits before a mirror in her silent dressing room moments before her Olympic Free Skate per­for­mance, smears lip­stick and blush over all her public and per­sonal tragedy, and gives the mirror a gruesome smile through tears and a rat­tling exhale. She’s ready for her final show.

The film has lots of accounts to answer to — Harding’s story, Kerrigan’s pain, hard copy’s hot take, your grandmother’s eager opinion — and Riegel and Robbie undertake the burden and accept it in all its dif­fi­culty and depth.

“I, Tonya” wrestles with truth, a struggle Tonya herself under­stands all too well: “And the haters always say, ‘Tonya, tell the truth.’ But there’s no such thing as truth. I mean it’s bulls — . Everyone has their own truth. And life just does whatever the f— it wants.” 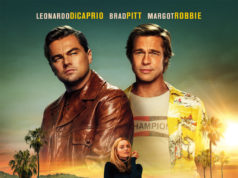 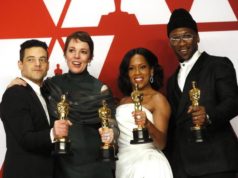 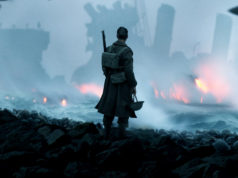