Tucked away on Hillsdale Street is a small brick building with an orange awning called the House of Pizza and BBQ. Most people go for its Ultimate Bar­becue Pizza, but for others, it is a place for gaining new skills and new oppor­tu­nities.

“It’s just packed with the bar­becue taste,” Hillsdale sophomore Nick Uram said after his first bite of this popular pizza. “The pulled pork sold me for sure. That on a pizza, what more could you want?”

Uram and his friend sophomore Isaac Johnson, were there cel­e­brating Johnson’s birthday. People often go to House of Pizza and BBQ for birthday cel­e­bra­tions, including one of Hillsdale’s admis­sions coun­selors, according to Johnson.

“I like the ambiance. It has a culture of its own,” Johnson said.

But this restaurant is known for more than just its ambiance and pizza. They are not open on Mondays because several indi­viduals from Key Oppor­tu­nities, a local non­profit ded­i­cated to helping cit­izens “with hand­i­capping con­di­tions or other dis­ad­van­tages”, spend the day acquiring new skills.

“Key Oppor­tu­nities actually owns the restaurant,” Cas­sandra Champion, House of Pizza and BBQ general manager, explained. “They bought it in July of 2016 to use as a training ground for some of their clients. So on Monday’s when we’re closed, they bring their clients down and they learn food safety, clean­liness, and por­tions. It gives them a broader span of skills.”

The pre­vious owner, Greg Mauldon, opened the House of Pizza and BBQ in April of 2013, but later sold it to Key Oppor­tu­nities due to his busy schedule as an owner of a con­struction business. Now the non­profit uses this restaurant to serve the com­munity with deli­cious food and by pro­viding an oppor­tunity for indi­viduals with any dis­ability to gain new skills and better their lives.

Exec­utive Director of Key Oppor­tu­nities, Julie Boyce explained in a phone interview that pre­vi­ously they were only training their clients on man­u­fac­turing work such as sorting parts and equipment. They wanted to find a way to broaden their clients’ voca­tional skills, and House of Pizza and BBQ fit the bill.

“An entry level job in Hillsdale is often in the food industry,” Boyce said. “And man­u­fac­turing isn’t for everyone.”

Clients of Key Oppor­tu­nities gain real-life expe­rience in the food industry by working at House of Pizza and BBQ. Boyce said they even some­times partner with St. Paul’s Ability Resource Center (SPARC). Skills learned from working at the House of Pizza and BBQ, along with training at Key Oppor­tu­nities were applied when they cater for the Winter Snowball dance hosted by SPARC on Feb­ruary 24.

As a result of these trainings, clients are able to earn cer­ti­fi­cation to work in the food industry. While some go on to work at the House of Pizza and BBQ, others have the option to work at other restau­rants.

“There have been a variety of results. A couple are employed and enjoy the food industry work,” Boyce said. “Several are working on their cer­ti­fi­ca­tions. They like to have the option for some­thing other than man­u­fac­turing work.” 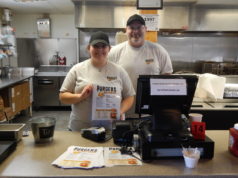