Hillsdale College is on the verge of pur­chasing a closed ele­mentary school from the local school dis­trict, which gave approval for the sale of the building last week.

The college has offered $390,000 to buy Joseph Mauck Ele­mentary School, a vacant building at 113 E. Fayette St. that closed in 2010. Its plans include investing approx­i­mately $5 million to update the building and likely transform it into a center to connect with the public, Chief Admin­is­trative Officer Rich Péwé said.

“Likely we would use it for out­reach ini­tia­tives; however, if we owned the building it would provide the college many options,” Péwé said in an email. “Space is needed.”

“A viable offer has been sub­mitted by the college,” Vondra said. “The dis­trict’s Board of Edu­cation is pleased that Hillsdale College plans to maintain and use the building for college pro­grams. There is a pos­itive feeling about Hillsdale College’s plans for ren­o­vation and improve­ments to the facility.”

The college would fundraise to cover the costs of obtaining and updating the building, according to Péwé.

As Hillsdale’s external presence and pro­grams seeking to bring Hillsdale’s resources to the public grow, the college is finding itself limited in the space reserved for such ini­tia­tives in Moss Hall and the Dow Lead­ership Center. Pur­chasing the ele­mentary school would address those present lim­i­ta­tions, said Mike Harner, chief of staff in the president’s office. The college is looking at moving entire depart­ments and pro­grams to Mauck Ele­mentary.

“There are a number of pos­sible uses,” Harner said. “Office space has become a premium as depart­ments have expanded in the col­leges mission has grown.”

Addi­tionally, the 1.7‑acre lot would provide much needed parking space for large events such as home­coming and com­mencement, Harner added. The dis­trict has per­mitted the college to use its lot for that purpose in the past, Vondra said.

Since Mauck Ele­mentary closed, Hillsdale College has been looking into the pos­si­bility of pur­chasing the building, according to Harner.

Péwé said the college approached the dis­trict at least three years ago, nearly making an offer.

“I don’t think the timing was just right for either party,” he said. “Now it is clear we will need the space.”

The $5 million is an esti­mated amount to update the building that has stood vacant for years. Péwé said the details on that are yet to be set. Addi­tionally, the college is looking to retain the archi­tec­tural fea­tures of the school, which was con­structed in 1939.

“We would want to pre­serve the building, but bring it up to modern stan­dards,” Péwé said.

Hillsdale Com­munity Schools voted to close Mauck Ele­mentary in November 2009 because of declining enrollment and to save on costs. After stu­dents left for the summer in 2010, the dis­trict has only used the property for storage and does not have future plans for it, Vondra said.

The dis­trict named the ele­mentary school after former Hillsdale College Pres­ident Joseph W. Mauck (The Women Com­mis­sioners named Mauck Res­i­dence on campus after his wife, Frances Ball Mauck). Final con­struction costs of the building were $129,036 in 1939. Since then, Greek houses espe­cially had a tra­dition of vol­un­teering at the school.

Soon the college hopes it can bring a new life to the quiet yard and silent halls of Mauck Ele­mentary.

“It’s a beau­tiful building,” Harner said. “It would be helpful to us, because our external presence is only going to grow.” 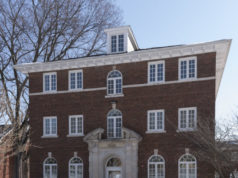 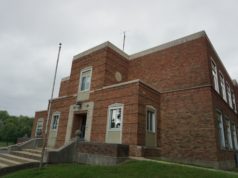