For some, it’s a culture problem. For others, it’s over­pre­scription. But all can agree: Opioid use is a problem in Hillsdale County.

Brock said in his 25 years in the medical field, he has pro­nounced 50 to 100 people dead from opiate-related causes.

“This is some­thing we need to focus on,” Brock said.

Opioid over­doses are the main source of drug-related deaths in the United States. They were related to 42,249 deaths in 2016. Overdose deaths were five times higher in 2016 than in 1999, according to the Centers for Disease Control and Pre­vention. The CDC also lists the increase of opioid-related deaths from 2015 to 2016 as “sta­tis­ti­cally sig­nif­icant.”

The panel focused both on broad issues as well as solu­tions being imple­mented in the com­munity. Walberg said one of the main causes of the opioid crisis is the breakdown of com­mu­nities.

“We in society need to be con­cerned about people caught in this trap,” Walberg said. “We’ve gotten away from the basics of moral society. Some say leave it to the churches. No, we leave it to our­selves.”

Parker added insight from law enforcement, saying that the crime rates in Hillsdale County are “fueled by” theft for money to buy drugs.

“From the sheriff’s office stand­point, we are reactive more than proactive,” Parker said.

Lisznyai explained that some local pro­grams focus on reha­bil­i­tation, rather than just incar­cer­ation. One in par­ticular con­sists of five steps and includes meeting weekly with Lisznyai and fre­quent drug testing. Although the program is new enough that it hasn’t seen any grad­uates yet, the longest-standing case of sobriety is 275 days.

“The drug courts have proven to be one of the best approaches so far,” Walberg said.

The panel also dis­cussed fen­tanyl, an opioid stronger heroin that is often mixed into other drugs.

“Fen­tanyl seems to be the kicker that puts people over the edge,” Parker said. Fen­tanyl also puts officers and their fam­ilies at risk, Parker said. Sus­pected drugs are sent away to a lab, rather than sub­mitted to a street test, so officers are not exposed to the drugs. Granules can sometime travel home with officers, exposing family members to them.

The panel stressed that there is hope, however. The use of treat­ments such as Narcan and Viv­itrol can help break addiction. Both drugs bind to receptors in the brain, blocking the effects of the drugs.

“No euphoria, no effect what­soever,” Brock said. “I think you’re going to see this become a real great drug.”

Former addict Kristi Fraga, 42, attended the talk. Fraga struggled with addiction from 1989 to 2011 and spent six years in jail.

“The culture views addiction as a char­acter defect,” Fraga said. “I feel like it’s a societal defect.”

Fraga added that part of the draw of opioids is the way they numb emo­tional pain, in addition to physical.

“I do think it’s great that we focus on national pol­itics, but we can’t neglect the com­munity around us,” Umana said. “It’s not some­thing that’s going to be solved overnight.”

For Fraga, the solution is helping people find meaning.

“When you don’t have that sense of of self-worth because you’re not doing any­thing mean­ingful, you fill it with a sub­stance,” Fraga said. 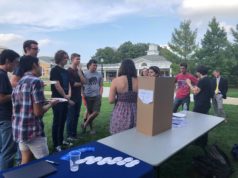 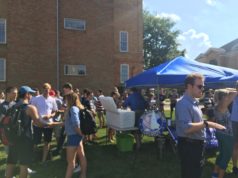