Last week, junior Jordyn Pair wrote a piece, “Stop smoking outside the library,” con­demning smoking outside, between the Grewcock Student Union and Mossey Library, for all the wrong reasons. In doing so she speaks volumes about the way our gen­er­ation responds to dis­comfort.

This summer in New York, I realized that a lot of people smoke. People from all walks and sta­tions of life sit or stand in the crowded streets of Man­hattan as they take in the beauty of the city and breathe out the blue smoke into the air for the rest of us.

I don’t mind the smell of cig­a­rettes because it sure beats other city smells — hot garbage and exhaust. Even in Hillsdale, I’ve never been bothered with the group of people outside the library because they’ve always been there, just like it’s a given that people smoke in Man­hattan.

But Pair and others are uncom­fortable with the status quo. Last week Pair wrote, “It’s time to stop smoking in front of the library.” The problem is that both authors go about it the wrong way by using stu­dents’ comfort as a way to make state­ments about what other stu­dents should do without con­sid­ering the con­se­quences of their argument.

There are probably many of us that feel that smokers shouldn’t be allowed to bother our lungs and pollute our air. Many might be quick to take a moral or health-based high­ground that they think gives them the authority to tell smokers to leave for the sake of their own pref­er­ences.

Those who want the smokers to go away are guilty of a very easy, but harmful way of thinking that our gen­er­ation is eager to embrace: many of us are quick to equate our pref­er­ences with moral claims. Essen­tially, if someone is impeding on our comfort, then they are an offense to our person and are morally wrong.

This mindset is prevalent enough that it deserves its own name, and maybe some­thing like “pref­er­ential realism” could work for our pur­poses here.

Pref­er­ential realism is the notion that if enough people don’t like some­thing, it shouldn’t be allowed to occur or exist simply because it is uncom­fortable. We have such a ridiculous per­ception of our­selves in relation to reality that we think we are entitled to force our pref­er­ences on those around us and on reality.

We have applied pref­er­ential realism to every­thing:  God, Pres­ident Donald Trump, smoking, and speech that we dis­agree with.

There are those of us who con­vince them­selves that there is no God simply because they are uncom­fortable with a God who could send anyone to hell. Because of their own dis­comfort, many others try to cast God in their own image as a God who loves and for­gives everyone instead of sending the unre­pentant to hell. We are tempted to apply our pref­er­ences even to God.

As a more con­crete example, I was at a cre­ative sto­ry­telling event this summer in Brooklyn, and one of the anec­do­talists said that after Trump’s victory, “Denial is sur­vival,” and the room erupted in cheers of agreement.

I was shocked (and ter­rified someone might perhaps learn the truth about my political leanings and the mob that would follow), but I also realized that these poor people deny the latest election results daily because the uncomfort of the current sit­u­ation is too offensive.

There is an increasing number of us who are uncom­fortable with speech that we dis­agree with: Many col­leges are suc­cumbing to the intel­lectual anes­thetic of safe spaces, free speech zones, and trigger warnings on offensive material.

Con­ser­v­ative stu­dents are often harassed by uni­versity and college admin­is­trators for handing out pocket Con­sti­tu­tions or dis­playing pro-life mes­sages in public because many stu­dents feel threatened by the public exchange of ideas.

The great irony with Pair’s piece last week is that it ran under­neath Liam Bredberg’s piece, “Safe spaces hinder college stu­dents.” His com­ments on our gen­er­ation high­light the preva­lence of pref­er­ential realism, espe­cially in America’s col­leges and uni­ver­sities.

“More and more college stu­dents whine about slight dis­com­forts that are thrown their way. This gen­er­ation tends to shy away from things that every adult has had to deal with at some point in their lives. Its weakness is dis­heart­ening,” Bredberg wrote.

Con­demning smokers and calling for safe spaces are two sides of the same coin. In both cases, someone is trying to conform reality to their pref­er­ences.

If we push smokers away from the library because it makes us uncom­fortable, we’re that much closer to pushing away our freedoms and the things that chal­lenge us for the sake of our comfort — a mistake far more dan­gerous than sec­ondhand smoke. 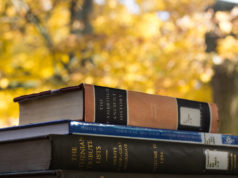 Library served as beacon for studying and snuggling