Last semester before the first day of classes, a bunch of upper­classmen living in Gal­loway Res­i­dence stole a group of freshmen’s pillows and hid them in Olds Res­i­dence. This playful pillow heist sparked a war that has since esca­lated.

This semester, freshmen Caleb Ramette and Philip Andrews, two of the original prankees, planned a reprisal. The two had held a grudge during the winter months. They did their homework and found out the names of their upper­classmen oppressors, and crafted their revenge. Stealing the upperclassmen’s pillows and stowing them in the physics lounge, they then hid five suc­cessive, hand­written clues all over campus.

“We put them as far apart across campus as pos­sible so that they would have to walk,” said Ramette, grinning from ear to ear. “The clues weren’t that dif­ficult, though. We tried to use as few words as pos­sible, sticking more to signs and symbols. We were able to throw the hunt together in a couple of hours.”

The clues led the upper­classmen from Gal­loway to the esca­lator in the Searle Center, then to the sinks in the basement bath­rooms of Howard Music Hall, then to the banner in the psy­chology suite of Kendal Hall, then to the basement of Michael Alex Mossey Library where the final clue was wedged between volumes one and two of “Manners and Customs of the Ancient Irish.” When they finally found their pillows in the physics lounge, the clues had led them just over a mile and a half around campus.

It took them two days. They got hung up on the second clue for so long that Ramette had to plant another clue that encouraged them to look harder. But they even­tually found them, and they only went one night without pillows.

Some of the upper­classmen were angry (under­standably), but Jared Ellison, a sophomore history major, enjoyed the prank immensely.

“I thought it was hilarious,” he said. “Pranks like these are very important for building com­munity in a dorm. Somehow by pushing against each other we end up getting closer. Some people were mad when they found that their pillow had been stolen, but when they found out who did it, everybody softened. In the end, most of us con­grat­u­lated Philip and Caleb on setting up such a good hunt.”

Ellison enjoyed the pillow hunt so much that he decided to pay the pranksters back in a similar fashion. Focusing just on Ramette and Andrews, Ellison stole their pillows and their tooth­brushes and set up a hunt of 20 suc­cessive clues that took the pair to nearly every building on campus. This time, the treasure hunt involved more than simple clues.

Ellison explains one of his favorite puzzles: “I took a book from the free-book shelf in the library and hol­lowed out the inside where I put a pen and a coded message. When they deci­phered the code, the message told them that the next clue was in the dust jacket of the book they were holding.”

It took Ramette and Andrews four days to finish the hunt.

Ellison esti­mates that they had to walk about five miles to find their stuff, which he had stashed in McIntyre, another women’s dor­mitory.

Ramette had stashed a couple extra pillows in his closet in case of such reprisals, so he and Philip didn’t have to go without pillows. In fact, they could have just quit, but they com­pleted the hunt anyways.

“They were good sports,” Ellison said.

When asked if he thought that Caleb and Philip were going to get him back, Jared smiled at the prospect.

“They haven’t hit back yet, but I hope they do,” Ellison said. “They should choose their victims care­fully so that no one gets super frus­trated, but I would love to get my pillow stolen again.” 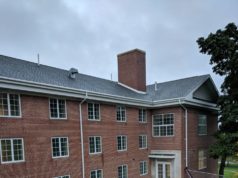