Although Fri­day’s warm spell had already melted some of the ice layered on top of the lakes in Osseo, Michigan, it didn’t deter the ice fishers from par­tic­i­pating in the 58th Tip-Up Fes­tival this weekend.

The Tip-Up Fes­tival is the Hillsdale Con­ser­vation Club’s biggest fundraiser of the year, with money going toward both schol­ar­ships and club activ­ities. It also brings Hillsdale county dwellers together.

“We cater to the kids around here,” Kirk Culbert, “Mr. Mayor” of the fes­tival, said.

Scott Phillips ’77, a con­ser­vation club member who does realty for his day job, also jumped in.

“The adults have fun, but it’s all for the kids,” Phillips said.

Culbert added, for the record: “There’s lots of super­vision.”

For Phillips, it’s espe­cially important to get kids outside today. He spec­u­lated that kids might need replacement thumbs in the future because of all the gaming.

“I think it changes their lives. It’s about seeing nature, not about hunting and killing,” Phillips said. “Hunting is con­ser­vation. It’s part of keeping every­thing in line.”

The weekend’s two most popular events were the steak dinner, during which vol­un­teers served up about 200 dinners, and the prize-cash raffle, which always packs attendees in shoulder-to-shoulder.

While fishing is the main draw, the fes­tival has grown to include deer, coyote (pro­nounced kai-ote), and squirrel hunting. Coyotes are espe­cially prob­lematic, according to Culbert, as their hunger for pheasants has almost killed the pheasant pop­u­lation.

“We’re overrun with coyotes, so anyone who brings them in, thank you,” Phillips said. “They’ve got no predators but us, they pop­ulate almost like rabbits.”

Culbert regaled me with a coyote story. A hunter he knew was up in a tree, hunting. A pack of coyotes stopped below the tree and he shot at them until he ran out of bullets. Some friends, having noticed the hunter’s absence, came with their pickup and chased the coyotes away.

Phillips said there are a couple hundred members of the con­ser­vation club, which has an affiliate rifle club.

Most of what the con­ser­vation club does is for the kids, Culbert said, from 4‑H to prac­ti­cally all shooting sports: .22, archery, BB, pellet, trap, and muz­zle­loader.

Over the past few years, the club has even sent 10 kids to national shooting com­pe­ti­tions for archery, .22, pellet, and muz­zle­loader, said Bonnie Shaffer, a member who orga­nizes the shooting sports.

Shaffer said that starting Feb­ruary, the con­ser­vation club will have beginning bow classes on Mondays at 6 p.m. that are open to the public, for children 5‑years-old and up.

Overall, Shaffer said it’s been more than won­derful to work with the club and the kids.

The cash and prize raffle, as well as most of the hunting gear the con­ser­vation club allows members and children to use, are acquired through donation — which Phillips said involves a little chasing down.

“We get a lot of good feedback,” Culbert said. “A lot of dona­tions come from local mer­chants, and we get deals.”

The fes­tival doesn’t leave out non-hunters and non-fishers, however: On Friday, 60 people filled the hall for a giant Euchre tour­nament.

Hunting and fishing fall down the family, Culbert explained, when Phillips jumped in, adding that kids some­times get their dads inter­ested, too.

Phillips recalled how his dad, J. Donald Phillips, Hillsdale College pres­ident from 1952 – 1971, would take him fishing when he was younger. The elder Phillips also took a November vacation for open-season deer hunting, bringing his college work up north with him.

66-year-old Ralph Slade ambled up, Bud Light in hand, ready to tell stories. In one, he was in a tree hunting, wearing camo. He was still for so long a squirrel even­tually came up to his pant leg and climbed up his body as if he were part of the tree. The Hillsdale native esti­mates he’s been coming to the tip-up fes­tival since the late 50s, early 60s, way back when it was held on the beach at Baw Beese Lake. He said some things have gotten better and better over the years.

Still, some aspects stay the same. Slade said there are a lot of fes­tival reg­ulars who he only sees here.

Outside, Tony Bor­roughs, from Morenci, Michigan, is carving animals out of stumps with a chainsaw. It’s his second year exhibiting the wood carving process in real-time at the fes­tival, but he’s been carving for about 10 years now. A chainsaw, unex­pectedly, is nothing like the clay sculpting and drawing he did before that.

“It takes some getting used to,” he said. “You have to respect it like it might bite you. Be aware. It’s a lot faster than any­thing you’ll ever use.”

He called it an alli­gator.

At the moment, he was exam­ining a log with branches coming out every which way, fig­uring out how he would carve a perched owl into it.

Lansing local Nick Green is over by the painted wooden fish punc­tured with hooks from which fish dangle, inspecting. He’s vis­iting his in-laws, and they were fishing on Baw Beese with no luck. It’s his first time coming down for the fes­tival.

Com­pared with the tip-up fes­tival at Houghton Lake, a big event that draws a larger crowd, Green described the Hillsdale Tip-Up Fes­tival as pretty local, with more friendly com­pe­tition.

“It’s fun to see the com­munity get involved in some­thing,” Green said. “It’s family ori­ented. It gives a sense of com­munity, and it’s a good way to get to know people.”

Back inside, it’s a little after lunchtime but members in spe­cialized T‑shirts are still deliv­ering pulled pork, hot dogs, and potato wedges from the kitchen.

Phillips describes the fes­tival people as a “fun crew.”

“Nobody has an agenda,” he said. “They’re fishing, drinking a beer, or two…”

Lottie LoPresto, the fes­tival orga­nizer, walks by. Phillips flags her down, heralding her as the “guts and glue” of the oper­ation.

LoPresto has been in charge for more than 10 years now, keeping track by the 50th anniversary, when, she remembers, they went all out. The weekend of the event, she stays late into the night.

“We have a good crew that is the heart of this event,” LoPresto said. “You can’t do it as two people. This event is run on 20-plus members.”

She said given last year’s freezing rain and ice storm, she can’t com­plain about this year’s warm weather. The only event the melting ice cancels is the kids’ ice fishing.

She’s proud that the event is self-funded.

“It’s amazing,” she said. “You think of our com­munity as poor, but we still have its support.”

With the euchre, cash and prize raffle, fishing, hunting, kids’ activ­ities, and wood carving, there is still one thing that LoPresto thinks the fes­tival is missing.

“I would love to have an ice sculptor.” 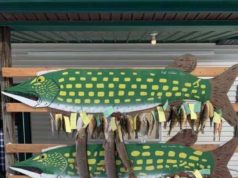 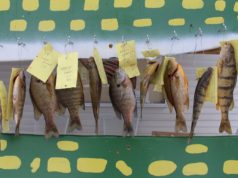