When flutist Clara Fishlock audi­tioned for the 2018 Concerto/Aria Com­pe­tition, she chan­neled the sound of bow hairs grating on strings rather than the hushed whispers floating from a flute.

The junior history and French major drew her musical inspi­ration from the violin rather than the flute to pre­serve the heart of the piece, which she will perform on March 1 with the Hillsdale College Sym­phony Orchestra after earning a winning spot in the com­pe­tition. Aram Khacha­turian wrote his “Violin Con­certo in D minor” for the violin, as the song’s title indi­cates. When Fishlock trans­poses the piece to the flute, she strives to keep the musical quality of a vio­linist.

“If I hadn’t known this piece was a violin con­certo, I would have played it very dif­fer­ently,” Fishlock said. “It brings out a dif­ferent aspect of the flute. Dif­ferent emo­tions come out in this piece, maybe, than in the majority of flute con­certos.”

Fishlock said she treats notes of shorter lengths, for example, with special care. On the flute, peels of eighth notes and six­teenth notes take on a del­icate tone, but a vio­linist per­forming this piece would grind her bow across the strings to evoke a more pow­erful sound.

“I did a lot of lis­tening to violin, and I thought a lot about how to best mimic those sounds on the flute,” Fishlock said.

When Fishlock began prac­ticing the con­certo, her ears were already attune to the sounds and tech­niques of the violin: Her sister, freshman Eleanor Fishlock, has played the violin since she was a little girl. A member of the orchestra, Eleanor will sit among the string section in March and accompany her older sister as she per­forms her solo.

The sisters are not the only members of the Fishlock family who possess musical talent. David Fishlock, their father, is the prin­cipal per­cus­sionist in the Cincinnati Sym­phony Orchestra.

“Clara was a great flutist when she arrived at Hillsdale, with excellent tech­nical faculty and a beau­tiful lyrical style,” Wagner said.

Orchestra Director James Holleman echoed Wagner’s obser­vation and said Fishlock is a leader of the orchestra, always mod­eling pre­paredness and atten­tiveness in rehearsals. Though he did not par­tic­ipate with the con­certo competition’s judges in picking a winner, Holleman said Fishlock’s per­for­mance impressed him.

“Clara’s con­certo is tech­ni­cally demanding, and she showed her advanced faculty on the instrument,” Holleman said. “She showed she would be able to be heard playing with the orchestral accom­pa­niment on the concert.”

Wagner said the concerto’s dif­fi­culty lies in the fact that it was written for another instrument. Pri­marily, the piece presents no oppor­tu­nities for a flutist to breathe, since it was orig­i­nally com­posed for a string player who can breathe at any point in the music.

“There are a lot of really long phrases in the piece,” Wagner said. “We work to shape the phrases so that we can breathe in a musical way, where a violin player wouldn’t nor­mally pause.”

Fishlock added that, dis­re­garding its demanding pas­sages, the piece exhausts her just in its length.

“I need to con­tin­ually build my stamina to be able to play for 16 minutes,” she said. “During the com­pe­tition I felt myself really losing energy while I was playing.”

Despite the demands of the music, Fishlock said she’s happy with the com­pet­itive atmos­phere at the music department.

“Our envi­ronment is a great one to compete in. Con­grat­u­la­tions to the music department for making this a healthy envi­ronment,” Fishlock said. “A lot of times these things do not foster com­munity, and I think it does here. I haven’t seen that in music com­pe­tition scenes else­where.” 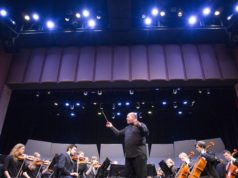 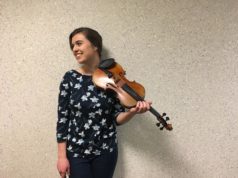 Keely Rendle: A violin for a voice