“I had heard of the play before being a part of the pro­duction, when I had acci­den­tally rented the movie during middle school, one time,” Sauer said. “I knew it was a comedy, and knew people in town would appre­ciate it.”

The play opens with nar­rator Albert Soady, played by Timothy Brayman, asking the audience whether they have ever visited the Upper Peninsula, or even know what the true UP is. (Con­trary to public opinion, Mackinac Island, according to the Soady-char­acter, does not count.)

The play then explores the hunting ven­tures and special “deer camp,” of the Soady father and brothers, and their friend Jimmer Nega­manee. In an attempt to end Reuben Soady’s hunting curse as a “buckless yooper,” the crew embarks on a series of strange events with a glo­rious light, Native American mys­ticism, and even one another.

The audience in the front row were told by Director Trinity Bird, they were in the “splash zone,” as several scenes required the tossing of bev­erages as props, to portray Soady Sweet Sap Whiskey, “moose tes­ticle” potion, and por­cupine pee.

One scene in par­ticular encap­su­lates the UP-redneck-atmos­phere attempted in the play, as Reuben Soady says in defense of his hunting skills, “No flap­jacks, no mac­aroni and cheese, and no spam.”

Sauer had been in seven shows during high school, as well as one show per semester while attending Hillsdale College. This training and back­ground was evident in Sauer’s stage presence and refinement.

“This was one of the smaller casts I’ve been a part of,” Sauer said. “Since this was my first show in a while, it was helpful to have a smaller cast where we could grow together.”

“It was great having such a small cast because the small group allowed me to develop rela­tion­ships with fellow actors,” Johnson said. “I really got to know each person.”

The cast — made up of only six actors — allowed the audience to quickly under­stand the per­son­al­ities of each char­acter in the play.

“We make comedy believable, but let the craziness unfold,” Sauer said. “I like how aloof Ranger Tom is. He’s a lovable char­acter, although he is com­pletely unaware of his sur­roundings, and can be easily taken advantage of.”

Freshman Johannes Olson, who was raised in northern Michigan, rec­og­nized these stereo­types, and found them to be accurate of actual UP natives.

“You have to be from Michigan to under­stand some jokes. You would not think the stereo­types in the play are accurate, but they are. I’m from northern Michigan, and know some people just like that,” says Olson. “Deer Camp is basi­cally guy-time, booze, hunting, and no girls allowed.”

The play does not limit itself to locals of the UP, though. Stu­dents from other parts of the country also appre­ciated the Michigan humor.

Fellow freshman Dan Grif­ferty says, “I’m from New York, so this was my ‘crash course’ to under­standing UP culture, but I thought it was pretty funny. It also doesn’t hurt that Jeff Daniels wrote it.”

The play does in fact contain adult lan­guage and numerous innu­endos, which some fam­ilies may find inap­pro­priate for younger children.

But “Escanaba in Da Moon­light” pro­vides Michi­ganders with a relatable account of UP culture and leisure, a small cast with trained actors, and humor that will leave the audience belly-laughing.

The play con­cludes with a recurring image throughout the play: Albert Soady, leaning back in his recliner, a lift of his flask, a drink, and an exag­gerated wipe of the mouth.

“‘Escanaba in Da Moon­light’ is very fun and a must-see,” Sauer said. “I think it is important that the com­munity is shown some support from the college.” 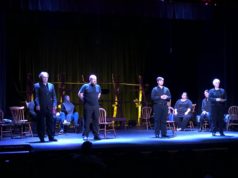 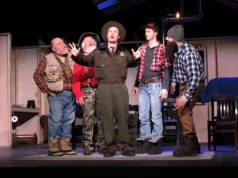 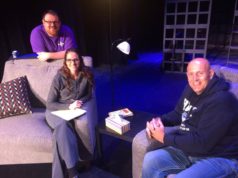