Some­times, when Hillsdale County sculptor Heather Tritchka ’98 is working on a statue, the facial emo­tions on the sculpture seem to reflect those of of the sculptor, her husband Greg Stuchell said.

“If she’s was really joyful that day, the statue’s face would look more like it’s smiling,” Stuchell said. “If she was in a bad mood while sculpting, at the end of the day, you can almost see more of a frown on its face.”

From the statue of former British prime min­ister Winston Churchill in the Grewcock Student Union to the statue of Potawatomi princess Winona in Mrs. Stock’s Park, Tritchka has crafted many statues since she first took a sculpting class as an under­graduate student.

Now, her latest project has moved from humans to animals as she begins sculpting a mother black bear and her two cubs for an installment along Baw Beese Trail. She said the most lengthy and dif­ficult part of the sculpting process is toward the beginning, when she’s con­structing the armature, or interior framework, of the statue. Unlike pre­vious statues, which had a more flexible wire frame, the bears will have a plaster frame under the clay exterior that will be sturdier during the process of casting the statue in bronze.

“It’s a little bit dif­ficult as an artist because I’m used to having an armature that moves, so when I look at it and say, ‘I wish her head was just a little more to the side,’ I can grab it and move the whole thing,” Tritchka said. “But when you have a hard, plaster center, there’s not a lot of turning. I’d have to cut and replaster. It’s ok because bears don’t move grace­fully anyway, so it’s not too bad. But that might be a chal­lenge if I do another human figure.”

She said con­structing the framework, espe­cially a less flexible frame, is one of the most time-con­suming aspects of the sculpting process.The armature hardly resembles the fin­ished product, but Tritchka has already put in hun­dreds of hours of research to determine how the bears can be arranged in real­istic and artistic poses.

“Armature is one of the most dif­ficult parts because I feel like I have to get the motion of the piece and the spirit of the piece done with armature,” Tritchka said. “The detail stuff on top is kind of like putting the dec­o­ra­tions on the cake.”

With some of her human statues, such as the Winona statue, Tritchka rolled clay onto the armature, then smoothed it and shaped the surface details. For the bears, however, she said she would like to try a dif­ferent approach.

“I’m going to try some­thing a little dif­ferent with melting the clay into a putty-like texture and then putting it on with a putty knife to create a rougher texture,” Trichka said. “I’m still trying to figure out how I want to indicate fur, and I don’t want to do some­thing super fin­ished. I want to have a rough look to it because it’s going to be on a trail outside in a natural setting, and I want it to have a rough texture, but what that looks like exactly, I’m not sure yet.”

Tritchka said the cre­ative focus of her animal-based statues has dif­fered from her human statues, since bears have fewer spe­cific char­ac­ter­istics to con­sider during the design process. Instead of focusing on his­torical details of a human subject, Tritchka said she has con­cen­trated her efforts on making the statues inter­active.

“With Winona, it was more about getting the figure accurate, making sure she looks like someone who could be half-Potawatomi and half-French, and making sure I have the his­torical details correct, and then the energy that I would’ve put into that, with the bears I’m putting that into making sure that people can interact with them,” Tritchka said.

The mother bear, up on her hind legs, will stand behind her two cubs playing with a berry branch. Tritchka said the mother’s paws will be out far enough that someone could stand next to her or in front of her, and small children will be able to crawl between the cubs or sit on one of the cubs’ laps.

Once the clay statues of the momma bear and her cubs are com­pleted, the statues will be cut into smaller por­tions and trans­ported to Studio Foundry in Cleveland, Ohio.

There, the clay statues will be used to make rubber forms of the clay exterior. The rubber forms will be filled will a thin layer of wax. Foundry workers will then dip the wax pieces — hollow replicas of the clay bears’ heads, torsos, and limbs — into porcelain slurry.

The porcelain, once hardened around the wax, serves as a mold for the final bronze statue. The molten bronze is then poured into the porcelain, filling the space as the wax melts out of the mold.

“It’s a similar process that the Romans used, and probably the early Greeks, where they would cast the statues in sec­tions,” John Ranally, an owner at Studio Foundry, said.

Stuchell said Tritchka’s work, both in the clay models and the final bronze statues, cap­tures the emo­tions and facial expres­sions of her sub­jects in a pow­erful way.

“She really has an eye for detail,” Stuchell said. “I never get tired of looking at her art.” 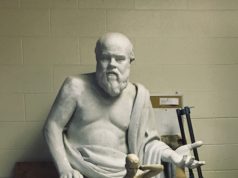 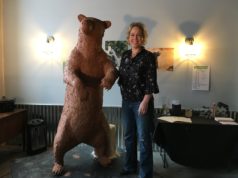 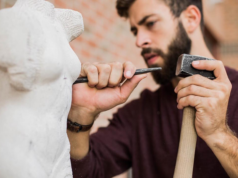