A 66 million-year-old tricer­atops skeleton joined the col­lection of the Daniel M. Fisk Museum of Natural History in the Stro­sacker Science Center today in an unveiling cer­emony at noon.

The skeleton, named Donna, is more than 60 percent com­plete, and joins “Linda” the edmon­tosaurus in the museum. Pro­fessor of Biology Anthony Swinehart, curator of the Fisk Museum, said tricer­atops bones are rel­a­tively common in dinosaur ter­ritory, but the bone con­fig­u­ration of this par­ticular skeleton is rare, and there are less than 10 tricer­atops skeletons like it. The addition of the tricer­atops makes Hillsdale one of two or three places in the entire state of Michigan where real-bone dinosaurs are on display, Swinehart said.

“Most col­le­giate insti­tu­tions have gotten rid of their museum col­lec­tions, while Hillsdale College has been rebuilding its museum and asso­ciated col­lec­tions,” Swinehart said in an email. “That seems fitting to me. While many others naively do away with natural history col­lec­tions as ves­tiges of an ‘anti­quated dis­ci­pline,’ Hillsdale College — being the standard-bearer for tra­di­tional edu­cation — con­tinues to honor this tra­di­tional science and rec­og­nizes that it still has great value, both intrin­si­cally and in terms of valuable appli­ca­tions to problem solving.”

The skeleton was dis­covered on private property in North Dakota in 2015 by Jim Braswell, an amateur fossil col­lector. Swinehart and three Hillsdale stu­dents, Lily Carville ’17, Matthew Hoenig ’17, and Randall Rush ’17 helped with the exca­vation process. The skeleton was donated by Caitlin and Tyler Horning ’06. Although the exact mon­etary value of the skeleton was not made public, Swinehart said the skeleton is incredibly valuable.

Asso­ciate Pro­fessor of Anthro­pology Steve Nicklas at the Uni­versity of North Georgia, a col­league of Swinehart’s, and his stu­dents also helped to excavate the skeleton and prepare it for display.

“He was the one that cleaned and glued and sta­bi­lized the bones and put it in the mount,” Swinehart said.

Carville credits Swinehart for allowing stu­dents to play a sig­nif­icant role in the exca­vation of the skeleton.

“A big shoutout goes to Dr. Swinehart for bringing stu­dents to help him,” Carville said. “He could’ve gone on his own or just brought some of his friends and col­leagues, but instead he brought Hillsdale stu­dents and made it an incredible learning oppor­tunity.”

Carville, who wrote her senior biology thesis on the envi­ron­mental con­di­tions near the skeleton, said half the skeleton was mostly intact, while the other half had eroded away.

“A lot of the work was just fig­uring out where the bones were,” Carville said. “I kind of expected it to be like ‘Jurassic Park,’ where you are brushing off the skeleton with a tooth­brush, but a lot of it was just going at a hill with pickaxes.”

Carville and Swinehart said the tricer­atops was most likely at the edge of a river when it died and was covered by a flash flood event.

A variety of con­di­tions must exist for a fossil to form, making their occurence rel­a­tively rare, Tyler Horning said.

“You think about all the factors that go into having such a well-pre­served skeleton,” Horning said. “It’s been in the ground like that for 66 million years, even with all the changes in envi­ronment and stone piling on top of it. That’s pretty amazing.”

The Tricer­atops hor­ridus were plant-eating, horned dinosaurs alive during the last two million years of the Mesozoic Era, called the “Age of Rep­tiles,” and died off when the impact from a large meteor ended the reign of the dinosaurs, Swinehart said. They lived in what is now Col­orado, Montana,  North Dakota, South Dakota, Wyoming, and Alberta, Canada.

Tricer­atops reached a maximum length of about 29 feet and weighed up to 12 tons.

Braswell gave the Tricer­atops hor­ridus dis­played in the Fisk Museum the name Donna in honor of his wife. The skeleton’s skull mea­sures 7 feet across and has a hole in it from injuries during its lifetime, Swinehart said.

“The frill that they have on the back of the skull has a hole in it from fighting with another tricer­atops,” Swinehart said. “Probably it was two males fighting, but we don’t know if it was a male or female dinosaur.”

The fossil also con­tains an artic­u­lated arm, meaning that all the bones in one of the forearms were pre­served — a rare find that will help pale­on­tol­o­gists determine the tricer­atops’ posture and how it used its limbs to walk, Swinehart said.

“We can find a random toe bone and say it’s a toe bone, but some­times we aren’t able to dis­tin­guish which finger it came from or which exact position it is,” Swinehart said. “If we have that and we know exactly which finger it came from and so on, we can look at muscle attachment sites, and that can help us determine exactly how they walked. So it’s a really cool detective story, and there’s only been one paper ever pub­lished on it from one specimen that’s at the Black Hills Institute Museum in South Dakota.”

Carville said the skeleton could also be used to help determine the number of dif­ferent species of tricer­atops that existed. For­merly, researchers believed there were eight species, but it’s pos­sible that some of these dis­tinc­tions were related to whether the tricer­atops were juvenile or mature when they died, Carville said.

The skeleton is dis­played as a two-dimen­sional relief mount in the museum, with the skeleton par­tially embedded in an arti­ficial matrix similar to the rocks where the tricer­atops was orig­i­nally dis­covered. The missing bones from the skeleton were filled in using casts from other tricer­atops spec­imens, Swinehart said.

“We now have two mostly real-bone dinosaurs in a 40-foot long room,” Swinehart said. “There are some states that don’t have a dinosaur in the whole state. We can probably right­fully say we have the smallest dinosaur museum in the world.”

Small pieces of the tricer­atops bone not needed for the display will be available for sale for $2 fol­lowing the unveiling of the skeleton, Swinehart said. All pro­ceeds from the sales will go toward the museum.

“My col­league ran into one of the senior pale­on­tol­o­gists at the Smith­sonian while we were out there on the dig and told him about the artic­u­lated limb,” Swinehart said. “The guy from the Smith­sonian said, ‘We don’t have any­thing like that.’ So this is really cool.” 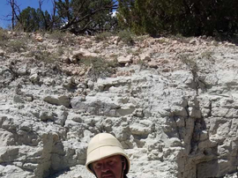 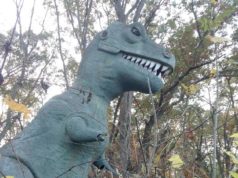 Pulp Michigan: A land before time in the Irish Hills 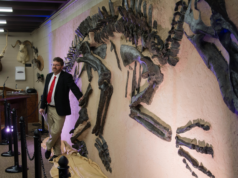