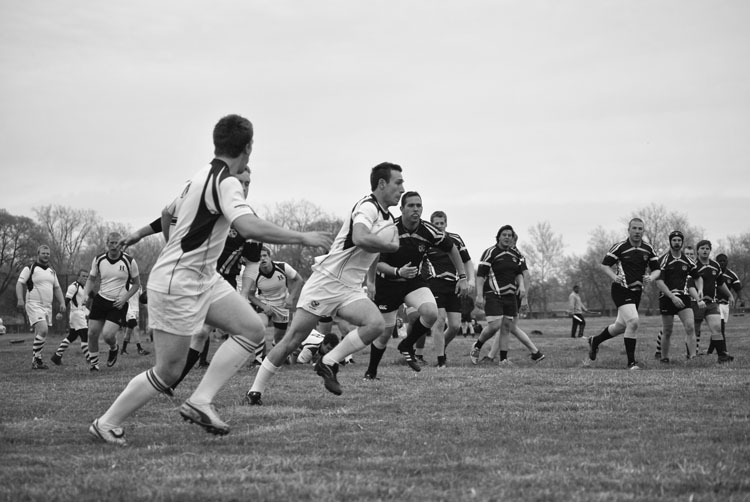 After a two-year hiatus, the “gentlemen’s sport” plans to take up res­i­dence on campus this spring.

After grad­u­ating a strong group of seniors in 2016, there hasn’t been enough new interest to field a team. But junior Dustin Bowers and his team­mates juniors Chris Huffman and Kolbe Conger are working to change that. Posters around campus — “Are you a man? Prove it.” — are evi­dence of a year-long effort to encourage out recruits for what Huffman calls an aggressive, physical, and rewarding sport.

“We’re trying to bring the spirit of rugby to campus,” said Conger, a junior who has been playing rugby since he was ten. “Lots of people think contact sports end after high school, but they don’t have to. Rugby is a great contact sport to play in college.”

Bowers, Conger, and Huffman were all members of the last iter­ation of the rugby club team, and they hope to bring the team back to official com­pe­ti­tions this spring. No prior expe­rience is required for the team, which will host prac­tices three times per week.

For the spring season, the team plays a faster version of rugby with seven players on the field instead of fifteen. Since there are no “fronts,” the rugby equiv­alent of football’s linemen, sevens is more about speed than fif­teens, the version they play in the fall.

Huffman said he has 12 men cur­rently inter­ested in the team, and would like to field a team of 15 to 20 players for the first tour­nament of the season. Though they are still final­izing the schedule, Huffman said the team has invites from tour­na­ments at Kala­mazoo, Western Michigan, and Central Michigan.

To prepare for the April tour­nament, Bowers and Huffman have begun hosting prac­tices on the new fields at Hayden Park. Their practice regimen will also include team lifts and workouts for con­di­tioning and team-building to get new and old team members phys­i­cally pre­pared.

“You have to get used to getting hit,” Huffman said.

But even among the vet­erans, there are dif­ferent levels of expe­rience with the sport. Bowers, a football player in high school, began playing rugby the spring of his senior year, even though it wasn’t all that popular in his hometown of Livonia, Michigan. He was sur­prised to see that Hillsdale had a club, and he joined right away.

“I just fell in love with it,” Bowers said. “t’s such a fast sport, with con­stant movement and some­thing going on at every moment.”

“I always wanted to play rugby in high school, and started playing pickup games my senior year after baseball season,” Huffman said. “It’s a simple game. You just learn the fun­da­mentals and run with it.”

Conger said rugby offers three main ben­efits: ath­letics, cama­raderie, and the chance to do some­thing worth­while by reviving a sport that’s not well known in the area.

“Rugby is a unique, aggressive sport, and you get in ter­rific shape. It’s also a con­fi­dence booster, espe­cially for people who have never played it before, because you get to see what you are capable of,” Huffman said. “Because of the way rugby is played, you also develop strong bonds with your team­mates, which you don’t get in all other sports.”