This past summer, senior bio­chem­istry major Luke Miller researched an anti-inflam­matory drug that could pos­sibly be used to treat pan­creatic cancer — an effort he was inspired to join because of his little brother’s struggle with cancer.

“This is actually like boots-on-the-ground research that is hope­fully going to make a dif­ference,” Miller said. “Cancer is so diverse and so complex that really any strides we can make in either under­standing the mech­anism or finding a com­pound that really helps is incredibly important.”

Miller worked under the super­vision of Karen Liby ’94, who is now an asso­ciate pro­fessor in the department of phar­ma­cology and tox­i­cology at Michigan State Uni­versity.

Liby said her lab focuses on studying drugs for the treatment and pre­vention of cancer, specif­i­cally those related to inflam­mation.

Although pan­creatic cancer is a rel­a­tively simple type of cancer, it’s also one of the dead­liest types, Miller said.

Depending on what stage at which the cancer is diag­nosed, sur­vival rates can range from 7 ‑10 percent, according to the Hir­shberg Foun­dation for Pan­creatic Cancer Research. The sur­vival rates are lowest, if the cancer has metas­ta­sized, or spread to dif­ferent parts of the body.

According to the American Cancer Society, tens of thou­sands of adults in the United States are diag­nosed with and die from pan­creatic cancer every year.

“We’re trying to see if we can find a way to treat pan­cre­atitis in a manner that pre­vents pan­creatic cancer devel­opment or at least lessens the severity of the cancer when it develops,” Miller said.

Miller worked with a spe­cific anti-inflam­matory drug to see if it would be effective in treating pan­cre­atitis and, by extension, pan­creatic cancer.

This drug was pre­vi­ously tested to see if it would have any effect on Parkinson’s disease, but Miller said it didn’t work for that purpose.

“It’s an example of a drug-repur­posing project,” Liby said of Miller’s research.

To test whether the drug would stop the body’s inflam­matory response and cancer cell pro­duction, Miller used a live mouse model to see how mice responded to induced pan­creatic cancer and inflam­mation and how the drug of interest could help alle­viate the symptoms.

Miller had pre­vi­ously worked in a plant phys­i­ology lab for two summers but decided to apply for the cancer research oppor­tunity for this past summer because of his little brother’s leukemia diag­nosis.

“I really wanted to have an oppor­tunity to work in a cancer lab­o­ratory and con­tribute, because it’s since then become a huge part of my life and the life of my family,” Miller said. “The thing about cancer is that as a family member, you feel so helpless when someone you know or someone you’re related to has cancer. You feel so helpless because you can’t do any­thing. So just finding a way to do some­thing was really great.”

While he was not working on curing leukemia specif­i­cally, Miller said he still wanted to make a dif­ference through working on other types of cancer — an oppor­tunity made pos­sible through the laboratory’s work ethic.

“They’re really ded­i­cated to what they do and to helping people, trying to focus on getting new drugs, better drugs, on the market,” Miller said. “And they want to do it for the right reasons. It’s not really for the recog­nition. It really is to help people and make lives better. You can see that when they talk about their work.”

Liby’s lab has worked with several other drugs that have potential for pre­venting and treating cancer, including a class of drugs called rex­i­noids.

Miller said working in a phar­ma­cology setting has influ­enced his goals for after grad­u­ation. He said he is def­i­nitely con­sid­ering doing some­thing related to cancer biology and probably some­thing even more fun­da­men­tally related to cell biology.

“Luke did a great job,” Liby said. “He’s exactly the type to do well in graduate school.”

The official results of Miller’s research from the summer won’t be pub­lished for a while yet, Liby said.

Nev­er­theless, Miller said he hopes research on this drug can con­tinue. He said he was heartened by the work he saw being done in Liby’s lab.

“There are people out there who really do have a deep-seated desire to help, to heal people suf­fering from this disease,” Miller said. “And at least I hope that can be a com­forting thought.” 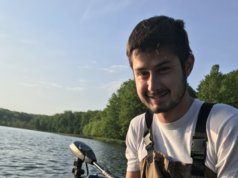