Parkinson’s disease, a neu­rode­gen­er­ative disease that results from the death of dopamine-releasing neurons in the brain, affects more than 10 million people worldwide, according to the Parkinson’s Foun­dation. Although the disease includes a variety of symptoms, patients often expe­rience shaking or tremors, slowness of movement, or trouble bal­ancing.

For the past two summers, senior Taylor Zimmer worked as a research intern at Van Andel Research Institute, working with a spe­cific protein related to Parkinson’s disease to help develop a diag­nostic test and model of the disease.

Although approx­i­mately 60,000 new cases are found each year in the U.S. alone, according to the Parkinson’s Foun­dation, there is no defin­itive diag­nostic tool for Parkinson’s disease, and the exact mech­anism behind cell death remains unknown.

“Cur­rently, if you were to go to the doctor, there are no tests they can give you to diagnose the disease” said Katelyn Becker, a senior research tech­nician in the lab where Zimmer worked. “They will look at your symptoms and take a good guess, and they’re right about 70 – 80 percent of the time. This is because the symptoms are over­lapping between dif­ferent neu­rode­gen­er­ative dis­eases, and unfor­tu­nately by the time the symptoms are noticeable, the damage to the neurons is already done.”

Although the symptoms are similar between dif­ferent neu­rode­gen­er­ative dis­eases such as Alzheimer’s disease and Parkinson’s disease, the pro­gression and cause of the dis­eases in the brain are very dif­ferent. This can make drug trials dif­ficult, Becker said.

“A drug might help with Parkinson’s disease, but when you have patients with other dis­eases in the study, you wouldn’t be able to see the effect, so that limits our analysis of what’s working,” Becker said.

In turn, dis­tin­guishing effective drugs for Parkinson’s disease could help researchers determine the mech­anism by which the disease causes neuron death in the brain.

Zimmer’s work focused on a single protein, alpha synu­clein, a protein that is thought to be involved in vesicle transport at the juncture between two neurons. The mis­folded alpha-synu­clein protein, however, forms fibrils that clump together and are thought to cause cell death.

Exam­ining the effects of various muta­tions on this seeding ability could prove useful to deter­mining whether alpha synu­clein fibrils can be used as a bio­marker of Parkinson’s disease.

“For example, if a bio­logical sample from a PD patient con­tained small amounts of alpha synu­clein fibrils, you could take that sample and test the seeding ability,” Zimmer said. “If it did seed, that would say that they had PD. If it didn’t grow at all or had a long lag time for growing fibers, then they don’t have PD.”

Zimmer said of the variants she tested, she was able to identify one variant that showed promise for use as

a diag­nostic tool. She also helped improve a pro­tocol for quickly weeding out variants that were not can­di­dates for use in this test.

“That’s kind of a never-ending project because there are thou­sands and thou­sands of variants,” Zimmer said. “At the very end of the summer, I got one out of the eight that I tested that seemed like a really good can­didate.”

This past summer, Zimmer con­tinued her work with the alpha-synu­clein protein, this time devel­oping a way

to flu­o­res­cently label the protein so it could be studied and observed in cells. She said it was the first time that this labeled alpha-synu­clein protein was made into fibrils using ultra­sound, and she had to determine whether this method of tagging the protein would interfere with its ability to form fibrils. She then examined the seeding capa­bility of the tagged protein when added to cells.

“First, I had to go through the process and see how well the labeled alpha synu­clein grows into fibrils in vitro,” Zimmer said. “You have to char­ac­terize its growth before you can test it in other models.”

Becker said the Ma lab­o­ratory, which focuses on prion mech­a­nisms in neu­rode­gen­er­ative dis­eases, will con­tinue working to create a model of the disease and potential diag­nostic tools.

“We’re trying to work at it from all angles — there isn’t a good Parkinson’s disease model yet, so that’s really lim­iting when you’re trying to figure out the cause of a disease,” Becker said. “Unfor­tu­nately that just one of the huge chal­lenges with the research we’re doing right now.” 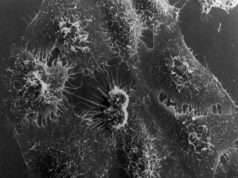