Hillsdale College admin­is­trators have called the new in-house Phonathon method a success. Nov. 15 marked the con­clusion of the first college phonathon run without the assis­tance of an outside fundraising company. Director of the contact center, John Papciak, said the recent phonathon sig­nif­i­cantly out­raised pre­vious phonathons.

“We are around $80,000 better off than we were last year at this time across the board for all three phonathons,” he said.

The exact numbers per­taining to amounts raised will be released upon the end of the Hillsdale College fiscal year next summer.

“We have esti­mates but we don’t want to be spe­cific just yet,” Papciak said. “The reason we hold off is because many people pay via pledges so we want to have the money in hand before we count it. Oftentime, it’s more than we antic­i­pated.”

Fol­lowing the college’s opening of the contact center in the fall of 2016, the college has worked towards running the Phonathon without the assis­tance of an outside company. The college reduced costs by using their own software, hardware, and per­sonnel to run the Phonathon.

In addition to reducing costs, running the Phonathon in-house allowed the college to sim­plify the training process by using stu­dents already working in the contact center.

“We had about 35 to 40 of our student workers work the phonathon,” Assistant Director of the Contact Center Mary Mar­garet Spiteri said. “It was easy to incor­porate our training into what our agents learn all year around. This made it very effortless for them to work the Phonathon.”

“It was a new expe­rience for me. For the first time we were the ones making the out­going calls,” Ven­trella said. “Overall, I really enjoyed talking to people and getting to know friends of the college.”

In addition to the student Contact Center workers, the college also had parents and ath­letes make phone calls for their own Phonathon cam­paigns. Each group tar­geted a dif­ferent audience and fundraising area. The ath­letes vol­un­teered to call alumni to raise money for ath­letic pro­grams. Parents called pre­vious sup­porters of the college to support the college endowment. The student Contact Center workers mainly called sub­scribers of the Hillsdale College newsletter “Imprimis” with the goal of both raising awareness and funds for the college’s Barney Charter School Ini­tiative.

Spiteri said the inclusion of the Barney Charter School Ini­tiative reflects a recent push by the college to expand their influence in edu­cation.

“The ini­tiative is trying to raise a sub­stantial amount for their endowment. They want to open 50 schools; they’re at around 16 right now,” Spiteri said. “ Most of the people we called were Imprimis sub­scribers and had never heard of it before. We were edu­cating them, asking them about their views on public edu­cation.”

“In the long run if people are asking for more infor­mation, even­tually they’ll give money. That’s because it’s such a great cause,” Spiteri said. 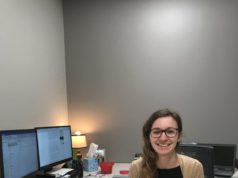 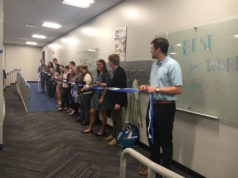