There’s a story about a pros­titute who couldn’t enter a church even after she con­verted to Chris­tianity because of her pro­fession. Not to be deterred from prayer, she tied knots in a blanket and offered each act up to God.

Her physical acts of prayer inspired sophomore Luke Woltanski, a Koon res­ident assistant, to play music in the lobby every Sat­urday.

“Koon­certs” are weekly con­certs in the men’s dorm, offering stu­dents a brief respite from their labors. Every Sat­urday, a few res­i­dents gather in the lobby to play music for anyone who pays the dorm a visit. The idea started as a play on the dorm’s name, but as a Catholic out­reach min­ister, Woltanski made it a reality.

One Sat­urday in November, Woltanski wore ripped jeans and slip-ons and sat on a couch with a har­monica mounted on his acoustic guitar. After passing around a notebook in which audience members can write prayer inten­tions — which Woltanski refuses to read out of respect — the musi­cians launched into a five-song set.

He played alongside sophomore Dalton Sala, with freshman Noel Schroeder joining them on tam­bourine for numbers like “Swing Low, Sweet Chariot.” They insisted the audience join in the chorus, while Schroeder pulled up the lyrics on his phone.

“Do you want to do a solo on the tam­bourine?” Woltanski asked Schroeder.

“We could make it a thing.”

Rather than preparing a set, the musi­cians asked the audience for song sug­ges­tions, usually gospel and folk music, and closed with “Man of Con­stant Sorrow” from “Oh Brother, Where Art Thou?” Woltanski said that in pre­vious per­for­mances they had some­times picked a key to play in and impro­vised music and lyrics to it.

“I think music made with people on the spot is the purest form of music, because it’s some­thing that you hear once and never hear the same way again,” Sala said.

The three musi­cians only had an audience of four, but after the fifth song they explained the little Koon lobby could be packed with 15 people. The event spread by word of mouth and could become a central element of the dorm’s com­munity, according to Sala.

“We have a lot of really pas­sionate music people, and I think that could be part of our culture in the future,” he said.

The dorm’s small yet open envi­ronment has played a key role in drawing res­i­dents to the event, according to the audience members. Most keep their doors open all day, making it dif­ficult to avoid Woltanski’s har­monica.

“I wanted to get closer to the guys in the dorm because there aren’t a lot of us here,” freshman Kenneth Skoug said. “Getting to hear some of the guys I live with play music is pretty fun.” 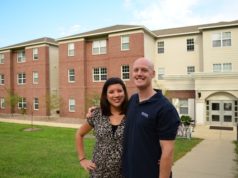