The City of Hillsdale is so anxious for inno­vation, it can’t pause for a comma.

To com­plement a new logo, the city is con­sid­ering a few taglines, including: “Where Tra­dition, Edu­cation and Inno­vation Thrive.” But if Hillsdale really stands by those values, it should insert the Oxford comma after “edu­cation.”

The Oxford (or serial) comma pre­cedes the con­junction in a series of terms or phrases — it’s the one after “tigers” in “lions, tigers, and bears.” So named because of its tra­di­tional use by the Oxford Uni­versity Press, the Oxford comma finds support in such grammar heavy­weights as “The Chicago Manual of Style”, “The Ele­ments of Style” by William Strunk and E.B. White, and the U.S. Gov­ernment Printing Office style guide. Its oppo­nents include style books of the Asso­ciated Press and the New York Times.

Those against the comma claim it’s pre­ten­tious. It’s clunky. It takes up space and ink and the time it takes to stroke a key.

But most style guides argue that the Oxford comma dispels ambi­guity.

Erasing the Oxford comma can wreak havoc. You can confuse people (“I met two guys, Jane and Sue”), defame people (“I like weirdos, George Wash­ington and Lincoln”), or even commit heresy (“This book is ded­i­cated to my parents, God and Oprah”). Adding a comma makes all the dif­ference.

You can also lose a $10 million lawsuit. Last March, truckers sued a dairy company over a con­tract clause spec­i­fying what was exempt from overtime pay: “the canning, pro­cessing, pre­serving, freezing, drying, mar­keting, storing, packing for shipment or dis­tri­b­ution of [food products].”

Finding no Oxford comma after “shipment,” the truckers argued the clause said they were exempt from packing for dis­tri­b­ution, not dis­tri­b­ution itself. They won the case, and the dairy company knew the supreme value of the Oxford comma.

The lack of an Oxford comma in the Hillsdale tagline probably won’t stir up a lawsuit, and in the case of Hillsdale’s tagline, it doesn’t actually make a dif­ference in meaning. Why not save the ink and space and throw it out?

Because meaning isn’t just a tech­nical thing — it’s con­veyed in rhythm and flow, too. Grammar is a matter of aes­thetics and common sense, and the Oxford comma keeps it that way.

Recent research has explored an increas­ingly evident con­nection between grammar and rhythm: People who are sen­sitive to one are sen­sitive to the other. A study by a devel­op­mental research center at Van­derbilt Uni­versity found that children who can dis­tin­guish musical rhythm are better at grammar.

The con­nection makes sense. Grammar rules aren’t just there for rules’ sake. They create rhythm and that con­tributes to meaning. Commas make us pause. Dashes make us pause — longer. The pauses convey emphasis and impor­tance.

“The ‘rules’ of grammar aren’t rules at all. They’re cre­ative tools for organ­ising and pre­senting our thoughts, for giving structure to what we mean and giving meaning to the form. You can hear them, feel them, just like the beat in a song,” writes Saga Briggs, man­aging editor for an edu­cation blog.

The Oxford comma is a breath, a clar­ifier, and a rhythm maker. In a world where text mes­sages murder punc­tu­ation and vowels, it’s a taste of ele­gance and a nod to tra­dition. In a culture of breathless activity and impa­tience, it makes us pause. And, with rhythm, it conveys subtle meaning.

Maybe the eagerness to drop the comma comes from a hunger for min­i­malism, effi­ciency, and speed common to our modern culture that we should avoid. In any case, most people would prefer to keep it.

A poll by the website FiveThir­tyEight found that most Amer­icans — 57 percent — prefer the use of the Oxford comma. Among 18-to-29-year-olds, support soared to 79 percent.

The City of Hillsdale’s median age, according to 2015 data, is 27.2. And it’s just a guess, but the 1500 stu­dents who flood the town every year might have a nerdy love for grammar and all things Oxford.

If Hillsdale is about tra­dition, edu­cation, and inno­vation — and the people — it should stick to this age-old mark of rhythm, sense, and clarity. 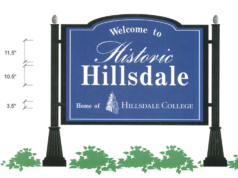 ‘Historic Hillsdale’ is more than a college