While rum­maging through my car last week, I hap­pened to dredge up Tom Petty’s anthology CD from my glove box. I smiled when I found it. He was my ultimate road-trip com­panion, and I hadn’t heard his songs in a while. By hap­pen­stance, that same evening, a friend asked me about Tom Petty’s greatest song. We ended up debating this topic over beers, lis­tening to a handful of singles, and arguing about his best album. By the end of the con­ver­sation, I think we settled on “American Girl.”

When I heard the news of his passing on Monday, I was gutted. It seems too soon.
Tom Petty, with a good-ol’-boy twang in his voice, a sly smile, and catchy guitar riffs, cap­tured the American spirit in the form of rock ’n’ roll. Much like a Norman Rockwell painting, a fresh slice of apple pie, or a hot dog on opening day, there is some­thing quin­tes­sen­tially American about Tom Petty.

Unlike other American acts, whose music is tied to a genre or region, Tom Petty’s down-home-roots sound seems to tran­scend location and time. The East Coast has Spring­steen. The Allman Brothers Band, Cree­dence Clear­water Revival, and Lynyrd Skynyrd each sound dis­tinc­tively Southern, but Tom Petty — despite hailing from Gainesville, Florida — is Amer­icana at its best.

He sounds like a bonfire and beers with friends on a Friday night. He sounds like a road trip across country with someone you love. He sounds like a tailgate, a baseball game, or finally working up the courage to tell your girl­friend you love her. He was a champion of the underdogs, of the “losers,” of the people unafraid to chase their American dreams. He sang about Jesus, Elvis, and freedom.

Tom Petty’s loss is per­sonal, not only because his legacy is linked to the American expe­rience, but because Petty sup­plied the sound­track to our best mem­ories. While he may not have been per­sonally present in your life, he was through his music. It doesn’t matter if you are 18 or 55, at some point in your life you’ve probably screamed the lyrics to “Free Falling” sur­rounded by friends, laughing together as you yelled the chorus. If you’re from Indiana, you probably take a certain pride in “Mary Jane’s Last Dance” and feel the need to turn the volume up when Petty men­tions those Indiana boys on an Indiana night. And “Here Comes My Girl” makes everyone feel at least a little in love.

His music per­fectly cap­tures what it feels like being a teenager who’s just trying to figure it all out. He was able to get at the heart of what people feel and make it acces­sible with rock ’n’ roll. His lyrics were simple. His songs were simple. He never pre­tended to be some­thing or someone more than he was. He wasn’t a flashy stage presence, but through his sim­plicity, he was able to solidify those feelings that are hard to express.
Tom Petty, aside from being an amazing talent, was a humble man. While other rock stars swirled within gossip columns and cap­i­talized on the sordid details of their lives, Petty kept his focus on his work and away from the buzz of Hol­lywood. Petty was so aloof about his own success, it’s almost hard to realize just how rel­evant he remained throughout the years.

Between his solo work and his col­lab­o­rative ven­tures, Petty was respon­sible for 19 studio albums. Out of the 68 singles he released, Petty racked up 28 top-ten hits — more than any other act since the chart’s history, according to Bill­board. He died shortly after com­pleting his 40th reunion tour. His last album, “Hyp­notic Eye,” was crit­i­cally acclaimed and still had that Tom Petty sound. He ded­i­cated his life to making good music. And while Petty may have pre­ferred to go unno­ticed, his legacy and pro­lific accom­plish­ments will be remem­bered and revered.

And like the American spirit, Tom Petty’s music endures and con­tinues to move younger gen­er­a­tions. Teenagers and adults, no matter when or where they grew up, will always expe­rience the same emo­tions Petty sings about in his songs. Hope­fully, like so many gen­er­a­tions before them, they will seek his music as a source of comfort and moti­vation in years to come. 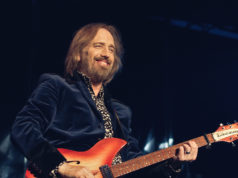