Pro­fessor of History David Stewart, who assisted in cre­ating the Western and American Her­itage readers, is cre­ating another book of primary sources for a new class on the mil­itary history of the American Rev­o­lution.

The upper-level elective history class, which Stewart plans to teach next semester, will focus specif­i­cally on cam­paigns and battles, foreign involvement in the war, and sup­plying goods to the U.S. Army and the U.S. Navy during the rev­o­lution.

“We often see the American Rev­o­lution in too unique of a context, rather than placing it in this broader European context that we lose sight of,” Stewart said.

A pre­lim­inary edition of the reader and the class will be ready for next semester, although it will need tin­kering, according to Stewart. The reader will be com­pa­rable to the current Logic and Rhetoric reader in length and style. Over time, it will develop into a reader similar to the ones available for Western and American Her­itage.

“I thought it would be fun to offer some­thing dif­ferent, a class that stu­dents don’t always get a chance to take,” Stewart said.

Senior Kara Schmidt and junior Gar­rison Grisedale are helping Stewart with the research.

According to Grisedale, their job is finding primary sources, including diaries and letters, from various battles and cam­paigns. Grisedale and Schmidt compile these sources into PDF doc­u­ments for Stewart to read. They will also assist with editing the man­u­script prior to pub­lishing. Both stu­dents are pol­itics majors and accepted this paid position as part of the George Wash­ington Fel­lowship, the chief com­ponent of Hillsdale’s under­graduate edu­cation pro­grams in Wash­ington, D.C.

“Really any primary source account is where you get an inside look at the battles, at people breaking it down and saying what they saw, like people recounting the bullets flying by them,” Grisedale said.

Schmidt, who said she has always been fas­ci­nated with the history of the Rev­o­lution, is cur­rently researching the Quebec cam­paign. She will also research the role Loy­alists, or Tories played in the Rev­o­lution.

Schmidt said she believes this course will be inter­esting, as the infor­mation about the battles will be based on firsthand accounts and primary sources. She and Grisedale are about a third of the way done with their research.

Although pro­fessors typ­i­cally gear these spe­cialized classes toward upper-level history majors, Schmidt encourages people of all majors to con­sider taking the class.

“I would not just limit the class to history people,” Schmidt said. “Everybody should know history, and it affects all of us as Amer­icans.” 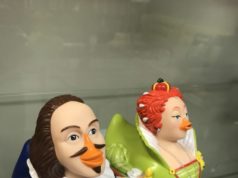 The Army of Duckness