The Royal Swedish Academy of Sci­ences awarded researchers the Nobel Prize in Physics last week for the first detection of grav­i­ta­tional waves, thus con­firming one of Albert Einstein’s century-old pre­dic­tions.

“It’s kind of surreal to me that it actually hap­pened,” said Ryan Lang, assistant pro­fessor of physics with aca­demic ties to the award-winning researchers from the Laser Inter­fer­ometer Grav­i­ta­tional-Wave Obser­vatory. “Log­i­cally I wasn’t sur­prised, but it’s still amazing to see it actually happen: people that you’ve met and inter­acted with becoming Nobel lau­reates.”

According to Lang, LIGO’s grav­i­ta­tional wave detec­tions are one of the most ground­breaking dis­cov­eries in physics of this century. Both he and a Hillsdale alumnus con­tributed to the LIGO col­lab­o­ration.

Grav­i­ta­tional waves come from merging black holes from a billion light years away, according to Lang. When these grav­i­ta­tional waves travel to Earth, they slightly squeeze and stretch every­thing on the Earth. To detect these waves, LIGO has two detectors in Wash­ington and Louisiana that contain free-hanging mirrors with lasers bouncing back and forth between them. If a grav­i­ta­tional wave passes through, it will move the mirrors slightly — roughly a bil­lionth of an atom’s diameter rel­ative to each other — and the bouncing laser will signal any movement that occurs.

“Wave detectors are more like ears than like eyes­; you don’t point them,” Lang said. “With ears, we hear things from all around, and grav­i­ta­tional wave detectors work the same way: They get signals from all over, and it’s kind of hard to tell exactly where they come from…When you have a third detector like the one in Italy, it brings it down to a much more man­ageable size region.”

Lang said the third detector is also sig­nif­icant, because it helps sci­en­tists determine exactly how a grav­i­ta­tional wave stretches a detector. This was a test LIGO could not perform with only two detectors.

One of Lang’s former stu­dents, Joshua Ramette ’17, worked for LIGO in the summer of 2015, specif­i­cally assisting with a device called a ring heater on the Louisiana detector’s mirrors. The ring heater helps to keep the tem­per­ature con­sistent across the entire mirror. Without the ring-heater, the laser will heat the middle of the mirror more than the edges and thereby disturb the instrument’s results.

Ramette said this is not a large problem when the lasers are on low power, but in order to use the instrument at its full capacity, LIGO would even­tually need a math­e­matical model to explicitly show how heating the mirror with the ring-heater would affect the tem­per­ature of the mirror. Ramette developed this model for the col­lab­o­ration and pub­lished a paper about it.

“He’s pretty famous for a lot of stuff about black holes and popular books and things like that,” Lang said. “He’s sort of the the­orist of the group.”

Ramette, who now is cur­rently pur­suing his doc­torate at MIT, said he got to par­tic­ipate in the fes­tiv­ities for Nobel Prize winner Rainer Weiss, an emeritus pro­fessor of physics at MIT and one of LIGO’s founders.

“There was a big party that was thrown for Rai here,” Ramette said. “I actually got to stop by and see him give his impromptu Nobel Prize talk here on campus…What was really great was that he was super humble in that he acknowl­edged that LIGO’s dis­covery was the work of over a thousand people working for many decades.”

Assistant Pro­fessor of Physics Timothy Dolch also studies grav­i­ta­tional waves that are emitted from black holes that are much earlier in the process of merging and also have a much larger mass than the ones LIGO studies. Dolch said the Nobel Prize award was a victory for the whole field of grav­i­ta­tional-wave study.

“The first thing I did in the morning was check my phone to see if they got it,” Dolch said. “It was really good news obvi­ously for LIGO but then for our whole field, too. One of the reasons this is so sig­nif­icant is that this is a whole new way of doing astronomy, and LIGO is one of the instru­ments that is helping open up the grav­i­ta­tional wave sky.”

Lang also said the award is sig­nif­icant to everyone in the LIGO com­munity.

“It was a good week for everybody,” Lang said. “I mean, only three people won, but it was the work of a lot of people that got them here, and the whole community’s excited because it’s what we’ve been hoping for for decades.” 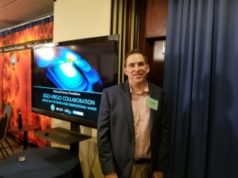 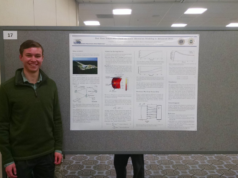 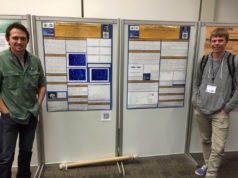