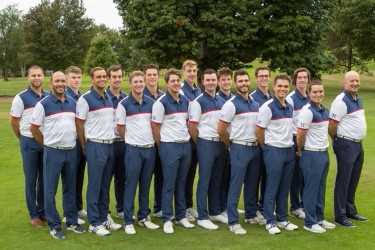 The tour­nament was played at the Mohawk Golf and Country Club in Tiffin, Ohio. The team’s three-round score was 877, which tied for third place with Tiffin Uni­versity and put them only eight strokes behind the tour­nament winner, Wayne State Uni­versity.

Head coach Nathan Gilchrist said the team has to beat the best schools, like Grand Valley and Wayne State, if they want to win the G‑MAC.

“They have finally seen enough com­pet­itive sit­u­a­tions that not too much bothers them,” he said. “They are very hungry to beat Grand Valley and the other top teams in the country. They have the ability to do so, they just have to elim­inate all mis­takes during every round. There is no room for error when chasing down the top teams.”

He said the team is growing accus­tomed to the stressful tour­nament envi­ronment.

“They have made less mis­takes this season, but they are also men­tally tougher this year than in the past,” Gilchrist said. “Being such a young team, it takes time to develop cal­luses in a com­pet­itive envi­ronment.”

Gilchrist said each tournament’s roster changes based on who’s playing the best each week.

“We decided to put Logan and Andy in the lineup because they played very well at the Irish Hills Inter­col­le­giate,” Gilchrist said. “We have a system that any player that fin­ishes in the top 10 of a tour­nament is exempt into the next tour­nament. We con­ducted a three-day qual­ifier for the final spot at Tiffin and Henry was the low man for that qual­ifier.”

Grayson shot 219 and tied for 17th. He shot an even par the first two rounds and three over par in the final round. His first round score of 72 was his best round of tour­nament college golf.

“The last round I started hitting the ball a little bit sideways com­pared to the first round, and it was much more of a ‘grind it out’ round,” Grayson said.

He said he’s been learning this year from the team’s leaders.

“The biggest thing I’ve tried to improve this year is my course man­agement,” he said. “Watching Joel and Liam play these past couple years I’ve noticed they keep it in play a lot and I tried to follow their lead on that. I’ve learned I don’t need to hit driver on every hole because I can make birdie going with a 3 iron, then 9 iron as easily as I can going with driver, then sand wedge.”

Grayson said it’s dis­ap­pointing to lose to Grand Valley by such a small margin.

“I could easily find two shots in my three rounds I could’ve cut that would have helped us beat them, and I’m sure the other guys could, too,” he said. “As a team, I think we can play with them now, and if we play our best, then we can beat them, and this week shows it.”

Junior Joel Pietila, who has struggled with shoulder pain, led the team for the second time in three tour­na­ments. He placed third as an indi­vidual with a score of 212.

“I haven’t had any pain the last couple weeks, which is very encour­aging,” he said. “This weekend was probably the best I’ve hit the ball since my injury, and I felt much more com­fortable.”

He said the team’s com­pet­i­tiveness with Grand Valley has focused his game.

“It’s very moti­vating to keep focusing on every shot, because every shot truly does matter,” Pietila said. “I’m excited to see our con­fi­dence levels rise as we finally are seeing the results from the work we’ve put in. We are very com­pet­itive, not only against other teams, but also against each other, and has helped us shoot better scores. We just need to stick to that mindset and not get too far ahead of our­selves, and we’ll keep climbing the leader­boards.”

Swingin’ with the boys: Balkan is a team leader