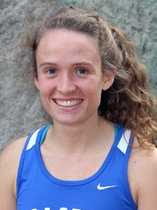 How long have you been running?

Did you always know you wanted to run in college?

I was kind of reluctant to run in college just because it’s always been dif­ficult espe­cially in terms of com­peting, so I didn’t know if I wanted to con­tinue that in college. But I have great parents and they always told me to go for it. They’re tough-love cheer­leaders of mine, and it’s been the best decision I have ever made.

Did you play other sports before coming to Hillsdale?

How did you first learn about the cross country program at Hillsdale?

Well, I was inter­ested in the school just for the aca­d­emics and then I just looked into running here and that was an attractive part of Hillsdale because I was looking at other Great Books, liberal arts col­leges that didn’t have great ath­letics, but Hillsdale had a leg up because I knew I was going to run and at least try it out out the first year. I didn’t hear about Hillsdale sep­a­rately for running though. I def­i­nitely came for the aca­d­emics, it just so hap­pened that I stumbled upon it. Espe­cially my freshman and sophomore years, it hap­pened to be one of the best pro­grams in the country.

How do you usually train? What are prac­tices like here?

This year, I usually do 65 miles a week. They really build you up. Freshman year, I usually ran about 50 miles a week. Sophomore year, a little more. Junior year, a little more than that. Sunday, we have our long runs. Tuesdays and Fridays are high volume days, meaning just a lot of mileage. We’re double on Tuesdays and Thursdays. Wednesdays and Sat­urdays are easy days. I used to do a lot more cross training freshman through junior year but since my mileage has been bumped up this year,  I don’t have time for cross training. The amount of dis­tance I’m running now makes the amount of volume good enough. In years past, I was doing the same volume but running fewer miles and doing more cross training.

How has being on the Hillsdale team affected you per­sonally?

I love school, I love school. I learn so much. That’s why I choose to come to school here. The most per­sonal growth and chal­lenge. It sounds so cliche but the things that I learn in the classroom, cross country and track are the places I can use those things. I would not be the same person. Again, I know it sounds cliche but it’s true. Hillsdale has just taught me so much; mostly about gritting your teeth and about getting through things that you really don’t want to do and things that are painful at times. Now I can do it and enjoy it also. I really tried to be present and not as anxious sophomore year, which was my most suc­cessful year in terms of outward success. Junior year was pretty rough. We had dif­ferent vari­ables that changed and I actually thought I was going to leave the team. I thought that I had kinda exhausted myself but through the grace of God, my parents, my team­mates, I’m here this year and this year so far has been the best year. I don’t really have illu­sions about what to expect. I’ve failed pretty dra­mat­i­cally on a public scale. But it’s good though and now I’ve reached really great highs and great lows. I just want to have fun this year. I don’t want to be overcome by fear. Running is the scariest thing in my life. Putting yourself out there, it feels really risky but I have this great oppor­tunity that not a lot of people have with good people, the best people just work alongside you, your coaches and team­mates. Sunday morning, you just do it.

What was it like being named Athlete of the Week?

It was cool. I’m excited about the new con­ference that we’re in. The G‑MAC, so that’s going to be really good. I didn’t know I was Athlete of the Week until my coach told me because I’m not on twitter actually.  It was great. I’m really excited for the new con­ference. We will be on a more even playing field. We com­peted really well in the GLIAC con­ference but it was more of a David and Goliath.

How did you feel being named All-American?

So I had 8 All-Amer­icans. Freshman year was my first cross country season. They’re good goals; they’ve been a good standard. We’re sup­posed to do our best and I know that I can get there. It’s been a nice way to gauge how my seasons go. And of course it’s hum­bling. It’s def­i­nitely easy to get pumped up about it but really you’re just sup­posed to do your best. I don’t work harder than anyone else on the team. There are things people work hard for so I don’t want to take it for granted just because you have your title and can now settle. The work is not over you still have to keep doing your best. Whether that means All-American or whatever it means, it doesn’t really matter. Doing your best is what matters, and def­i­nitely integrity. I keep them all in my room though.

Who do you look up to in running and in life?

My friend Andrea Bodary, a senior on the team with me. She just is really coura­geous and we both share some of the same fears about running and racing. She gets on the line and powers through. She just works really hard. She’s got the best work ethic that I know of and gives con­stant effort and she struggles with injury a lot. She has had a lot but still just goes at it.

What was it like training with the Oren sisters?

It was so good. Molly is one of my best friends. We’ve just run so many miles together —  like thou­sands of miles. I know that sounds crazy, but really thou­sands of miles. Obvi­ously Emily is like a rock star and when she was on the team, her and Molly and Christina Galat (now Perkins), and myself, it was like this crazy thing where we had some suc­cessful races and we looked at each other and were like we could do some crazy things. We got second at Indoor Nationals by 2 points, which is like nothing. I know Molly better because she was only a year ahead of me. But we just ran, trained, played off of each other’s strengths and weak­nesses really well, and we were really good friends. Hon­estly as I said last year was really rough and I couldn’t have done it without Molly, she’s my buddy. And Emily is obvi­ously just — I remember watching her run like a 4:35 mile at Indoor Nationals my sophomore year, which was the fastest mile in the country in all divi­sions. It was just insane. And she ran like four other races; it was really crazy.

What’s your favorite show on Netflix?

I love Stranger Things on Netflix. I think it’s well-done and well-directed. It’s not just all about sex. That’s like a weird thing to say, but it’s just about kids and friendship and that’s awesome. Also I like Stephen King so that’s that whole deal.