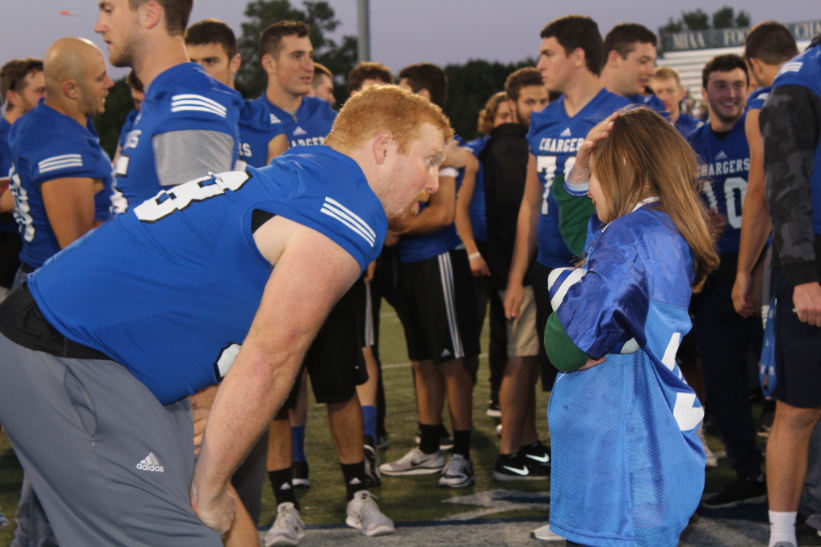 Senior center Danny Drummond has started in 34 football games in his college career. But it was Friday’s game that left him with a smile he couldn’t wipe off his face.

Drummond and the rest of the football team, with the Hillsdale cheer team and pep band, par­tic­i­pated in Victory Day, an event that allowed nine children with special needs to be Chargers for the evening, getting the full “game day experience.”

It was a small event that made a big impact — on both the players and participants.

“It was cool to see how much the guys got into it,” Drummond said. “It was amazing to see so much joy on the kids’ faces when they scored a touchdown or caught a pass.”

As the kids cruised through the practice drills, team members cheered loudly, encour­aging them to keep going. Keith Otterbein, head coach of Hillsdale’s football team, said he knew his players would embrace the oppor­tunity to engage with the kids.

“I told them that this is the kind of event that’s only as good as you make it,” he said. “We are so for­tunate to be here at Hillsdale. This was an oppor­tunity for us to give back.”

Victory Day was the perfect fit for the football program, Otterbein said. Its core prin­ciples and its ded­i­cation to building the next gen­er­ation of leaders align with Hillsdale’s mission and every­thing the team stands for.

The event con­tinued into Saturday’s game, with Hillsdale and Reading High School football players men­toring 11 par­tic­i­pants with special needs during halftime, showing them how to throw, catch, kick, and tackle.

“The little things we take for granted, like running out on the football field, were huge for them,” junior quar­terback Chance Stewart said.

Otterbein said he hopes to con­tinue spon­soring Victory Day in the years to come, because it’s a program that ben­efits both the players and the community.

“It works both ways — college players are given the oppor­tunity to mix with the com­munity, and the kids have men to look up to.”

Senior Zoe Harness, a captain of the cheer team, said Victory Day was a good way for the cheer team to begin expanding com­munity out­reach, some­thing she said is one of this year’s goals. Giving back is a fun­da­mental part of Hillsdale’s pos­itive mission, she said. The cheer team wants to be a part of that and promote it in the community.

“Victory Day was such a great oppor­tunity to be inclusive and kind. It’s a program that fosters a com­munity that cares about every single person,” Harness said.

Under the lights, with the pep bland playing and the cheer­leaders applauding them, Stewart said it was just like a game. Though it was just another Friday night for the players, for the kids it was an expe­rience that will be apart of them forever, he said.

Remem­bering the joy he shared in the night before, Drummond walked onto the field on Sat­urday, ready to start his 34th game. Being apart of Victory Day helped him play better that day, he said.

“Usually when you give to others, you receive so much more blessing yourself,” Drummond said. “We walked onto the field on Friday knowing we would make those kids’ days, but it was pretty apparent they were going to give some­thing to us as well. And I carried it with me on Saturday.”