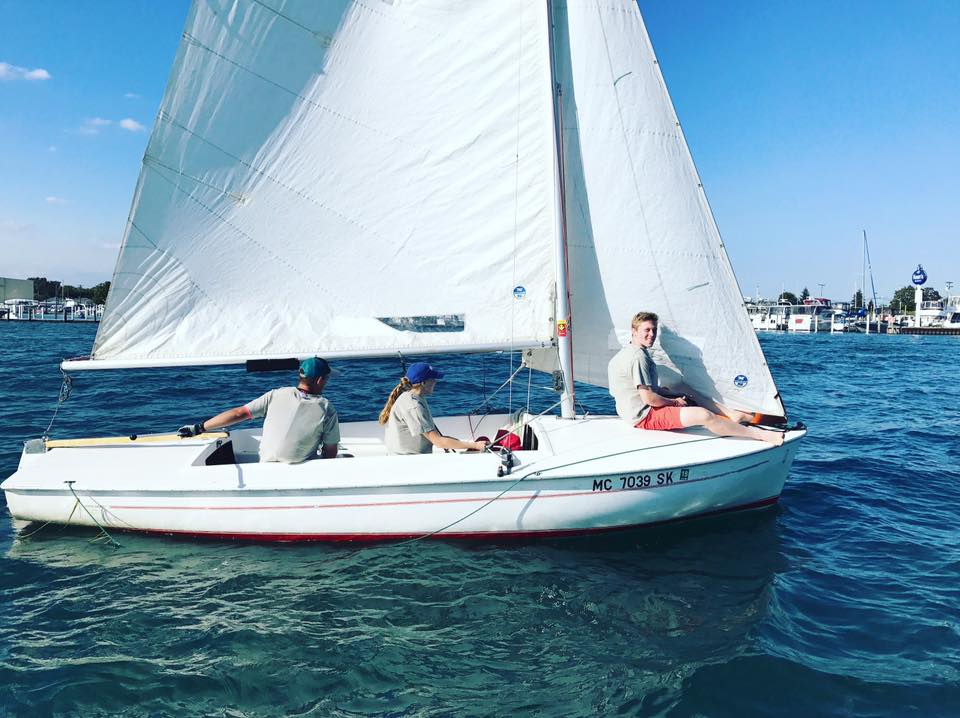 The Hillsdale College Sailing Club com­peted in the Midwest Col­le­giate Sailing Asso­ci­ation Sloop Cham­pi­onship on Sat­urday and Sunday at the Detroit Yacht Club.

The Sailing Club took two teams to Detroit to par­tic­ipate in the regatta. The first Charger team, skip­pered by freshman Kaitlyn Rowland and crewed by junior Michael Whitman and freshman Julia Powell, took sixth place in the regatta.

“Most teams were better than us, but it felt good that one of our teams didn’t finish last,” Diet­derich said.

Fin­ishing order dic­tated the scoring of the event. Offi­cials placed buoys in the river according to wind con­di­tions, and the sailors had to guide their boats between them as they raced for time. The total position finish after eight runs down the course made up the final scores, making the lowest scoring team the winner of the regatta.

Despite the official scoring of the event, amateur sailing is about improvement.

“It didn’t feel like we were racing the other teams, we were just trying to beat our own time,” Hayes said. “The other teams were so friendly and sup­portive.”

Grand Valley State Uni­versity won the event with 12 points and Michigan State’s team fin­ished close behind with 18 points. The Hillsdale team skip­pered by Kaitlin Rowland fin­ished in 6th place with 51 points ahead of the Indiana Hoosiers and the other Charger team which earned 61 points. Rowland’s boat fin­ished in 5th place three times during the com­pe­tition.

“I am proud of the group. By Sunday, we did much better. On our last race we got 6th and beat Indiana,” Diet­derich said.

The Detroit Yacht club fur­nished the boats for the events which were Flying Scot models that fit a crew of three com­fortably. Though college regatta nor­mally use club 420 model boats with two people, the new members of the Sailing Club didn’t know any dif­ferent.

Hayes had never sailed before the event.

“I had no idea where the port side was or what a jib was,” she said. “It was a like learning a foreign lan­guage at first.”

After fum­bling with some rigging, Hayes heard older men shouting at her from the shore. But after she explained that she had never been sailing before, they quickly changed their tune.

“An older man took me aside right when I got back to shore and we went straight to the basics. He taught me how to tie some knots,” she said.

Pomerleau has expe­rience sailing in Michigan after learning on Lake Michigan near Tra­verse City. And though he has years of sailing expe­rience and though the club had par­tic­i­pated in an regatta at Hope College in Holland Michigan last April, prior to this event, he had never sailed on a river before.

The new lead­ership from Rowland and Dietrich impressed Pomerleau as did the response of the new members.

“A number of freshman helped crew the boats and they had great par­tic­i­pation and engagement from the start,” he said.

The con­di­tions were nearly ideal for sailing last weekend with afternoon gusts between five and six miles per hour. “The weather was super nice and sunny. But for sailing we needed wind which did not come until the afternoon, Hayes said. “Each morning we just sat around at the yacht club studying until the wind picked up at 1 p.m.”

The hos­pi­tality of the sailing com­munity impressed the team, espe­cially after the orga­nizers of the regatta housed the teams in private res­i­dences and fed them.

“On Sat­urday night, we stayed in a 50 foot yacht together. It was tight but we all either got to share a bed or sleep on deck,” Pomerleau said.

Some of the details of sleeping on a ship per­plexed Hayes.

“We had to make sure the windows of the yacht were closed, because they said that they had a raccoon problem,” she said.

Pearce thought that the oppor­tunity to stay on the yacht was an appro­priate intro­duction to the sport.

The Sailing Club has big aspi­ra­tions moving forward. Pomerleau said that the club is hoping to buy gear and boats with the help of a donor within the next month. He also said that the group can practice on Baw Beese, which has suf­fi­cient wind for sailing and is large enough for full race courses.

With the help of new lead­ership and excited new members, the Sailing Club hopes to perform better each time they hit the water.

“It was a fun weekend. We def­i­nitely improved upon where we started,” Diet­derich said.