Robert Mirabal, an acclaimed Native American musician, per­formed with the trail­blazing string quartet ETHEL as part of the Hillsdale College Pro­fes­sional Artist Series. The group pre­sented  its album “The River.”

Mirabal told the audience sin­cerity is the key to con­necting with the music and, as a result, the audience.

“The music is such a tiny part of what is really actually there,” Mirabal said. “Doing it for so many years, I know what par­ticular parts to choose that are rel­evant to the time, the gen­er­ation, and to the audience. It’s about cre­ating com­munity, and that’s what’s lacking now.”

Mirabal played a variety of instru­ments, including an assortment of his homemade tra­di­tional flutes. In between pieces, Mirabal explained the meaning behind the texts and tunes that made up the set. The lyrics came from his tra­di­tional native culture, and some were stories that make up the gen­er­a­tional oral tra­dition that is so important to his Pueblo tribe in New Mexico.

Mirabal often incor­po­rated hand signs into his songs to convey the customs of his culture. He moved around while singing and playing and inter­acted with the audience at times. During the final song, Mirabal walked through the aisles as he sang.

“He went around and shook everyone’s hands. I thought that was neat,” said JoAnn Arendt, house director at Gal­loway Res­i­dence. “That was kind of the high­light of the whole thing.”

ETHEL, the quartet, con­sisted of three violins and a cello. Col­lab­o­rating and touring with Mirabal broadened the group’s musical bound­aries, according to founding member and cellist Dorothy Lawson.

“That was our first step outside — looking at other ways of building concert music that might sound more con­tem­porary, rel­evant, exciting, and enter­taining,” she said. It came from “an urge to be more whole and humane and embrace more, bring more of our lives together, bring more people together.”

Lawson said the group used a foun­dation in clas­sical training to branch out musi­cally and cul­turally.

“When we began just before the mil­lennium, the clas­sical music world had kind of strangled itself because it had such firm bound­aries around every­thing that was okay in a concert hall and the audience was just fed up with it,” she said.

The day of the concert, Mirabal and ETHEL held a mas­ter­class geared toward Hillsdale music stu­dents. Pro­fessor and Music Department Chairman James Holleman described the session as a once-in-a-lifetime oppor­tunity to expe­rience a dif­ferent culture through music.

“The mas­ter­class was amazing,” Holleman said. “[Mirabal] came out and opened himself and his world up to the stu­dents. It was fas­ci­nating. I wish every student on campus had been there. It was an insight we just don’t get.”

ETHEL and Mirabal invited some of the stu­dents who were at the class to play along with them for their last piece of the set that evening.

Freshman Gabriel Meyer, who plays the cello, said after the quartet heard some strings stu­dents working on impro­vi­sa­tional music during the mas­ter­class, they invited the stu­dents to join them on stage for the per­for­mance.

“I was kinda freaked out. I almost didn’t do it,” Meyer said. “But then I heard one song at the concert and thought, ‘Shoot, this is too awesome, I have to be a part of this!’ It was amazing to make such beau­tiful music for such tal­ented people.”

For other stu­dents in the audience, the expe­rience was just as unique and rewarding.

“Some of the sounds pro­duced by the instru­ments were strange to hear at first but con­tributed to the music in beau­tiful ways,” freshman Ben Jagoda said. “It is inter­esting to me that cul­tures all over the world have a similar, basic under­standing of music.” 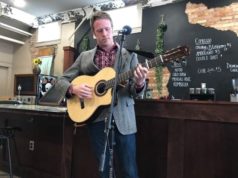 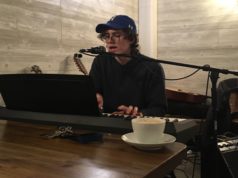 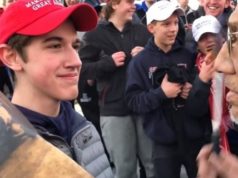