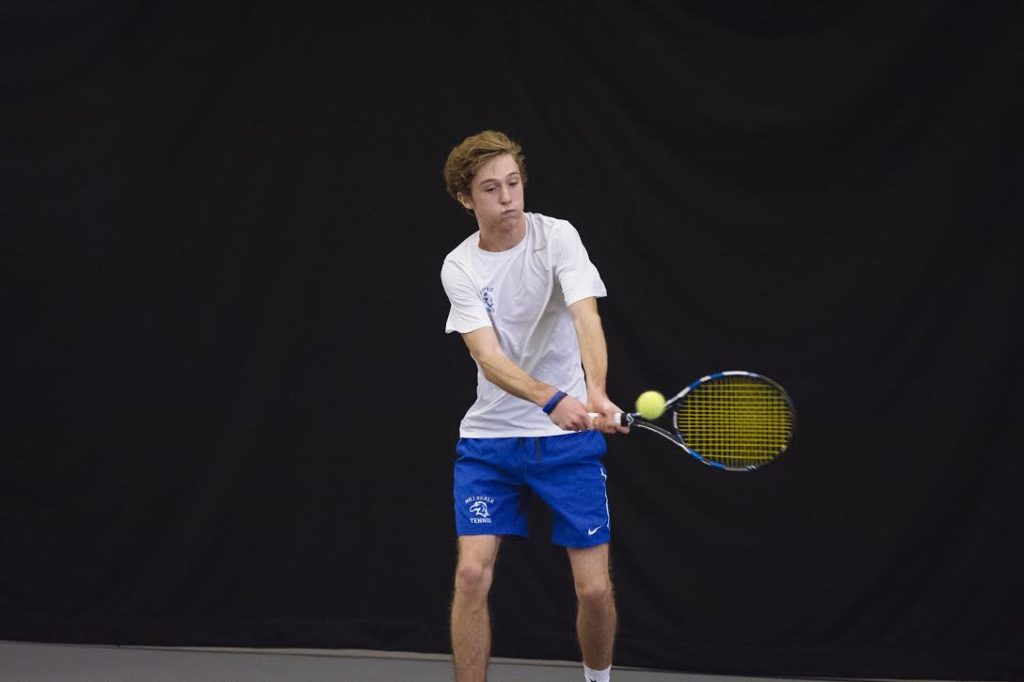 The Chargers were missing almost half of its team but still com­peted well.

Adams was awarded the G‑MAC men’s tennis Player of the Week award on Tuesday.

Sophomore Michael Szabo advanced three rounds in the B draw before he was knocked out 6-­3, 4­-6, 10-­7 by Andrew Dones of Southern Indiana.

Sophomore Milan Mirkovic was sick during the tour­nament and attempted to compete anyway. Mirkovic lost his first round 6 – 4, 6 – 3 to Griffin Mertz of Wayne State, and was pulled out by head coach Keith Turner.

Sophomore Julien Clouette and Szabo won one B draw doubles match before they were knocked out in the quar­ter­finals 8 – 3 by Mis­souri-St. Louis.

De Enrique Schmidt and Katz beat two doubles teams before they were knocked out in the semi­finals 8 – 3 by Grand Valley State.

Turner said the ITA, an indi­vidual tour­nament, is the biggest tennis com­pe­tition of the fall.

“At this tour­nament, if you win a match, it’s suc­cessful. It’s all the teams in the Midwest, so the best players from the Midwest are there, so for the most part there is no easy matches,” Turner said. “If you win two or three rounds, you’ve done a pretty good job in the tour­nament.”

Teams compete from the GLIAC, the G‑MAC, and across the Midwest for indi­vidual titles.

“Atmos­phere-wise, it’s dif­ferent, because you’re not playing right next to your team­mates, and there’s an indi­vidual aspect to it,” Szabo said. “Nor­mally, everyone is cheering each other on. But here, you might be playing 10 courts away from your teammate. But when we had chances to cheer each other on, I think we did really well. “

Turner said that he had hoped to judge the team’s talent through this tour­nament, but couldn’t, due to injuries.

It was hard to see where we are at,” Turner said. “Our top four-out-of-five guys last year weren’t playing.”

“Our guys have to take care of them­selves and get healthy. Stay away from the bug going around campus, keeping their bodies free of injury, and being smart in practice — not pushing them­selves or over­doing it,” Turner said. “I’m happy we have 10 guys this year, because it looks like we are going to need the depth, and a lot of people are gonna get to play, whether it’s singles or doubles.”

“We took practice off today, and yes­terday in an effort to get everyone healthy, because even the guys who went to the tour­nament felt beat kind of up,” Szabo said. “We go back to regular practice tomorrow [Wednesday] until our next match, and then we are off-season. But I would argue that we practice even harder then, because we have to get ready to play every single weekend starting after Christmas break.”

Szabo said that he believes the Chargers will win the new con­ference.

I think we will compete to win the G‑MAC, and we are just chasing that goal of getting an NCAA bid. We will have to do really well against non­con­ference teams, but we are playing really well now, and the new guys are exceeding expec­ta­tions,” Szabo said. “I think we are poised to make a really good run in the spring.”

The Charges will face Indiana Tech on Oct. 3.