“If there is intel­ligent life out there, how does that change how we see our­selves?” Assistant Pro­fessor of Physics Timothy Dolch asked during the first Lyceum lunch of the year, held Sept. 19 in the nook of the Knorr Dining Hall.

Stu­dents gathered to discuss the “pos­itive fad or probable fact” of extrater­res­trial life with Dolch and Asso­ciate Pro­fessor of Physics Paul Hosmer. Over the course of an hour, dis­cussion ranged from the sci­en­tific and factual to the philo­sophical and spec­u­lative.

“If there is a warm ocean there, you have to ask whether there is bio­logical life there,” Dolch said. “We’re actually making deci­sions of financial con­se­quence based on whether there is life outside our solar system.”

Later, Dolch answered stu­dents’ ques­tions about the pos­si­bility of extrater­res­trial life in the uni­verse. Stu­dents asked a variety of ques­tions, such as why any intel­ligent extrater­res­trial beings, if they exist, have not yet made contact with humans despite the size and scope of the known uni­verse.

“This is called the Fermi paradox,” Dolch said. “If there is intel­ligent life out there, if they come to the point of being able to travel across the galaxy in a short amount of time, if they’re any­thing like us, they will try to col­onize.”

Dolch further clar­ified the Fermi paradox and why no col­o­nization has occurred. He said in the context of a uni­verse bil­lions of years old, it may take a long time to come in contact with any extrater­res­trials.

Dolch said this means that if humans make contact with extrater­res­trial life, it could be thou­sands or mil­lions of years in the future. Dolch left it up to the stu­dents to decide whether coming into contact with intel­ligent extrater­res­trial life could ever happen or if it is beyond the realm of pos­si­bility. He said there is cer­tainly the pos­si­bility of life, even if it is only small microbes under the surface of a distant moon.

“We have dis­covered thou­sands of planets outside our solar system,” Dolch said. “If you do the math­e­matics, there may be 10 billion earthlike planets in our galaxy.”

Sophomore Gregory Bon­vissuto said the most fas­ci­nating aspect of the talk was “the fact that finding extrater­res­trial life is in fact pos­sible and even probable in the future.”

“I think the chance to discuss inter­esting ques­tions over lunch with a pro­fessor embodies what we’re really here at Hillsdale to do,” junior Ellen Friesen said. “Nobody came to that lunch because it would help their GPA or enhance their resume. They came because they care about asking the hard ques­tions and seeking answers.” 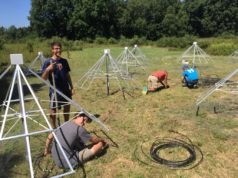 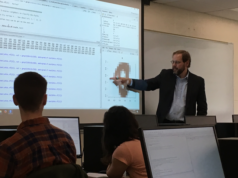