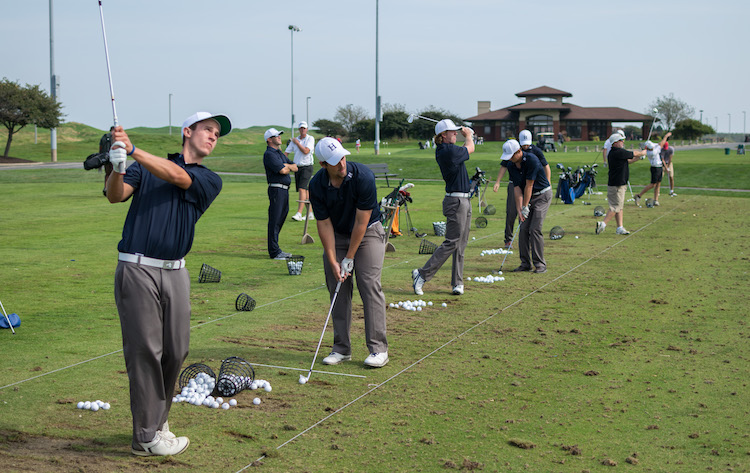 As the Hillsdale College golf team tran­si­tions to the Great Midwest Ath­letic Con­ference, the players’ focus has been on earning a spot in this weekend’s tour­nament.

Junior Joel Pietila, who made history last season with the team’s first-ever indi­vidual victory in the GLIAC Cham­pi­onship, battled a shoulder injury this off­season, but he said it hasn’t changed his mindset from putting up low scores at the team’s first tour­nament.

“The injury has been on and off since Christmas break. I had to do some makeshift therapy to keep me going throughout last season, then it started to get worse about late May, early June,” Pietila said. “I didn’t play much for about two months. I kind of chipped and putted around a little bit, but even that was a little both­ersome.”

After vis­iting the doctor and receiving an MRI and physical therapy during the summer, Pietila has decided to keep playing this season.

“MRIs came back, nothing major in terms of tears or any­thing, but there were def­i­nitely some areas of weakness and stress in some parts of my shoulder that need to be strengthened to keep it stable,” he said. “I’m gonna have to play through some pain.”

Junior Liam Purslowe is fighting injuries going into this season, too. He has back pain that has ham­pered his play.

Pietila said he and Purslowe have used push­carts because car­rying golf bags causes them too much pain.

The golf team played its qual­i­fying rounds this week to determine which golfers will play in this weekend’s tour­nament. Pietila qual­ified, despite playing only a few full rounds of golf all summer. Purslowe qual­ified, too.

“The swing isn’t where it was at the end of spring when I was playing really well, but the putting is still there and that’s been my biggest improvement throughout the last 18 months,” Pietila said. “So, that’s all good news, and hope­fully I can keep that up.”

The team added freshman Luke Girodat to its lineup this season. Girodat comes from Jackson, Michigan, where he attended Lumen Christi Catholic High School. He played high school golf with junior Henry Hitt, who is his teammate once again.

“We recruited Luke because he is a great player, a very strong student with high test scores, and overall he is a great fit for Hillsdale College,” head coach Nathan Gilchrist said.

“I knew I would be chal­lenged in both aspects, and nothing is more sat­is­fying than suc­ceeding in a tough sit­u­ation.” he said. “The one thing that I couldn’t have been pre­pared for was all the reading and writing that we are assigned reg­u­larly.”

He said his tran­sition to col­le­giate golf has already taught him a lesson.

“Most people who come to play golf not only at Hillsdale, but at most Division II and Division I schools, are probably coming from a high school team where they were the best player,” he said. “That’s an inter­esting dynamic that a dozen or more kids who are used to being the best player on their respective teams have to become accus­tomed to whatever position they fall into on their new team.”

The team retains a young, yet strong, lineup going into its first tour­nament, as it didn’t graduate any seniors last year.

“We do have a young team in age and class, but they are expe­ri­enced on the golf course. The under­classmen have played in a lot of tour­na­ments during their time here at Hillsdale,” Gilchrist said. “That, along with the seniors, pro­vides a lot of tour­nament expe­rience for most of the players on the the team.”

Gilchrist said the switch to the G‑MAC won’t change any­thing for team.

“We still play in the same tour­na­ments and against the same com­pe­tition that we have in the past,” he said. “The only change is the con­ference cham­pi­onship is against some new teams and is for­matted dif­ferent than the GLIAC’s.”

Gilchrist has decided to send Pietila, Purslowe, sopho­mores George Roberts and Ryan Zetwick, and senior Joe Torres to the team’s first tour­nament this weekend. They will play in the Al Wal­trous Memorial Invite at Saginaw Valley State on Sept. 9 – 10.

Pietila said the team can put together a winning season if they get men­tally tougher and make better deci­sions around the putting green.

“Talent-wise, we’re no dif­ferent than Grand Valley,” Pietila said. “We have the talent, we need to believe we can win, and when we see it happen things will start falling into place.”

Swingin’ with the boys: Balkan is a team leader