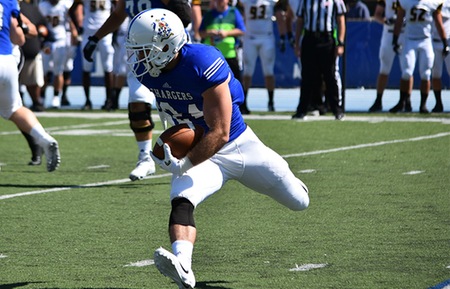 For the first three quarters of Hillsdale’s home opener last weekend, it looked as if the Chargers were headed to a dis­ap­pointing defeat against former con­ference foe Michigan Tech. However, the Chargers rattled off 21 unan­swered points in the final quarter to secure an improbable 31 – 27 victory.

The win improved their record to 2 – 0, the same mark the team held last year after two games. This is the first time since 1991 – 92 Hillsdale has begun con­sec­utive seasons at 2 – 0.

After the Chargers’ offense went 3‑and-out to start the game, the Huskies marched 64 yards to take an early 7 – 0 lead.

Hillsdale responded with its longest drive of the game, 78 yards, capped by a rushing touchdown by sophomore running back David Graham, tying the game at 7.

Graham picked up 41 yards on the ground on the first scoring drive, and ended the day with 98 yards on 13 attempts, aver­aging more than seven yards per carry.

According to Graham, great blocking was one key to his success.

“The offensive line was making the holes for me,” he said. “I kind of got in the zone and there was great chem­istry there.”

In the second quarter, the Huskies took a 14 – 7 lead with a methodical 10-play, 85-yard touchdown drive.

After a 3‑and-out and a botched punt by the Chargers’ offense, Michigan Tech took over at Hillsdale’s 10-yard line.

On 3rd-and-goal from the 1‑yard line, however, sophomore line­backer Nate Jones forced a fumble on a rushing attempt by the Huskies. Sophomore defensive lineman Nate Can­terbury recovered the ball in the end zone for a touchback with just over two minutes remaining in the first half.

Junior quar­terback Chance Stewart then con­nected with four dif­ferent receivers to move the offense into the Huskies’ ter­ritory, setting up a 38-yard field goal for red­shirt freshman kicker Joe Phillipp. The kick brought the Chargers within four points at the break.

As the fourth quarter began, Hillsdale’s seem­ingly feckless offense lined up for a 4th-and‑1 attempt from its own 36-yard line. Stewart con­verted a quar­terback sneak for a one-yard gain, keeping the drive alive.

The con­version seemed to spark the Chargers’ offense, as it moved the ball the length of the field, setting up a 1‑yard rushing touchdown by Stewart which trimmed the deficit to 27 – 17.

Junior running back Joe Reverman gained 22 yards on the ground during the drive and fin­ished the game with 35 yards on 13 carries in his first action this season. Reverman is still recov­ering from a knee pro­cedure.

“I felt pretty good. I’m still not 100% back to where I was,” Reverman said. “That’s why we’re lucky to have David Graham. He’s been playing really good and we haven’t missed a beat.”

With less than 10 minutes left in the game, Hillsdale’s defense forced a 3‑and-out to get the ball back to Stewart and the offense.

Three plays later, Hillsdale set up for 4th-and-goal from the 1‑yard line. Stewart again carried the ball behind the center, reaching the ball over the goal line for his second rushing touchdown of the game. Sud­denly, the Chargers trailed only 27 – 24 with just over three minutes to go.

“I trust myself in those sit­u­a­tions, espe­cially with [center] Danny Drummond in front of me, knowing he’s not going to get blown back, and with the guys behind me who are going to come and push me if I do get stuffed,” Stewart said. “We have great size up front.”

On its first set of downs, Hillsdale faced yet another 4th-and‑1, now with the game on the line. For the fourth time in the quarter, Stewart exe­cuted a quar­terback sneak, gaining the first down and keeping the Chargers’ comeback hopes alive.

Head coach Keith Otterbein said each of the quar­terback sneaks were called by Stewart as an audible once he got to the line of scrimmage.

“We’ve coun­seled him on what looks to do [the sneak] on,” Otterbein said. “We had a dif­ferent play called in every one of those sit­u­a­tions and based on the defensive look, he’s able to execute. When he does choose to do the quar­terback sneak, it’s been phe­nom­e­nally effective.”

Later in the drive, Graham’s second touchdown of the day gave Hillsdale its first lead of the game, with just over a minute left on the clock.

Hillsdale’s defense made one final stop as time ran out, and a remarkable 31 – 27 victory was in the books.

Stewart said despite the sizeable deficit with only one quarter left, the team remained upbeat and con­fident that it was still in the game.

“When you’re in those sit­u­a­tions, we’re not going to get 17 points right away,” he said. “We needed to slow down, get our pieces together and just chip away at it. Sure enough, it worked out.”

The 17-point dif­ference was the largest deficit the Chargers have overcome during Stewart’s three-year tenure as quar­terback at Hillsdale.

“We couldn’t make the big play we needed to in order to catch some momentum early,” Stewart said. “In the fourth quarter, people stepped up, I threw better balls, receivers caught passes, lineman blocked for a little longer, and everyone just did their job to a higher level than we had all game.”

Stewart com­pleted passes to eight dif­ferent targets in the win.

In the fourth quarter, Hillsdale’s defense held Michigan Tech to only 19 yards of offense and didn’t sur­render a first down. On the Huskies’ first of three unsuc­cessful drives in the final quarter, senior defensive back Spencer Nehls made a key tackle in the open field on a 3rd-and‑5 play that forced Michigan Tech to punt.

Nehls came up big for the defense all day long, having a hand in 10 total tackles. His efforts earned him the G‑MAC Defensive Player of the Week award.

Otterbein said Nehls deserved the honor, calling him an “unselfish” asset who is “playing with con­fi­dence.”

While the Chargers would like to see more con­sis­tency on both sides of the ball early on, they rec­ognize the impor­tance of playing in tight games.

“Having close games like that, it helps you later down the line, because you’ve been there before,” Graham said. “You’re not going to make the mis­takes you would if you’ve never been in that sit­u­ation before.”

The Chargers remain at home this Sat­urday, when they host McK­endree Uni­versity at 7 p.m. at Frank “Muddy” Waters Stadium.