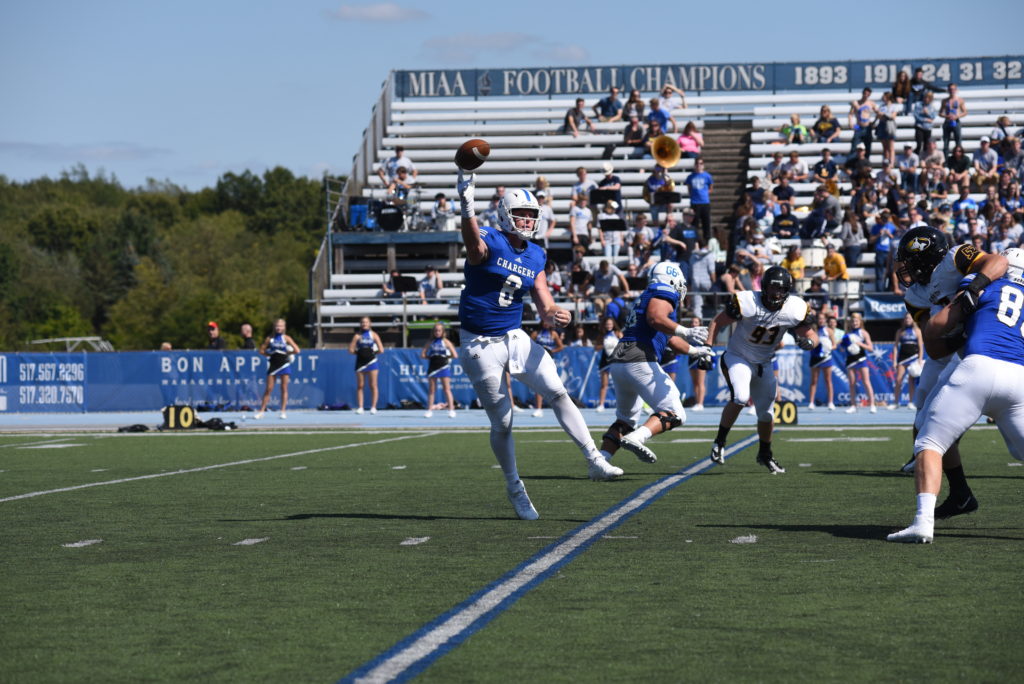 In a record-setting classic last Sat­urday, the Hillsdale Chargers lost 45 – 38 to the No. 14 Uni­versity of Indi­anapolis Grey­hounds on the road, dropping to 2 – 2 this season.

The Grey­hounds remain unde­feated and improved to No. 10 in the NCAA’s Division II football rankings after the victory. Indi­anapolis also nar­rowed the dif­ference in the all-time series against Hillsdale to one game. The Chargers are now 16 – 15 in head-to-head matchups against the Grey­hounds.

Junior quar­terback Chance Stewart com­pleted 31 of 47 passes for 485 yards, sur­passing the school’s pre­vious single-game record of 426 passing yards set by Mark Nicolet in 2007 and matched by Mark LaPrairie in 2014.

“Any time you’re able to set a record on a football team with such great tra­dition like Hillsdale, it’s always an honor,” Stewart said. “Lots of amazing efforts went into that game and just huge per­for­mances by everyone on the offensive side to help get all those yards.”

302 of those yards found the hands of junior wide receiver Trey Brock, on 12 recep­tions. That output also eclipsed a Chargers’ single-game record, pre­vi­ously held by John Haley, who racked up 268 receiving yards in a game in 2014.

Through the first three games of the season, Brock had one touchdown and 220 receiving yards. Those are by no means shabby numbers for a wide receiver, but the 2016 All-American knew he was capable of more.

“It meant a lot for me, because I struggled a bit in the first three games,” Brock said of his two-touchdown, 302-yard per­for­mance against Indi­anapolis. “It gave me a lot of con­fi­dence and set the bar high for me going into the second half of the season.”

Col­lec­tively, Hillsdale piled up 650 total yards of offense, another single-game record in the team’s 125-year history. The 2014 team pre­vi­ously held the record for total offense in a game, accu­mu­lating 611 yards on Sept. 13 of that year.

“That’s what we’re capable of,” sophomore running back David Graham said of the offense’s high-octane attack. “Even more so, we still made some mis­takes while doing that well offen­sively. We can be really good on both sides of the ball.”

The Grey­hounds bolted out of the gates, scoring on their first five pos­ses­sions of the game to build a 23 – 0 lead midway through the second quarter.

A 60-yard heave from Stewart to Brock got Hillsdale on the board in the second quarter. On the Grey­hounds’ ensuing pos­session, senior defensive lineman Matt Hall forced and recovered a fumble at Indy’s 23-yard line. The takeaway set up Graham’s first of two touchdown rushes to bring the score to 23 – 14.

The Chargers’ defense forced its first three-and-out of the game, and the offense needed only one play to score a touchdown on its third con­sec­utive pos­session.

Stewart again found Brock, this time for an 82-yard strike.

“Our offense seemed to take more shots [down the field] in the second quarter,” Brock said. “Chance did a great job trusting his receivers to make plays.”

The 82-yard reception was the longest of Brock’s col­le­giate career.

The Grey­hounds scored a touchdown on a deep pass of their own before the end of the half, increasing their lead to 30 – 21 at the break. Junior safety Wyatt Bat­dorff said sur­ren­dering big plays hurt Hillsdale’s defense in the first half.

“We would make three great plays and give up a big play, and that kills your momentum,” he said. “As soon as the defense started making a couple of plays and the offense started scoring is when we really thought we had a good chance to battle with [Indi­anapolis].”

Bat­dorff led the Chargers with nine total tackles in the game, and leads the team with 36 total tackles this season. He credits the defensive unit as a whole for his success this year.

“Everyone is doing their job,” he said. “Everyone is getting their assign­ments and I’m just there to make the plays I need to make.”

On Hillsdale’s second play from scrimmage in the third quarter, Graham broke away from the Indi­anapolis defense for a 74-yard touchdown run. He’s reached the end zone in all four games this season, and has six touch­downs to begin the year.

“The end zone is right there, and you’ve got to get in,” Graham said of his knack for scoring touch­downs. “The other guys feel that way, too — they’re all hungry to get in the end zone. We just want to score whatever way we can.”

The Chargers took a 31 – 30 lead in the third quarter, thanks to a field goal from red­shirt freshman kicker Joe Philipp.

A 74-yard kickoff return by the Grey­hounds set up a touchdown that handed the lead back to Indi­anapolis.

In the fourth quarter, Stewart’s third rushing touchdown of the season tied the game at 38.

The Chargers’ defense con­tinued its season-long fourth-quarter dom­i­nance, allowing just three first downs in the final quarter. Hillsdale’s offense had more than one oppor­tunity to take the lead late in the game, but two inter­cep­tions doomed the Chargers’ chances at com­pleting what would have been a remarkable comeback.

With less than seven minutes remaining, Stewart led Hillsdale into the Grey­hounds’ red zone. On second down from the 13-yard line, he fired a pass that bounced off the hands of senior wide receiver Timmy Mills. The ball ric­o­cheted to an Indi­anapolis defender, who returned the inter­ception 93 yards for the game-deciding score.

“That was a bad break,” head coach Keith Otterbein said. “We had been driving the ball, and knowing what I know now I would have been more con­ser­v­ative and run the ball. We probably could have got the clock down a bit more.”

The defensive touchdown made it 45 – 38, and the Chargers’ last-ditch attempt at tying the game was foiled when the Grey­hounds jumped a route to intercept Stewart for a third time in the game.

Despite the dis­ap­pointment of a second con­sec­utive loss, the Chargers said they dis­played their tenacity by coming back from a 23-point deficit to play down to the wire against a nationally ranked opponent.

“It shows other teams that we’re not going away,” sophomore line­backer Dan Shanley said. “No matter what we get thrown at us, we’re not going to roll over. That’s just not what we do.”

Shanley fin­ished the game with six total tackles, one tackle for loss, and a pass broken up.

“They’re tough kids. Men­tally and phys­i­cally tough,” Otterbein said of his team. “We were knocked on our heels early, but you just play the next play. I’m really proud of them for that.”

All four of Hillsdale’s games this season have been decided in the fourth quarter, and the margin in all four games has been one score.

“I love Home­coming,” Bat­dorff said. “I think it’s a great atmos­phere to play in. The team as a whole is really excited to get the new con­ference started.”

Shanley echoed the excitement for the weekend ahead.

“We’ve kind of got a chip on our shoulder from the last two games,” he said. “Home­coming is a big game for us, so we’re playing with an added edge. It should be an exciting game.”