When I popped out of the Smith­sonian Metro station onto the National Mall last Sat­urday, it seemed everyone in Wash­ington, D.C. had become an activist for the day.

Right outside the station sat a band­stand fes­tooned with American flags. A couple hundred feet away, a Ford F150 was hitching up to a band­wagon dec­o­rated with a miniature Statue of Liberty and the giant white letters “TRUMP.” Bystanders waved Make America Great Again signs. A sign outside the Metro pro­claimed in red, black, and white letters “NO KKK, NO Antifa, NO Racist USA. Patriots Unite!”

A Run DMC cover of Aerosmith’s “Walk This Way” played over the loud­speaker, perhaps in a subtle attempt to emphasize racial healing.

When the F150 started dragging the Trump band­wagon toward the stage, about 200 sup­porters wearing MAGA hats or oth­erwise patriotic attire rushed forward, smart­phones held high in the air, not really looking at any­thing, but eagerly recording the patriots uniting.

A woman in the crowd pointed to me — the one guy not raising his smart­phone — and shouted “We will not be stopped!” repeatedly.

When the band­wagon did stop, a man with a southern accent asked if all the young­sters (“We have a lot of young­sters,” he said) would please lead the crowd in reciting the Pledge of Alle­giance.

As I walked away from the rally toward the Wash­ington Mon­ument, a man covered in tattoos called to me.

“Hey, do you know where ICP is playing?”

“Oh they’re down at the Lincoln Memorial,” I said, pointing down the Mall toward my des­ti­nation. “They speak at four and do the concert at nine.”

“Is that the Trump thing up there?” he said, pointing in the opposite direction.

“Dang — looks like I’ll be hopping back and forth.”

As he walked away, I noticed a tattoo of a dread­locked hatchet-wielding man stamped on his elbow, marking him as a Juggalo, a fan of the Detroit-based rap duo The Insane Clown Posse — which meant he had come to D.C. for a much more inter­esting rally.

While Trump sup­porters rallied, about 2,000 Jug­galos gathered in front of the Lincoln Memorial to protest the FBI’s 2011 clas­si­fi­cation of ICP fans as a “loosely orga­nized hybrid gang,” in a protest dubbed The March of the Jug­galos by it sup­porters. According to the FBI’s report, Juggalo activ­ities include “simple assault, per­sonal drug use and pos­session, petty theft, and van­dalism.” Since the clas­si­fi­cation was enacted, law enforcement offi­cials gained the dis­cretion to regard anyone sup­porting ICP as a gang member.

While the clas­si­fi­cation has allowed law enforcement to crack down on vio­lence from people who happen to be Jug­galos, it extends an enormous amount of leeway for offi­cials to decide what a Juggalo gang member really is. Any­thing that dis­tin­guishes someone as an ICP fan — whether it be clown face paint, a hatchet man tattoo, a 20th-anniversary copy of the album “The Great Milenko” — can now be con­sidered gang para­pher­nalia and cause for police inves­ti­gation, mil­itary dis­charge, or child pro­tective service inter­ven­tions, in the case of Jug­galos who happen to be parents.

According to Kevin Gill, a rep­re­sen­tative of ICP’s record label, Psy­cho­pathic Records, the Juggalo march was intended to prove that the Jug­galos are not gang-like; they’re just a big family of misfits.

“Our hope is that we can show the FBI and the world the truth about Jug­galos and get the FBI to remove this insane gang clas­si­fi­cation,” he said.

A noble statement, but “the truth about Jug­galos” is hard to define pre­cisely. While they do call them­selves a family — they chanted the word for five hours —  they tend to act more like a dys­func­tional family, dis­agreeing on every­thing except a common love for ICP, Faygo, and their social status as untouch­ables.

A red-headed Juggalo from the metro Detroit area who intro­duced himself as Bob gave me a 24 oz. bottle of his favorite flavor of Faygo, Cotton Candy.

“I have to drive an hour to get it back home,” he said.

Later he led in a group of Jug­galos in “STAFF” T‑shirts bearing about 20 boxes of Little Caesars pizza and several back­packs full of Cotton Candy Faygo.

I ran into Bob again while inter­viewing Jason Fox, a Juggalo min­ister from Vir­ginia Beach. Fox claimed Jug­galos were more than family, they were a spir­itual broth­erhood in Christ.

“The down­trodden have found a way to come together through the uni­versal lan­guage of music and pry them­selves from the darkness and reach for the light,” Fox said.

At this point, Bob noticed Fox’s Roman collar and romped over to our con­ver­sation. He turned to his friends and declared his sol­i­darity with all Jug­galos.

“I will take a picture with this Jesus guy, even though I’m an atheist,” he said. “Because you’re a Juggalo too — how’s that for family love?”

Fox posed for a picture.

“Jesus loves you,” he said.

Else­where, various political out­liers were trying to make the Juggalo March a political movement. A rep­re­sen­tative of the Demo­c­ratic Socialists of America was handing out flyers with the slogan “Faygo Not Fascism.”

“It’s just ridiculous that the FBI would classify the Jug­galos as a gang,” he said. “The FBI just wants to harass people.”

He pointed up the Mall, indi­cating the MAGA rally.

Down in front of the Reflecting Pool, a Juggalo wearing a Cthulhu mask was smoking a blunt. Another walked back and forth across the steps, holding a sign that read “FBI = Foolish Bunch of Inbreds.” A friendly Faygo spray battle erupted in front of the now-empty pizza boxes.

A girl with a New Yorker tote bag slung over her shoulder took a selfie in front of the whole scene.

A stranger asked me for a cig­a­rette. I asked him if he was a Juggalo.

“I’m not a Juggalo, man, but there’s nothing about these people I can’t support,” he said. “I was just walking through the Trump rally and it was, you know — a lot of old people with sunsets for profile pic­tures, shouting about ‘sadistic men dressing up as women.’ But man, this is like nothing I’ve ever seen. They’re shouting ‘Family! Family! Family!’ I think they mean it.”

Whether or not the Jug­galos meant it, when their leaders, Violent J and Shaggy 2 Dope, took the stage to address the crowd, their joint speech pro­vided no answer to the only question that really mat­tered: If not a gang member, then what is a Juggalo?

Violent came out with a Mac laptop and shouted “Speech time!” As he was scrolling through Microsoft Word to find his place in the speech, he acci­dently closed the doc­ument. He cursed at the com­puter, but Shaggy helped him fix it. Shaggy’s son ran out and hugged his father’s leg.

When the two finally started speaking, Violent told the crowd the Jug­galos were in the right with regards to a legal issue.

“The holy creator is patting us on the head right now,” he said.

How nice. But Violent quickly undercut the sen­timent with a joke about how this God pat was for a job well done; it was not an uncle-that-touched-you pat. The crowd laughed. Someone sprayed me in the face with Faygo.

After calling himself the Martin Luther King Jr. of the music industry, Violent told the Jug­galos that gang vio­lence is not part of the Juggalo lifestyle.

“Don’t be the thugs, the hoodlums, the vandals they say we are — while they’re looking,” he said.

Violent and Shaggy passed the micro­phone back and forth for about half an hour, making crude jokes and com­paring them­selves to great civil rights leaders. They even carted out The Dark Car­nival, their quasi-the­o­logical attempt at describing a path of sal­vation for Jug­galos.

Violent wrapped it up with a dec­la­ration.

And it almost seemed true. But as I was walking away, I saw the DSA rep­re­sen­tative again, dis­trib­uting indoc­tri­nation lit­er­ature to the Jug­galos making their way over to Con­sti­tution Avenue for the march. I ran into a con­tingent of Antifa members — dressed in all black — fresh from their protest behind the White House. They looked like ISIS insur­gents.

“We’re here in sol­i­darity against police over­reach,” their flag bearer said.  “We’re with anyone who is against them.”

The march com­menced, and I walked alongside it, trying to film its scope. I picked out Violent in the crowd, walking among the Jug­galos, sans body­guards. He was smiling and joking with other face-painted marchers.

As I was filming, a dead-eyed Jug­galette put up her middle finger and started blocking my camera, trying to force me away from the crowd.

Andrew Egger ’17, who was also cov­ering the march for The Weekly Standard, put his hand on her shoulder.

“Excuse me, is there a problem?” he said.

There was a problem — and there still is — but it’s much more than any one of us can hope to solve. 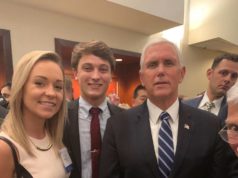