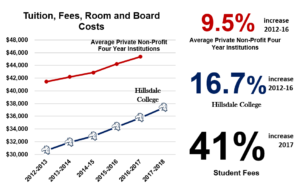 Hillsdale College’s price tag jumped to an all-time high this fall, with costs increasing more than they have in the last eight years.

“Hillsdale tuition is $25,540 — low com­pared to similar insti­tu­tions,” Chief Admin­is­trative Officer Rich Péwé said in an email. “This means even a 2.5 percent increase at another similar insti­tution, with much higher tuition, is much more money.”

Flannery said the fee helps with main­te­nance of the college’s facil­ities. It also appears as a sep­arate line item on stu­dents’ online bill statement.

“One of the good things is that it makes things trans­parent,” Flannery said. “It lets student know how much of their money goes towards these types of things.”

Flannery added that the new fee was not being used toward con­struction of Christ Chapel.

“There’s a finite amount of schol­ar­ships,” he said. “To keep that in control, we made the decision to not tie merit awards to a per­centage. If a student has a $15,000 merit award, when tuition goes up by 3.5 percent, essen­tially the value of their schol­arship goes down.”

While returning stu­dents may face aid packages with lesser value, Moeggenberg said incoming freshmen are receiving more merit awards than ever before.

“We’re receiving stu­dents with strong aca­demic back­grounds, and we’re awarding more and more merit monies,” he said. “The average financial package for this year’s freshmen and last year’s freshmen exceeded what we had given in the past.”

According to Péwé, the college bud­geted to increase financial aid funds for five years at an annual rate of 9 percent.

Still, for stu­dents such as sophomore James Millius, the fixed system increases the financial burden of attending the college.

“Many others and I rely on financial aid to go here,” he said. “When costs go up without an increase in financial aid, it affects a lot of us.”

Péwé added that when the school raises its price, it creates addi­tional chal­lenges for the college, as well.

“Every tuition increase is actually a burden, not just revenue, because we have to supply pro­por­tion­ately more financial aid to meet the addi­tional costs — a financial blessing and a curse,” he said.