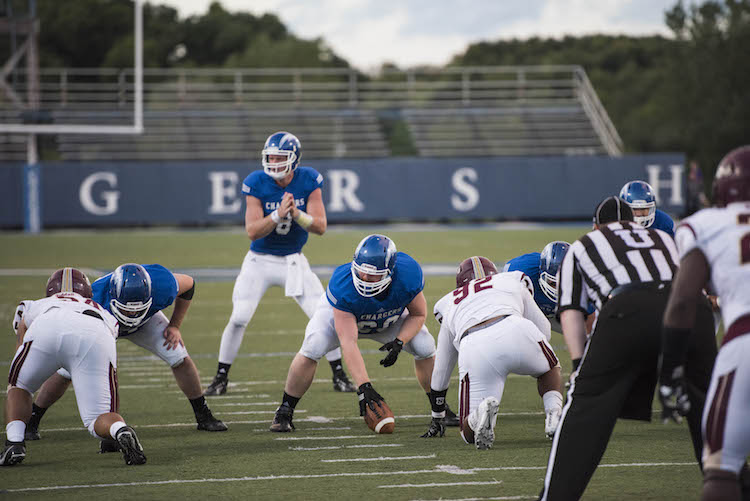 The Hillsdale College football team began its first season in the Great Midwest Ath­letic Con­ference with a 19 – 11 win in Erie, Penn­syl­vania, on Sat­urday.

In the first meeting between the two teams in nearly 10 years, the Chargers defeated Mer­cy­hurst Uni­versity, improving their all-time record to 8 – 3 against the Lakers.

In what could be described as a defensive struggle, neither team’s offense was able to find enough con­sis­tency to swing the advantage clearly to one side or another.

The Chargers gained 17 first downs to the Lakers’ 16. Hillsdale netted 368 total yards of offense, which was just 20 more than Mercyhurst’s 348.

Hillsdale also edged the Lakers in time of pos­session by a slim margin, con­trolling the ball for just over 31 of the 60 minutes.

Neither team was par­tic­u­larly effi­cient on third downs — Hillsdale con­verted five of 14 third-down oppor­tu­nities, while Mer­cy­hurst con­verted just two of 12.

Halfway through the fourth quarter, the Chargers led 19 – 11, but the sta­tistics were nearly split down the middle. In the end, a defensive stand at the goal line made the dif­ference.

With less than five minutes left in the game, the Lakers drove the ball more than 60 yards to set up 1st-and-goal with a chance to tie the game.

As it had all game, Hillsdale’s defense came up big.

On 4th-and-goal with the game on the line, sophomore cor­nerback Jason McDo­nough inter­cepted Altavilla’s pass with less than a minute left on the clock. The Chargers’ offense only had to kneel the ball twice to put the fin­ishing touches on the season-opening victory.

“I give all the credit in the world to the defense,” junior quar­terback Chance Stewart said. “They kept us in the game the whole day. It was an ugly win, but the defense came up big for us. Winning on the road in college football is hard, so anytime we can get a win, we’ll take it.”

The Lakers got the ball to begin the game, taking a 3 – 0 lead after a 10-play, 72-yard opening drive. The Chargers responded with three points of their own on their second drive of the afternoon. The field goal was red­shirt freshman Joe Phillip’s first career col­le­giate points.

Early in the second quarter, the Lakers set up for a 24-yard field goal that would have given them a 6 – 3 lead. Instead, senior defensive back Spencer Nehls blocked the kick, keeping the game square.

The momentum seemed to shift in Hillsdale’s favor indeed, as the game’s first touchdown came toward the end of the first half, when Stewart con­nected with junior wide receiver Trey Brock for a five-yard score, putting the Chargers ahead 9 – 3.

Stewart’s first touchdown pass of the season com­pleted Hillsdale’s longest drive of the afternoon, a 12-play, 79-yard sequence. The quar­terback fin­ished the game with 198 passing yards, com­pleting 17 of 33 attempts, along with one touchdown and one inter­ception. Despite the final score, he was under­whelmed with the offense’s per­for­mance as a whole.

“We never really got into a rhythm,” Stewart said of the offense. “When I picture our offense, I picture more than 19 points a game.”

Phillip added another field goal seconds before halftime to put the Chargers ahead 12 – 3. The Hillsdale native fin­ished the day 2‑for‑2 on field goals and 1‑for‑2 on extra-point attempts.

Graham fin­ished the day with 84 yards on 18 rushing attempts and caught two passes for 36 yards. Otterbein was pleased with the sophomore’s per­for­mance.

“There’s certain guys that get the game and under­stand the game, and Graham is a natural football player,” he said.

Otterbein went on to say Graham would still have a role in the offense when 2016 hon­orable mention all-GLIAC junior running back Joe Reverman returns from injury later this season.

The scoring drive was high­lighted by a 52-yard com­pletion from Stewart to Brock on a 3rd-and‑6, which brought Hillsdale’s offense into the Lakers’ red zone.

“He really helps to stretch the field,” Stewart said of Brock. “Teams have to keep an eye on him at all times, so it allows guys like Timmy Mills and Austin San­dusky to also get open.”

The 2016 hon­orable mention All-American wide receiver picked up where he left off last season, hauling in nine passes for a total of 124 yards, along with his second-quarter touchdown.

Mer­cy­hurst then responded with a touchdown drive of their own. Altavilla con­nected with Lakers’ wide receiver Brad Nowak for a 32-yard strike and a two-point con­version to trim Hillsdale’s lead to 19 – 11.

Neither team scored in the final quarter. Two drives before McDonough’s game-sealing inter­ception, the Lakers failed to convert a 4th-and‑1 attempt at the Chargers’ 35-yard line, turning the ball back over to the Hillsdale offense.

The Chargers return to town this weekend for their home opener on Sat­urday, Sept. 9 at 1:00 p.m. They’ll host Michigan Tech Uni­versity, which is also 1 – 0 on the season.

“They’ve always been a physical, tough, hard-nosed football team,” Otterbein said of Michigan Tech. “They’ll want to establish the run, they’re good at play-action, and they’re really good at picking plays to take shots and go deep and chal­lenge you that way.”

The Huskies are a familiar opponent, as they are former con­ference rivals with the Chargers when both schools were part of the Great Lakes Inter­col­le­giate Ath­letic Con­ference. Last Sep­tember, Hillsdale defeated Michigan Tech, 51 – 24.