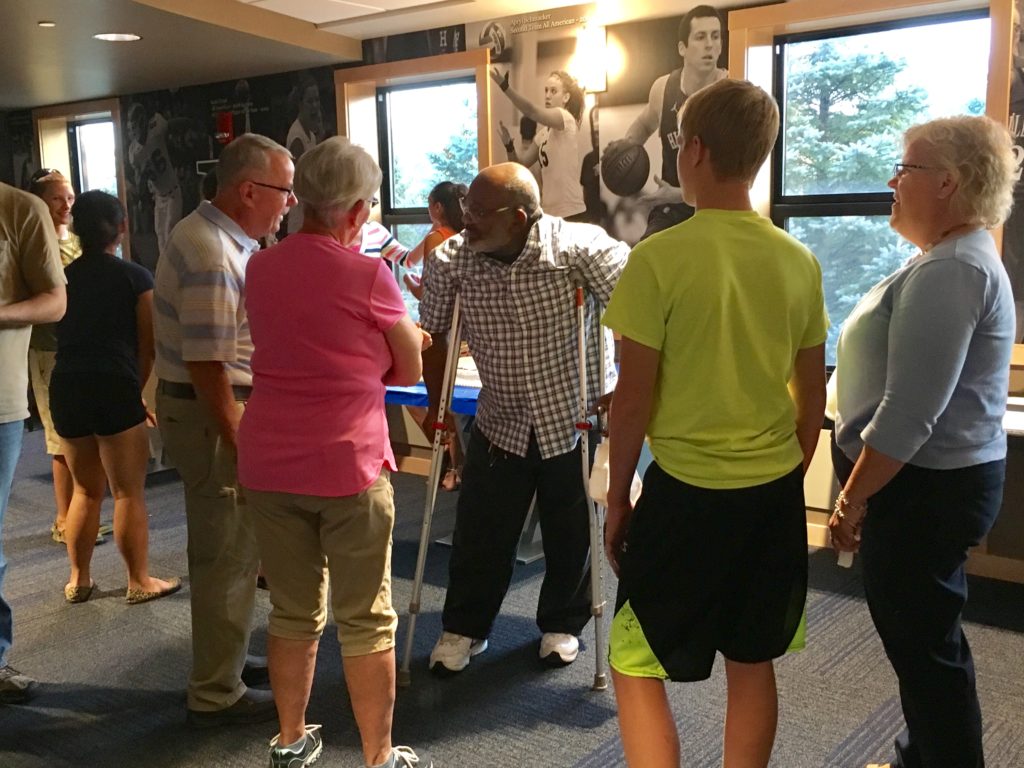 Senior Master Brian Anderson is 60 years old, and 40 of those years have been spent teaching taek­wondo at Hillsdale College.

During that time, Anderson has shown ded­i­cation not only to the art of taek­wondo but also to his stu­dents.

Anderson took up Judo in high school, prior to coming to Hillsdale as a student in 1975.

“I was watching a lot of the martial arts movies the summer before I came to Hillsdale College, and when I got here, one of the seniors, Ronny Parker, a blue belt in taek­wondo, told me about Tae Park class, which was for a credit. I said I’ll try it for a semester and see how that works. A semester and 42 years later,” Anderson said, laughing.

Only two years after beginning taek­wondo, Anderson turned into a teacher of the the dis­ci­pline, because the original teacher never showed up to class.

His love for the art and his stu­dents is evident. Nearly every student who walks past Anderson says hello, and Anderson knows and greets each one of them in return.

“He is very loyal. He loves what he does and you can see that in the way he teaches,” senior black belt Hans Noyes said.

According to Anderson’s stu­dents, you don’t have to spend much time with him to be impacted by his teaching and passion. Junior Kristin Freeman has been attending his classes for three weeks and she said she has already noticed improve­ments in her daily life.

“I feel very cen­tered and one-minded in the fact that I want to get stuff done and stay focused,” she said.

Junior Madeline Gish is in her third year under Anderson’s teaching.

“I know that a lot of my tech­niques have improved since I’ve gotten here. He has a lot of prac­tical expe­rience using his skills,” she said. “I love it. I couldn’t imagine myself doing any other sport.”

Taek­wondo is not just a physical art, and Anderson takes that very seri­ously.

Anderson said his favorite part of teaching is working with younger kids.

“They are so easy to mold into a pos­itive figure,” he said. “They enjoy life and have such an inno­cence about them. I really enjoy teaching a person what to do in a crisis sit­u­ation.”

Anderson not only said he enjoys teaching, but he showed it, too, excitedly demon­strating how to use a plastic bag, a phone and a pen as defensive resources. He doesn’t take his job lightly, nor does he take for granted the abil­ities he’s been given.

“I like giving some­thing back to the people. I was given a gift, so like to share,” he said. “God didn’t intend for me to die without sharing, so I want to share this gift as much as I can.”

Anderson offered a few pieces of advice to stu­dents.

“Learn some type of self-defense, and learn how to ver­bally com­mu­nicate your feelings. This helps de-escalate a sit­u­ation. Just talking can get you out of a lot of stuff,” he said. “Don’t put yourself in a sit­u­ation you can’t get out of. Your body will tell you things that you won’t hear because you just want to have fun. You need to listen to what that little guy is saying on your shoulder. Under­stand you.”

In addition to teaching taek­wondo, Anderson is a football and track-and-field alumnus of Hillsdale College. He went on to play as a running back for the Kala­mazoo Cougars, a semi-pro football team. He is also just a few hours short of his masters in art. He has taught per­sonal defense and safety classes, trained at the department of cor­rec­tions in Lansing, and trained EMTs. Anderson also plays in a blues band, right alongside Parker, the man who intro­duced him to taek­wondo 42 years ago.