A botanist, a geneticist, a physicist, and a Green Beret walk into a 636-square foot sim­u­lation space capsule. It may sound like the beginning of a joke, but it really hap­pened to Tim Evans, an asso­ciate pro­fessor of biology and director of the herbarium at Grand Valley State Uni­versity.

Tuesday night, Evans spoke at Hillsdale about his expe­rience in National Aero­nautics and Space Administration’s Human Explo­ration Research Analog, HERA. He spent 45 days in the spring at Johnson Space Center in Houston, Texas, living in an iso­lated, con­trolled building meant to sim­ulate a mission to Mars.

“This is like a space camp on steroids,” Evans said. “The purpose is to get people to Mars and back safely.”

To do that, NASA tests indi­viduals with an “astronaut phe­notype” on Earth in a sim­u­lated space explo­ration envi­ronment in order to study the effects of sleep depri­vation and develop coun­ter­mea­sures against it.

Evans applied to NASA’s astronaut can­didate program twice in the 1990s but was rejected both times. After raising a family, he decided to give NASA one last try nearly two decades later and applied to HERA.

“I didn’t think I would get a phone call,” he said. “There were certain tech­nical skills they were looking for.”

After a few more phone calls, ques­tionings, health screenings, and lots of blood draws and psych eval­u­a­tions, one thing led to another and Evans was accepted to the program.

He spent his time on the mission losing sleep, eating healthy foods, and getting minimal exercise.

“They wanted us under a micro­scope,” he said. Its purpose was to develop coun­ter­mea­sures to potential issues future astro­nauts would face on a trip to Mars and back. Every­thing was mon­i­tored, recorded, and mea­sured. They took surveys as many as 30 to 40 times per day. The crew even had to take samples of their urine and fecal matter, which were then com­pared to those of astro­nauts in the Inter­na­tional Space Station.

The HERA crew members were limited on the number of calories they could consume in a day and the number of hours they were allowed to sleep. Evans said there were no naps or caf­feine allowed, and par­tic­i­pants got only five hours of sleep per night.

“It’s not sus­tainable,” Evans said. “Sleep is huge. Traits are amplified with sleep depri­vation.” For example, someone who is already sar­castic will become even more sar­castic, he said.

Evans said the effects of sleep depri­vation bled into the team’s social dynamics. By the end of the trial, Evans said the crew was “still smiling, but some of those smiles were a little forced.”

The whole mission lasted 45 days. Those days were planned out intri­cately, and each crew member had their own schedule to follow, Evans said. Some of the crew’s activ­ities included looking for damage on the ISS, landing a small plane at a docking station on Mars, and taking a flight to an asteroid, all through the lenses of virtual reality goggles.

Evans recounted a time when he was in a sim­u­lated flight and his objective was to take a mea­surement and test a sample of an asteroid. Some­thing went wrong with his con­troller, similar to a video game con­troller, and he found himself hurtling into sim­u­lated outer space.

Evans also recalled the food eaten during the mission. The crew ate the same food as the ISS astro­nauts. They were only allowed to consume the minimum calories they needed to survive based on their minimal meta­bolic rate. This, however, left Evans con­stantly hungry, and the food wasn’t always tasty.

“We got tired of cream spinach,” Evans said. “Cream spinach really gets old after a while.”

On the last day of the mission, he said he decided to dis­regard mission control’s planned meal and ate Turkish fish stew, his favorite food during the mission.

To escape boredom, the mission par­tic­i­pants played card games, watched movies, and had Hawaiian-shirt Fridays. Evans even took up origami.

“That kept me busy for a couple after­noons,” he said.

He also got to use botany knowledge while on board when he grew petunias and sus­tained them for an entire life­cycle.

When the mission finally came to an end, Evans said he had learned a lot from his expe­rience. Some­thing espe­cially striking was the “mind-numbing” quality of the sim­u­lated trip home from Mars — that’s going to be hard for real mis­sions, he said.

“I’d be inter­ested in looking into it more,” she said. “It’s the best lead-up we’re going to get to actual space mis­sions.”

I always wanted to go to space camp. I exceed the height requirement for this, though — my dreams have been dashed.” 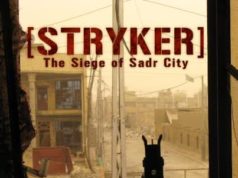 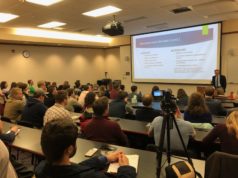