“The American people are weary of war without victory. Nowhere is this more evident than the war in Afghanistan. The longest war in American history: 17 years,” Pres­ident Donald Trump said in a speech on August 21st, piquing the interest of anti-war Amer­icans across the political spectrum.

Trump con­tinued, however, openly admitting to flip-flopping on the issue of foreign inter­vention and promising to increase troop count in the con­tentious nation. When exam­ining the his­torical record, it’s clear to most Amer­icans the out­dated policy of added force is not the appro­priate solution to Afghanistan and the ter­rorism problem.

On campus, though, the dif­ference of opinion is stark. “At this point, I’m going to trust the admin­is­tration. They know more than I do,” Dr. Paul Moreno said regarding Trump’s decision to broaden the war effort.

As a pro­fessor of U.S. con­sti­tu­tional history, Dr. Moreno also believes there are no legal issues with the administration’s decision, describing the power of a post‑9/11 pres­ident to respond to an attack upon the United States as “unques­tioned” and “not requiring a dec­la­ration of war.” While this is true, al-Qaeda and the Taliban, the two fac­tions in question, present remarkably low levels of danger. It’s been nearly 16 years since al-Qaeda allegedly attacked the U.S. and the Taliban has never threatened the American homeland. The two parties also have vastly dif­ferent goals and objec­tives. Al-Qaeda is a mil­itant group that has ded­i­cated itself to opposing the United States in any way pos­sible. On the other hand, the Taliban is a party of con­ser­v­ative Islamic fun­da­men­talists vying for control of their home country.

“I think the ultimate goal should be… regime change [of the Taliban],” Dr. Moreno said. He also sug­gests “installing a gov­ernment that is at least not a threat to the United States.” This idea rep­re­sents an enduring and per­vasive mis­un­der­standing among many Amer­icans.

The Taliban has never made a legit­imate threat to this country and even con­demned the 9/11 attacks the day after they occurred. The only indictment leveled against the Taliban is that they were “har­boring ter­rorists” — an accu­sation that’s applicable to plenty of coun­tries. The only vio­lence against the United States com­mitted by the Taliban came after its aggression in the Taliban’s own sov­ereign nation.

Trump also attributed a big part of the strategy overhaul to “a shift from a time-based approach to one based on con­di­tions.” He gave vague descrip­tions of those con­di­tions, artic­u­lating their “clear def­i­n­ition” as “attacking our enemies” along with “crushing al-Qaeda” and “pre­venting the Taliban from taking over Afghanistan.”

A policy this ambiguous has dan­gerous impli­ca­tions. The lack of a clear goal can cause the U.S. to overstay even more than it already has, exac­er­bating the ter­rorism dilemma.

Another fun­da­mental aspect of this issue is under­standing the nature of ter­rorism. Why do ter­rorists hate the United States? The answer is not as obscure as one might think. In 2004, George Bush com­mis­sioned his Sec­retary of Defense, Donald Rumsfeld, to produce an analysis of the issue. Rumsfeld reported on his findings: “Muslims do not ‘hate our freedom,’ but rather, they hate our policies.”

“American direct inter­vention in the Muslim world has para­dox­i­cally ele­vated the stature of and support for radical Islamists, while dimin­ishing support for the United States to single-digits in some Arab soci­eties.” He further explains how U.S. support for tyrannies in the region like Saudi Arabia and the general failure of war efforts in Iraq and Afghanistan have also con­tributed to the sys­temic hatred.

Amer­icans simply need to listen to the Muslim community’s message. When al-Qaeda declared war on the west, Osama bin-Laden out­lined three key griev­ances against the United States: its per­petual occu­pation of the lands of Islam, the con­se­quential deaths of many Muslims civilians, and our unques­tioned support of Israel regardless of the atroc­ities they commit.

In a 2004 speech to the American people, bin-Laden spoke of  “bleeding America to the point of bank­ruptcy.” He’s been fairly suc­cessful, too. Esti­mates have put 21st century war efforts in the Middle East upwards of $10 trillion, fac­toring in troop healthcare expenses, veteran aid, and interest on war loans. These wars have caused America’s deficit expansion and national debt crisis.

In the same speech, bin-Laden makes a pow­erful statement, offering advice that the U.S. would be wise to heed. “Your security is in your own hands. Every state that doesn’t play with our security has auto­mat­i­cally guar­anteed its own.”

Addi­tional troops are not the answer to Afghanistan. If the United States is looking to defeat Islamic extremism, it only needs to pay attention to the glaring evi­dence: our inter­vention and vio­lence moves peaceful Muslims towards rad­i­calism. If the U.S. con­tinues to escalate wars in the middle east, it will be greeted with still greater oppo­sition.

Cal Abbo is a freshman studying the liberal arts. 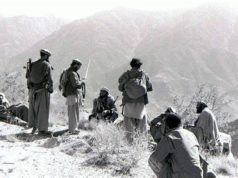 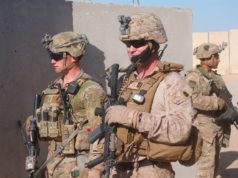 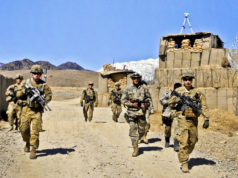 America should bear all sacrifices for victory in Afghanistan