Juniors Randi Block and Lauren Barlass said they don’t con­sider them­selves political people. But when they heard about the March for Science taking place in Ann Arbor on Sat­urday, they decided to check it out for them­selves.

“We read the whole mission statement, and we were curious,” said Block, a biology major. “We didn’t go with signs and all that stuff; we were inter­ested in seeing how it would play out.”

The Ann Arbor event was one of many coor­di­nated marches across the country on Sat­urday, as con­cerned cit­izens gathered to cel­e­brate science and to protest a federal admin­is­tration they see as dan­gerous to science’s further advancement.

Upon arriving, Block and Barlass said they were encouraged by the former and dis­ap­pointed by the latter.

“It was cool to see some of the tenets were bringing science and com­munity together,” said Barlass, a bio­chem­istry major. “There were a lot of people there who were local science teachers, things like that — just everyday people standing together for science. But there were a lot of people that I don’t know if they were there truly for the science — there were def­i­nitely a lot of signs that were just anti-Trump or even anti-Chris­tianity.”

Vis­iting Lec­turer of Biology Angelica Pytel, who also attended the Ann Arbor rally, said despite the neg­a­tivity, the main focus of the rally was science’s pos­itive con­tri­bu­tions to society.

“There was some of that bashing, but you’re going to have that any­where,” Pytel said. “Most of them were just pro­moting the impor­tance of science and science lit­eracy, just sci­en­tists coming together to support one another.”

Part of the point of the rally was to encourage sci­en­tists to get more involved in pol­itics, Pytel said, but with an emphasis on making a pos­itive con­tri­bution.

Assistant Pro­fessor of Biology Silas Johnson attended the March for Science, as well. But instead of trav­eling to Ann Arbor Sat­urday morning, Johnson drove through the night to attend the main rally on the National Mall in Wash­ington, D.C.

“It attracted a lot more people like myself,” Johnson said. “I have col­leagues around the country at various other col­leges and uni­ver­sities who traveled out there; there were a lot of pro­fes­sional sci­en­tists who went there.”

Johnson agreed with Pytel that, despite some anti-Trump sen­timent, the general mood of the protest was pos­itive.

For their part, Block and Barless said they are just as com­mitted to fighting the neg­ative stereo­types on display at the march as they are to sup­porting the science cel­e­brated at them. 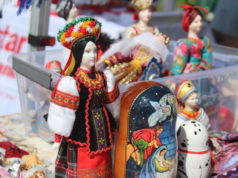