Enactus is beginning to pull loose ends of its Charger X ride-sharing project together and expects to be in business by the fall semester.

Issues with the money wire trans­ferring to an app developer in India delayed the entre­pre­neurship club, which ini­tially had pre­dicted a launch date of mid-April. The stu­dents had to add a few weeks for the college to approve the $3,000 transfer, and the developer would not start working on the app in earnest until receiving the money — which still is in neither his account nor Enactus’.

“The money’s floating at the moment,” team member senior Michael Ferrell said. “There was an issue with the bank, and it has to bounce back to us before we can resend it.”

He is tracing the funds right now and said he antic­i­pates the semester will end before he can recover and resend the money.

“It’s kind of out of our hands at this point,” team member senior Rachel Moore said.

Co-pres­ident senior Tucker Phillips said once the developer receives the money, it will take him 40 days to create a working app — meaning he will likely finish during the summer.

Charger X is the entre­pre­neurship club’s Uber-like program that would connect stu­dents in search of rides in Hillsdale, in the sur­rounding area, and to the Detroit Met­ro­politan Airport with other stu­dents reg­is­tered to drive.

But the team has a few steps before it can offi­cially launch the app, Ferrell said. It must iron out the bugs, a multi-week process involving a mini-launch and com­mu­ni­cation with the developer, who is con­trac­tually obligated to fix bugs for up to a year.

Team members also need to open a bank account for any revenue made from the app.

“After this project is started, we should be able to make enough money to start other projects,” Co-Pres­ident senior Vic­toria Tran said.

The team ran into another road­block a month ago, when the state of Michigan enacted a new law placing reg­is­tration fees on ride-sharing com­panies. These fees would have been pro­hib­itive for a small enter­prise like Enactus, so Phillips said the club applied for 501(c)(3) non­profit status. This appli­cation process can take several months, Phillips said.

In the meantime, Enactus can operate as a non­profit.

“Even if it’s next year, we’re going to stay in touch with the new project leaders,” she said. “We might even be able to use the app for home­coming.” 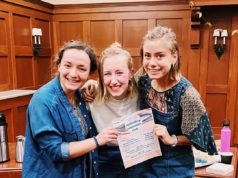