When Director of Strategic Ser­vices Anthony Manno ’13 grad­uated and began working as director of student activ­ities five days later, people told him he had big shoes to fill.

But Manno said Assistant Dean of Men Jeffery “Chief” Rogers told him, “You’ve got your own shoes to fill,” and he thought, “Yeah, I do, and they’re probably bigger than Amanda Bigney’s anyway.”

Three years and four job titles later, Manno will join his father in the family business, Manno Clothing & Tai­loring Inc., an upscale men’s wear and full-service tailor in Dearborn, Michigan. At the end of May, he will pass on the respon­si­bility and the wisdom to never compare yourself to others to Director of Student Activ­ities Ashlynn Landherr ’16, who took over from Manno in January.

“It’s some­thing that has always tugged at my heart, because it’s a family business, it’s a family legacy; there is a lot of pride and love asso­ciated with that,” Manno said.

His grand­father, an Italian immi­grant, opened the clothing store in 1974. Manno’s father entered the enter­prise about 35 years ago at age 25.

Manno’s father, now 62, also didn’t start work with his father imme­di­ately. At first, he served as a cor­rec­tional officer, passing his state police exam and being assigned to Cadillac, Michigan, before deciding to put family first and join his father’s business.

Striking it on his own, as well, Manno took the job as director of student activ­ities, on Vice Pres­ident of Student Affairs Diane Philipp’s rec­om­men­dation in 2013. Philipp said he was a natural for the job from the start.

Manno said he wanted to make sure he wasn’t going into retail because of guilt or a sense of oblig­ation.

Manno is cre­ative, but he said he likes to see things from start to finish. His goal while working for the Student Activ­ities Board was to bring more legit­imacy to the office.

“I can com­fortably say now I can justify every­thing we do here from an activity’s stand­point and how that relates to a liberal-arts edu­cation,” he said. “We provide an atmos­phere where you can apply what you’ve learned in the classroom, and you can go out and engage with your com­munity and create new friend­ships. I hope I’m leaving that.”

Philipp credited him for an amazing job cre­ating and holding events for the college and said she appre­ciates his ded­i­cation, deter­mi­nation, and desire to serve stu­dents.

“Of course, he would give all credit to the efforts of those who work alongside him,” she said. “He is humble, faith-filled, loyal and ded­i­cated to his respon­si­bil­ities.”

It’s true: He credited Philipp for her hands-off, sup­portive lead­ership style that pushed his cre­ative freedom, which he  said he strives to emulate in his own team.

Because both Manno and Landherr played bas­ketball for the Chargers, they refer to everyone who works for SAB, like junior Jake Kenyon, as team members rather than employees.

“He really encourages us to do our own thing and take own­ership of what we do,” Kenyon said. “He leads with a very light hand, and really, he just makes a point to be friends with everyone that he works with.”

Kenyon recalled first getting to know Manno while decom­pressing after Cen­tral­hal­la­palooza last year, three weeks into his work with SAB. Manno said he con­siders CHP, which will be his last event of the year, unbeatable as a favorite, because it reaches so much of campus.

“From our side of it, which nobody sees, you have this sweat, this cama­raderie, this hustle,” he said. “People don’t know, but they’re sitting in class next to people working so hard for this.”

Seeing people have fun makes the extra hours planning and long days setting up worth it.

“When we plan, and we put on all these things, and we see people having a ton of fun, we know that it was really well-received. You don’t need a survey after.”

Next year, he said he’s looking forward to par­tic­i­pating in school events led by Landherr as a “normal” alumni.

“SAB is in great hands,” Manno said. “There is not a person that is more fit to do this job.” 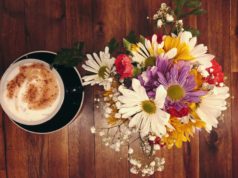