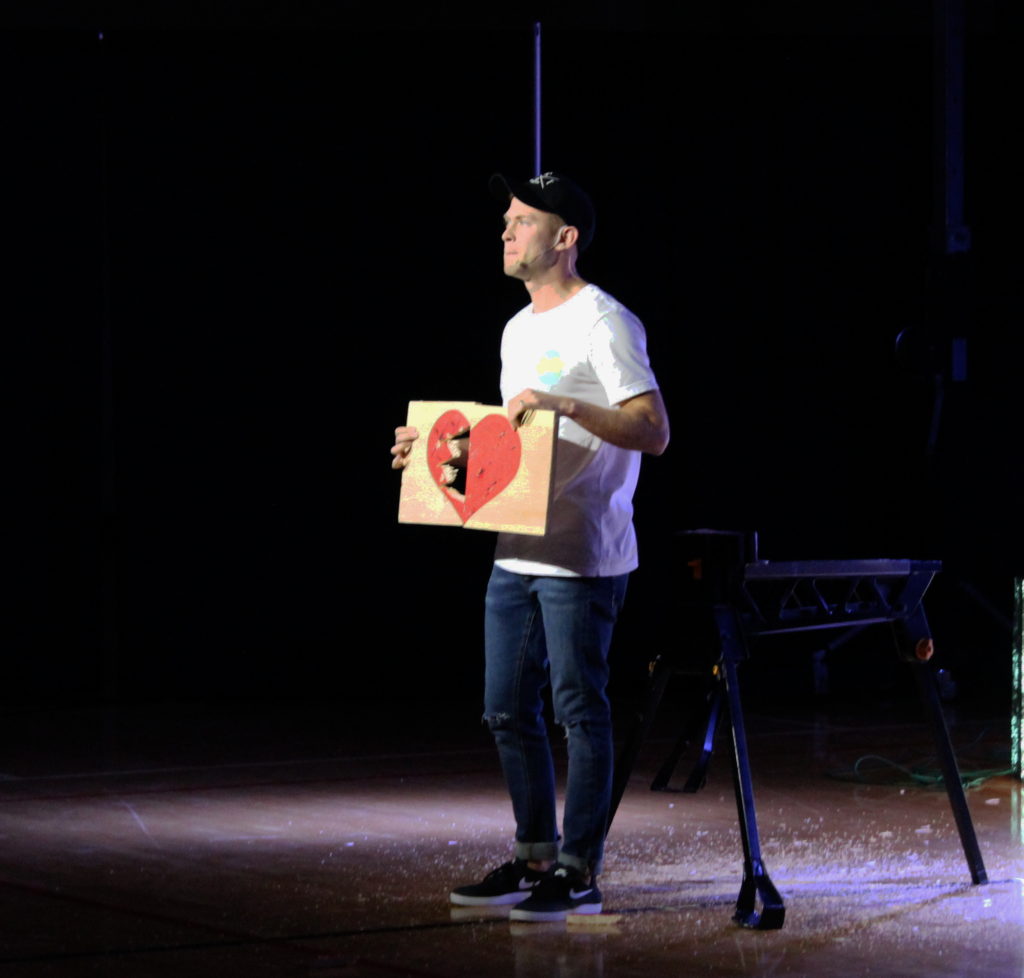 “It’s more than just putting on a ring and saying ‘Oh I’m waiting until mar­riage to have sex.’”

A young man in a white T‑shirt and jeans stood in the middle of the gym. He is older than the middle and high school stu­dents in the bleachers. A hint of stubble shadowed his jaw and a tattoo winded across his bicep. As with the 11 other speakers of the night, a silver ring was visible on his hand as he ges­tured.

“What this ring rep­re­sents — it’s a lot more than that,” Jimmy Edwards, the young man who addressed the crowd of high school stu­dents, said.

With the bright lights, dual pro­jector screens, and blaring music, the Jonesville High School gym looked more like a miniature rock concert than a dis­cussion on absti­nence.

It was Silver Ring Thing, a program ded­i­cated to informing young adults about absti­nence.

The show attracted around 150 stu­dents and parents, according to tour manager Mackenzie Te’o.

With skits, songs, and a Snapchat video taken at the beginning of the show, Silver Ring Thing’s per­for­mances are meant to appeal to teenagers.

Silver Ring Thing was founded in 1995 by Denny and Amy Pattyn. Based in Pitts­burgh, Penn­syl­vania, the program sends a group of 12 young adults aged 18 to 25 on a tour to promote absti­nence. Since 2000, it has hosted more than 1,200 shows in nine coun­tries.

One of the opening acts fea­tured a piece of wood with half of a heart painted on it. Drawing a vol­unteer from the audience, Edwards walked through detri­ments of par­taking in pornog­raphy. At certain points, another per­former, dressed in increas­ingly non­sen­sical cos­tumes, came out from back­stage and destroyed the heart, either with spray paint or by cutting it.

The climax of the skit was when the speaker put his now painted-over and cut apart half together with an untouched half. The point, he said, is this example illus­trates what happens when someone who has indulged in pornog­raphy or other sexual immorality enters a rela­tionship with someone who hasn’t.

“Every time you have sex, you give a piece of your heart away,” said the speaker, noting the jagged cut across the heart.

Silver Ring Thing also fea­tures a program for parents. The smat­tering of parents in atten­dance watched a video in another room, and heard from speakers of their own.

“The parent program was a good resource, just about par­enting kids through teenage years and some of the threats they’re facing and some of the oppor­tu­nities we can give them,” said Tammy Nohr, 46, who brought her 14-year-old son to the event. “I had heard some of the things before, but I think it’s a valuable oppor­tunity for everybody to come together and hear from young adults who have lived out the stuff and who can be a voice into their lives that is dif­ferent from their parents.”

Other parents, however, had a dif­ferent reaction.

“I think what they’re teaching here is really good for the parents who are clueless,” Tina Burr, 41, said. “I guess I can’t say it was not valuable.”

Burr said she brought her 16-year-old daughter, who took a vow of purity at her quinceañera, to the event as a reminder that there are others who have made similar promises.

“Because she goes to a public school, there’s not a lot of good support systems and even if a lot of the parents are teaching purity, it’s not a big ordeal,” Burr said. “I didn’t want to make her feel like she was alone in this process. That there are other people, young people her age that are doing this, wearing a ring and staying pure and waiting for the right man to come into their life.”

Student reac­tions to the program were more pas­sionate. Although some stu­dents seemed not to take the program seri­ously, others were pleased.

Claire, 13, said she was par­tic­u­larly fond of the sto­ry­telling aspect of some of the speakers.

“I know stories from the Bible are true, but it’s harder to visu­alize. It’s easier when you can hear it from someone who’s speaking straight to you about their own story,” Wortz said. “My favorite part was probably just learning and exploring what the real world chal­lenges are and what they’re going to be in high­school and college, when I’m on my own.”

The program expanded beyond absti­nence, though.

“Our platform is absti­nence, and it’s kind of a bait-and-switch, if I’m being honest,” said speaker Louis Phillips, 25. “This is the topic at hand, but really our goal is to tell you that there’s a God that loves you and that He wants a rela­tionship with you.”

The bait-and-switch works, though. At the Wednesday show, 21 stu­dents ded­i­cated their life to Christ, said Te’o.

As stu­dents and parents — who joined the stu­dents for the end of the show — wan­dered out of the gym and into the lobby to buy rings, the speakers took a photo with the kids who came to know Christ.

In the lobby, stu­dents and parents crowded around tables to buy rings at $20 apiece. Each ring has the citation for for a verse in 1 Thes­sa­lo­nians.

“We’re all on this team because we firmly believe in this message, because we firmly believe that this is what God has called us too,” Phillips said. “This is just one way, one avenue in our life that we’re obe­dient to Him. It’s not some­thing to be ashamed of. I think sex is planned in a beau­tiful way, that there are some pos­itive ben­efits to waiting the way God has asked us to.”