Stupid, provocative, oafish, and dan­gerous —  leftists in the media used those words and more to describe Ronald Reagan during his pres­i­dency. Six years later, those words seem an awful lot like those critics use to describe Pres­ident Donald Trump.

When you have a 7‑foot bronze statue of the man staring down at you on the quad, it’s easy to forget that Reagan was human. He faced stark crit­icism and protests during his admin­is­tration, largely because he dared to dra­mat­i­cally change the way America dealt with the threat of com­munism. Reagan, unlike his pre­de­cessors, dis­agreed with both the strategy of con­tainment and the more relaxed strategy of détente, arguing “the West will not contain com­munism, it will dismiss com­munism.”

Reagan refused to back down from what he knew was “evil,” even when con­tem­porary media accused him of war­mon­gering. As a result, his coura­geous action paved the way for the fall of the Soviet Union.

At the ded­i­cation of the Ronald Reagan statue at Hillsdale College in 2011, Cam­bridge his­torian Andrew Roberts gave a speech titled “Reagan’s Moral Courage,” in which he told Hillsdale stu­dents, “it takes tremendous moral courage to resist the over­whelming tide of received opinion and so-called expert wisdom and to say and do exactly the opposite.”

Donald Trump is not Ronald Reagan. He is his own man with his own faults, but his decisive bom­bardment of the Syrian airbase was cer­tainly coura­geous. For the past five years, a brutal dic­tator with no regard for human life mur­dered men, women, and children. Despite the use of weapons of mass destruction on civilians and the influx of mil­lions of refugees fleeing Assad’s tyranny, no one else in the West decided to chal­lenge the destructive regime.

While it’s natural to express fear over getting involved in another messy war, far too many have for­gotten the courage nec­essary to rebuke those who commit crimes against humanity. Red lines exist to prevent the most inhumane acts of vio­lence from occurring, like those described in the Geneva Con­vention regarding chemical weapons. As we learned one week ago when Assad again chose to gas his own people, red lines only work when we enforce them.

Even worse, accom­mo­dating the hostile Assad regime may encourage other antag­o­nists in the region and beyond. Whether we like it or not, the deci­sions our leaders make affect con­flicts all around the world.  Only after Pres­ident Obama’s failure to enforce the red line in Syria did Russian pres­ident Vladimir Putin invade the Crimean Peninsula. American weakness encourages hostile nations to violate inter­na­tional law.

Crit­icism of Trump’s decision comes from all sides. Many Amer­icans still remember the Iraq War and the resulting Middle Eastern mess. However, shooting 59 precise target mis­siles at an air­field does not compare to trying to bring democracy to a war-torn country. Pres­ident Trump’s missile strike has nothing to do with nation-building; rather, he reminded the entire world that the United States is back in the business of fear­lessly standing for our own national prin­ciples.

When we look at the statues of Hillsdale’s statesmen, it’s easy to forget the risks they took and the crit­icism they received in the aftermath. Yet, courage is doing what’s right despite the risk and crit­icism— Trump’s response to the Assad regime’s crimes embodies that.

Even though the chapel’s con­struction may prevent us from walking by the Ronald Reagan statue for the next two years, we should not forget why we honor him.  In turn, we ought to rec­ognize others who display and embody in our­selves an ability to make deci­sions not out of fear, ease, or popular pressure but rather by doing what’s right and just.

Mr. Diet­derich is a freshman studying the liberal arts. 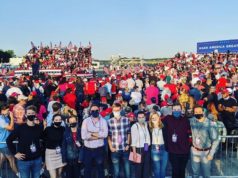 I went to a Trump rally. Here’s what I saw 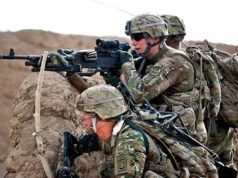