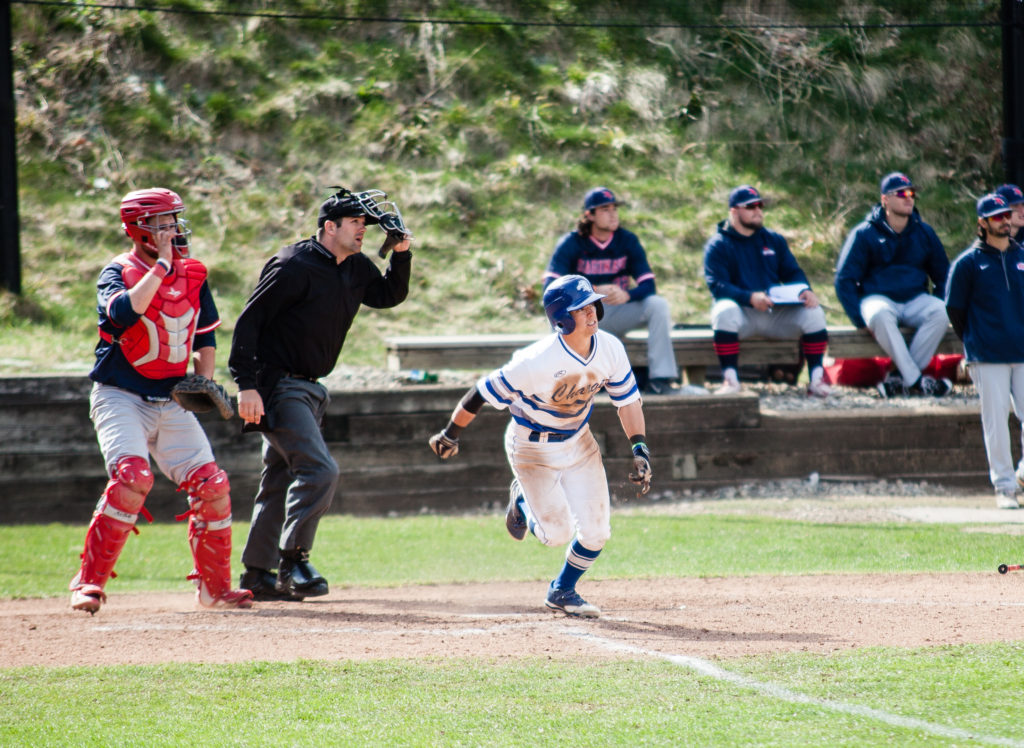 After splitting a crucial four-game series with the Grand Valley Lakers, the Hillsdale College baseball team dropped a non­con­ference game 9 – 5 to the Con­cordia Car­dinals on Wednesday.

The meat of the week was the split with Grand Valley, moving Hillsdale to 12 – 12 in the GLIAC, which places them at seventh in the con­ference with two weeks to play.

The series started on a sluggish note for the Chargers, dropping game one 8 – 0 at Simpson Field. Grand Valley junior Ryan Arnold was fan­tastic in the effort, throwing seven innings of three-hit ball. Freshman Jeff Burch had a solid start on the mound, throwing 6.2 innings for the Chargers, lim­iting the Lakers to four runs over his first six innings of work.

After game one, the Chargers honored their three seniors — Joe Chasen, Jared Piper, and Ethan Wiskur — for their com­mitment to Charger baseball.

“It was nice for the three of us seniors to get rec­og­nized for our time here with Hillsdale baseball,” Wiskur said. “I’m thankful that my parents were there to walk out beside me, because they have been my strongest sup­porters throughout my entire life and it felt awesome to share that with them.”

Theisen called senior day “one of the more emo­tional days of the year.”

“You’ve gotten to know those guys over the last handful of years,” he said. “For them to stick around and give their all to the team, there is just a lot of grat­itude for guys like that.”

After the fes­tiv­ities, the Chargers quickly found a stride in game two. After the Lakers scored two in the top of the first, sophomore Michael Mitchell tied the game with a two-run triple in the bottom half. At this point, Hillsdale starter junior Phil Carey settled in, blanking the Lakers in seven straight innings on his way to an eight inning per­for­mance in which he allowed three earned.

Sophomore Colin Boerst put the Chargers ahead when he doubled and scored on a passed ball in the third. Hillsdale added insurance in the fourth on an RBI single from sophomore Colin Hites, a bases loaded walk by sophomore Donald Ring, and a two-RBI single from Wiskur. Ring would add a solo homerun in the sixth.

When the teams headed to Allendale, Michigan, on Sunday to finish the series, game three belonged to Kruse and fellow junior Ryan O’Hearn, who earned hon­orable mention GLIAC pitcher and player of the week honors, respec­tively.

Grand Valley took a 2 – 0 lead over the first four innings. In the top of the fifth, however, a single from junior Alex Walts and a walk from Freshman Jake Rhodes brought O’Hearn to the plate, who gave the Chargers a 3 – 2 lead with a three-run home run.

“Ryan O’Hearn, man. It’s crazy how you can change the game with one swing of the bat,” Theisen said. “That was huge from him.”

Hites added one more run for the Chargers in the top of the seventh with an RBI single.

Kruse con­tinued his impressive season, tossing all seven innings, while allowing only two runs — one earned — and striking out a career-high 11 batters.

“Being my third year, I’ve been able to get sig­nif­icant innings, which has let me start to put some stuff together,” Kruse said. “I just have a mindset of com­peting against guys, thinking my stuff is better than what the hitters have, and then trying to win every pitch and every at bat.

In the series finale, the Chargers got off to a 2 – 0 lead in the first three innings, but failed to push any more runs across. The Lakers plated three runs in both the fifth and the seventh to bring the game to it’s 6 – 2 final.

“To be honest, this weekend was probably the best all-around baseball we have played all year,” Theisen said of his team after the weekend. “We did look like more of a veteran team.”

After the weekend, the Chargers hosted Con­cordia for a single game on what proved to be a tough night for Hillsdale.

The Chargers and the Car­dinals each pushed one run across in both the first and second, with Wiskur and Hites driving in runs.  After Con­cordia added two runs over the third and the fourth, sophomore Donald Ring tied the game at 4 – 4 with a two-run home run. Rhodes gave the Chargers their lone lead of the game later in the inning with an RBI triple.

The Car­dinals took the lead for good with two runs in top of the sixth, before adding three more over the final two frames. The Chargers were ham­pered by five errors over the course of the game.

Burch started the game for Hillsdale, hurling 5.1 innings in which he allowed six runs, although only four were earned. Red­shirt-freshman Joe Hamrick took over in relief, tossing 2.2 innings, allowing only one unearned run.

Theisen expressed frus­tration over the Con­cordia game and said his team needs to improve before its crucial four-game set with the last-place Lake Erie Storm on May 6 – 7.

“If we’re not careful next week, we will go into Lake Erie  and do the same,” he added.

The Chargers, who sit at 12 – 12 and seventh place in the GLIAC, will have an off-weekend before trav­eling to Lake Erie.

For now, the Chargers are left to prepa­ration and score­board watching, as they hope the first-place Northwood Tim­ber­wolves take care of business against Ohio Dominican. The Pan­thers cur­rently hold the final tour­nament spot at 13 – 10 in GLIAC play, and will host fourth-place Tiffin on the final weekend of con­ference play.

“We’re rooting for Northwood. The more games they can take from Ohio Dominican the better.” Theisen said. “But we can’t do any­thing about it. We’re just watching. Everybody else has eight games left and we will see how it unfolds.”