One road­block keeps Hillsdale res­i­dents from quality internet access: it isn’t yet prof­itable to extend the fiber optic network looping around the city to private homes.

That means city res­i­dents — and those in the sur­rounding town­ships and county — are limited to local providers that struggle to provide reliable, quality internet in a rural area, even though the city of Hillsdale has the infra­structure to access high-speed internet through the fiber network.

The conundrum is threefold: the infra­structure is out­dated in rural areas across Michigan, many com­mu­nities cannot afford to upgrade to the newest tech­nology (like a fiber optic network) to bring high-speed internet to their homes, and the big providers — like Verizon and AT&T — won’t service many of those com­mu­nities because their pop­u­la­tions are so sparsely dis­persed it’s not prof­itable for them.

Thus, many rural res­i­dents struggle to get reliable internet, a concern that state leg­is­lators and the Federal Com­mu­ni­ca­tions Com­mission are working to address.

Michigan House Rep. Donna Lasinski, Ann Arbor‑D, intro­duced a bill in January that would allow rural town­ships to levy taxes for the purpose of setting up their own township-run internet ser­vices. Lasinski, who rep­re­sents the 52nd dis­trict, said if under­served com­mu­nities want internet access, then local gov­ern­ments should provide it if private providers won’t. She described her bill as a “private-public part­nership,” because 80 percent of a township’s res­i­dents must vote to tax them­selves to implement the public service.

Lasinski said she authored the bill because there are “entire town­ships” in her dis­trict with no internet access at all.

“The statute already exists to allow town­ships to issue special assessment dis­tricts for improving roads, water, or sewage,” she said. “My bill adds a statute so that town­ships can set up broadband ser­vices so they’re not left behind in the digital age.”

Lasinski’s mission aligns with that of new FCC chairman Ajit Pai, who told a crowd of Cincin­na­tians in Sep­tember that he hopes to reverse this “digital divide.”

“The way I see it, every American who wants high-speed internet access should be able to get it,” Pai said. “Every con­sumer should have affordable choices in a com­pet­itive mar­ket­place.”

But Hillsdale Township, which sur­rounds the city of Hillsdale, told The Col­legian it’s not inter­ested in setting up an internet service for res­i­dents should Lasinski’s bill become law.

“It wouldn’t really be viable for us, it would not be a top pri­ority for us,” said Jackie Sul­livan, township super­visor. “I guess it would depend on if there’s an interest in an area of the township.”

Hillsdale County res­ident Jeff King must uproot his life and move three hours north because of the lack of reliable internet in the county crippled his ability to run his business. He relo­cated his business AeroData to Holland, Michigan in January and his house is up for sale, but it hasn’t sold yet. He told The Col­legian “half the county is under­served” with regard to decent internet access.

The city has dis­cussed launching a city-run broadband service, but doesn’t have the funds to do it, said Mary Wolfram, Hillsdale Director of Eco­nomic Devel­opment.

ACD.net, a private provider with projects in Michigan and Ohio, was able to install the fiber network in Hillsdale with the help of a federal grant — from the Broadband Tech­nology Oppor­tu­nities Program, part of the American Recovery and Rein­vestment Act of 2009 — with the con­dition it be used by private res­i­dents and busi­nesses. While that is ACD.net’s plan, it “just hasn’t hap­pened yet,” Wolfram said.

“Here’s the inter­esting thing about the free market: you can’t force that company to do it, it has to be prof­itable for them to want to do it,” said Mary Wolfram, Hillsdale director of eco­nomic devel­opment. “So we’re basi­cally waiting for ACD.net to do it. And they’re doing it alongside all of their other mil­lions of projects in the state of Michigan.”

Mean­while a fiber optic network that is now seven years old loops around the city of Hillsdale and promises more band­width at a faster rate than Frontier, Comcast, or any of the local providers. Until ACD.net and other more able providers can offer better internet, Lasinski’s idea to allow town­ships to decide to tax them­selves and set up their own service could be a good plan for rural com­mu­nities, said Hillsdale College Pro­fessor of Political Economy Gary Wolfram.

“Someone will be taxed who doesn’t want to, but that solves the free-rider problem,” Gary Wolfram said. “If you tax yourself to bring in the internet, your property values go up, and it incen­tivizes people to move there. I won’t say that’s a stupid thing to do.” 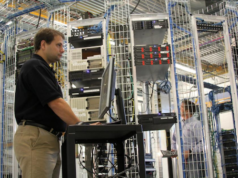 Faster internet around the corner