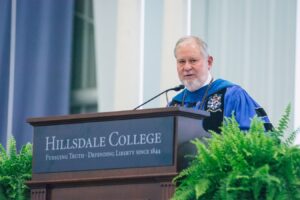 “As the stu­dents filed in, there was the din of voices — happy because of the renewal of friend­ships,” a reporter for the Col­legian described the mirthful 1925 fall con­vo­cation at College Baptist Church. Yet on April 6, 2017 stu­dents will sparsely pop­ulate the balcony and the side pews of the very same church because they do not value the cer­emony as they once did.

Stu­dents should treat con­vo­cation as an important com­munity event that reflects the unity of Hillsdale College. Many col­leges and uni­ver­sities do not gather as a single body at any time other than grad­u­ation. Even then, parents and fam­ilies fill up the the­aters and arenas where many grad­u­ation cer­e­monies occur, and lots of stu­dents stay home.

As a member of the chamber choir, I sat in the front of College Baptist at each con­vo­cation for the last two years. As Provost David Whalen and Pres­ident Larry Arnn remark on the state of the college, seeing empty seats always stuns me. The church should burst with stu­dents. The missing don’t hear Arnn attest to the ety­mology of the word “college” which comes from the Latin word col­legium, meaning part­nership. Yet there will probably be less than 200 stu­dents at this event, which calls the entire campus together for the affir­mation of our mission.

When incen­tivized, some stu­dents do come to this event. The Greek houses send their meager del­e­ga­tions to find out the winner of the schol­arship cup. Other stu­dents find their way into the church if the speaker is inter­esting, like Brother Guy Con­sol­magno, the director of the Vatican obser­vatory, who spoke last spring about the impor­tance of wonder in the sci­ences. But stu­dents should look forward to this event as it is an important moment of cel­e­bration for the college com­munity.

Pro­fessor of history Tom Conner, who has taught at the college since 1983, showed his rev­erence for the cer­emony, writing in an email that “the oppor­tunity Con­vo­cation affords us all to come together twice a year and refresh our mem­ories about our fun­da­mental pur­poses as a com­munity is extremely valuable.”

We are lucky to hold con­vo­ca­tions at all. The tra­dition fell away when the college aban­doned mandatory chapel ser­vices in 1964. The cer­emony did not reappear until the late John Reist, a pro­fessor of English, res­ur­rected the tra­dition in 1989.

“The Spring Con­vo­cation has taken on addi­tional impor­tance as the first occasion that the grad­u­ating seniors appear, together, in the robes that they will wear on Com­mencement Day, and the ‘top ten’ grad­uates are rec­og­nized,” Conner added. He also empha­sized that “the lead­ership of the grad­u­ating class and the rising senior class exchange the gavel to sym­bolize the inevitable pro­gression of the dif­ferent classes through the College.”

Hillsdale College states the purpose of con­vo­cation on the website. It “help[s] remind us of our common pur­poses and mission. [It is] held in a church and include prayer as an expression of the college’s identity and in grat­itude for all its blessings.” The statement also declares that all offices, if pos­sible, should close for the con­vo­cation cer­emony so that the college com­munity as a whole may attend.

We are blessed that the college pre­served this tra­dition and we should honor it with our presence at the cer­emony. We should sit in the pews smiling, like the stu­dents before us, “happy because of the renewal of friend­ships,” excited to remember and to reaffirm our purpose as partners in scholarly work and in life.

Students reflect on their time in quarantine

Do your summer reading