When you walk down North Howell Street late on a Friday or Sat­urday evening, one patch of windows on the store­front illu­mi­nates the dark street. Peek inside, wan­dering way­farer. You’re welcome, and they’re open all night.

It’s just after 9 p.m. on Friday at the Palace Cafe, a diner wedged into a store­front in downtown Hillsdale. Thirteen booths, 11 bar stools, and a couple tables line the floor of the restaurant, inviting friends and strangers in for a coffee, a meal, and a con­ver­sation. Over the next nine hours, this greasy spoon will welcome nighttime reg­ulars and curious new­comers as friends.

The night begins with a cup of hot coffee (two creams, no sugar), and an ice water, please.

Two cus­tomers settle into a booth, halfway between the kitchen and the reg­ister. They’ll have a basket of chicken strips, a ham-and-cheese sandwich, and two plain cheese­burgers to-go. At half-past 9, a family clambers through the front door, and the six of them gather around a long table tucked in the back corner of the room. Now that the early crowd has assembled, Kim and Dan, the couple who run the show, make their entrance.

Back in the kitchen, Reagan scrapes the grill with a wide metal spatula. She’s 19, and she’s only been working the Friday and Sat­urday overnight for a month and a half. It’s just her in the kitchen on these nights, so she handles the rushes single-handedly, manning two big grills to flip burgers, fried eggs, and pan­cakes.

A bell rings out over the clatter of the kitchen just as Kim ties her apron behind her back, joking with the table of six about her tar­diness: “I’ll wait on you if you wait on me,” she laughed.

After scrib­bling six orders onto her pad of guest checks, she turns to the couple in the booth to greet Debbie and Larry Kendell, who are there for dinner, just like they always are on the weekends.

“We’ve got lots of good friends here. People who we care about,” Debbie Kendell said.

For this Hillsdale couple, life hasn’t been easy, and the Palace is a place of refuge. Larry grew up in the foster system, living in a state house in Cold­water, Michigan, just a town away. He moved to Hillsdale before he reached legal adulthood to live alone. But on a cold Michigan night 35 years ago, he went to Broad Street and hap­pened on Debbie, homeless, and wearing nothing but tat­tered shorts and a tank top. The next day, they were engaged. The day after that, married. Thirty-five years later, they’re still together.

“Tomorrow is our anniversary,” Debbie said.

As the couple fin­ishes their dinner, they catch a few moments with Kim, who leans against the high back of their booth to check in. She knows them — not just their faces and names, but their stories. Kim teases Debbie about her temper, and reminds Larry that he’s got a strong woman. The couple says good­night, and heads out the door.

By the time Kim pours the second cup of coffee at 11 p.m., the crowd has grown to seven. A college kid chats with his parents and another student, some locals bite into a late-night snack, and a few more stu­dents load up on cheap, greasy eats.

Dan and Kim have six kids, the oldest 22 and the youngest 14. The two work well together, teasing each other in front of the cus­tomers as a means of enter­tainment.

“Kids like the smart-aleck stuff we say back and forth to each other,” Kim said as Dan rolled his eyes.

The couple works in rhythm with each other for the entire night shift. Dan does laps around the restaurant, col­lecting dishes, refilling ketchup bottles, and stacking packets of jam. Kim crosses his steady path, bouncing from table to table as she scribbles orders and rec­om­mends the cin­namon-roll pancake, her favorite item on the menu.

A third cup of coffee brings in the rush, just around 1 a.m. The cafe crew swells to 27: college kids teeter in, either clumsy from a few drinks or just frozen stiff from the cold. A chatty group com­man­deers two tables nearest the kitchen, filling the place with noise and laughter and cheer — pan­cakes all around.

This is the crowd the third shift is made for. Kim and Dan have worked on the Palace’s overnight skeleton crew since it opened for Friday and Sat­urday nights in the fall 2013, and they said they’ve seen a change in their nighttime cus­tomers over the last four years. They ini­tially spent their evenings flipping flap­jacks for Hillsdale res­i­dents looking to sober up after a night out, but that didn’t last long.

“Now I’d say we’re here because the college kids are here,” Kim said, leaning on the counter, drinking an apple juice her husband had poured her. “It’s all about pan­cakes and edu­cation.”

Kim said she’s never had a problem with rowdy stu­dents. Her only com­plaint? The straw wrappers they litter on the floor.

Kim and Dan said their favorite part of the night shift is asking a pack of oddball col­le­giate cus­tomers where on earth they’re from.

“You guys got some world-changers coming through here,” Dan said. “It’s pretty cool.”

By 1:30 a.m., 36 people are ordering late-night break­fasts and the staff is hopping. A trio of girls decked out in sum­mertime shirts under winter coats discuss the rager they just left — fun, but better for people-watching than for dancing. They talk and eat but do not linger, morning plans nudging care-free con­sciences to respon­si­bility.

“You’d be sur­prised at the amount of food boys can consume,” a cus­tomer remarked later. “It’s like they have a hollow leg.”

It’s 2:30 a.m. now, and sud­denly a line 15-deep appears at the cash reg­ister. Stu­dents fish through their wallets for a few dollar bills. The Palace has a cash-only policy — mind-bog­gling for the mil­lennial who always pays with plastic. As the college kids shuffle forward one by one, Michael Jackson’s “Thriller” plays for the second time that night. Perched at the bar, freshman Samuel Musser swivels on a stool, observing it all.

“Some of the best con­ver­sa­tions of my life have taken place at the Palace,” he said. “Sunday after lunch, talking about life direction and purpose … late-night dis­cus­sions of the values and themes of ‘La La Land.’”

There are only two people in the cafe besides Dan, Kim, and Raegan: Grace and Wayne, old friends. They’re longtime Hillsdale res­i­dents and Palace reg­ulars, and they’ve both worked there at one time or another. Tonight, though, they’re drinking coffee, stepping out for cig­a­rettes, and enjoying the company only the Palace can provide.

Grace likes to stay up late — probably because she was born in the evening, if you listen to her mother’s rea­soning. She said she remembers moving to Hillsdale and getting a job as a waitress at the Palace, back when they still served old-fash­ioned sodas.

“I like that this is open on weekends,” she said. “If you went to the bar or a party, it’s always here. You can come and get coffee or a whole meal. The help is always super nice. It’s like getting waited on in your own home. Every waitress here takes a per­sonal interest in you.”

Wayne has been coming to the Palace since he was 6 years old, right after he moved to Hillsdale with his mom and brother. He’s worked here, too, and on nights like tonight, he jumps up to help Dan and Kim when the restaurant gets busy.

“Dan and Kim are my best friends, so I’m here all the time,” he said.

At 5 a.m., only one hour of the third shift remains. Three cops saunter in, just fin­ished with their own long night of work.

It’s 6 a.m. now, and the last swallows of coffee turn bitter and cold in the bottom of the cup. Kim and Dan grab their things, say their goodbyes, and head out the back door.

The sky hasn’t changed much since the cafe opened up nine hours earlier, and the Palace’s facade con­tinues to glow like a hearth in the still-dark downtown Hillsdale. Tonight, it has wel­comed packs of college friends, huddles of unwa­vering com­panions, and the restless wan­derer. 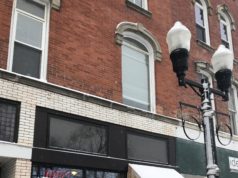 Pancakes on pause as Palace closes 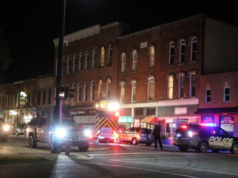 Employee responds quickly, puts out fire at the Palace Cafe