David Katz’s original play “Muse of Fire” will tell the modern-day story of a sor­cerer and his apprentice in a battle to the death at 8 p.m. Friday in Markel Auditorium.

Katz, a con­ductor, play­wright, and actor, per­forms as seven char­acters in this one-man play based on his own life as a young student at the Pierre Monteux Con­ducting School in Maine.

His teacher, the leg­endary and tyran­nical maestro Charles Bruck, pro­vides the inspi­ration for the sor­cerer in “Muse of Fire.” The play follows the apprentice as he rec­ol­lects his expe­rience, going from fearing and hating to greatly loving his teacher.

“This is par­tic­u­larly fun home­coming for me,” said Katz in a post on “Muse of Fire’s” Facebook page. “I was on campus many times between 1988 – 2000, when I was music director of the Adrian Sym­phony Orchestra — none happier (before this weekend) than in 1992, when I led the ASO and Hillsdale Choirs at the ded­i­cation of the Sage Center for the Arts.”

Music Director James Holleman said he saw “Muse of Fire” last March and decided to bring the show to Hillsdale as a part of the Pro­fes­sional Artists Series.

“I found it to be inter­esting and enjoyable,” Holleman said. “And yes, there is a strong con­nection to the theme of studying con­ducting. Though in a broader sense it speaks to the student-teacher rela­tionship from the view­point of the student after many years. I think many people will connect to the story.”

Peter Van de Graaff, host of WFMT Fine Arts “Radio Music Through the Night,” praised the show for its humor and gravity.

“It is a one-man play about the art of con­ducting,” Van de Graaff said. “It is about a man and his mentor, who is an intense, almost abusive man, but what he draws out of this con­ductor is the art of feeling music, of truly living the music … I’m someone who has spent a lifetime in music, as both per­former and broad­caster, and I came away with a much deeper love of music from this play.” 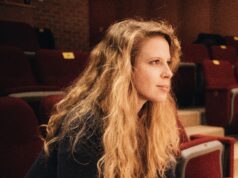 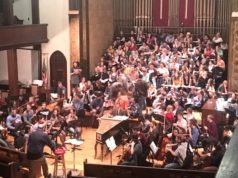 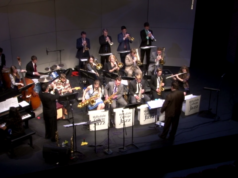